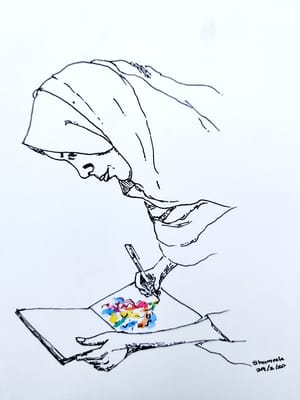 Lessons for Women in Seeking

The discourse around Muslim women in India has been limited to a few aspects, most of which revolve around rescuing them from their apparent oppressors – their own community and Muslim men in particular. But what do Muslim women dream of? What do they aspire to be? What are their everyday practises of being in faith? None of these factor into how Muslim women are described in Indian academia, or the media. The stagnancy of this discourse has long been exposed, and voices are breaking through this enforced discursive hegemony to speak for themselves. One such aspect of this project is also to reclaim lost Muslim history, where women have been decision-makers, Islamic scholars, transmitters of hadith, teachers of reputed scholars, and much more. While works such as Shaykh Akram Nadwi’s Al-Muhaddidat and Asma Sayeed’s Women and the Transmission of Religious Knowledge in Islam has contributed to our knowledge of many such women scholars, popular knowledge and familiarity of many of these women is scarce and Muslim women unwittingly find themselves devoid of their histories of scholarship.

One such woman was Nana Asmau’u bint Shehu Usman ‘dan Fodio (1793-1864), an Islamic scholar, poet, educational leader and the daughter of Usman ‘dan Fodio of the Sokoto Caliphate, the area of which corresponds to Northern Nigeria today. The Fulani Fodio clan followed the Qadariyya order, and many of them were scholars who wrote in Arabic, Hausa, Fulfude and the vernacular Tamasheq. The Sokoto Jihad was a significant part of 18th-century Hausaland, where Islamic scholars and leaders launched reform movements to correct many of the un-Islamic practises prevalent in society despite many kings having outwardly embraced Islam. Shehu Usman was one of them. Shehu Usman came under severe pressure from such rulers for advocating Islamic values and orthodoxy in their village of Degel, which became a model community for Islamic values of righteousness and piety. He also condemned the buying and selling of slaves. When he was forbidden from preaching and hounded, many men and women rallied to support him against the ruler of Degel, and thus the Sokoto Caliphate was established after much struggle. In his household, there were many such women teachers and scholars, similar to many other households across West Africa in that period. As Hussein Kamaly notes, the “Fulani Jihad…re-directed the course of Islam in Africa.” Women in general and Nana Asmau’u most luminously, had a major part to play in this. Shehu Usman was a great influence on her advocating for women’s education. He wrote “[These men] condemn their wives, daughters and female relatives to a vegetative life, like animals. They mistreat them like pots and pans, and once broken after long use, toss them on a dung heap…”

Nana Asma’u began to commit herself to the women of the Caliphate – to their complete educational, social and personal purification and training. While also challenging the many un-Islamic practises that were followed in Hausa society, much of which involved women, she established a structure of teaching known as yan-taru where each woman teacher that she personally trained known as jaji would go to remote areas and spread

knowledge about the Qu’ran, the Sunnah, personal hygiene, proper forms of dressing, healing and so on. Nana Asmau’u and the teachers would use poems, mnemonic devices and other methods to instil correct knowledge and ensure it was remembered. For Nana Asmau’u, freedom was not a liberal construct outside of Islam – she saw the mistreatment of women as a direct violation of the Sunnah, and freedom to mean freedom from jahiliya, or the existence of practises which corrupted society and did not change the status of the most marginalized groups. Even after her death, Nana Asmau’u remains a very important figure across West Africa, and many women consider her legacy to be the reason they have been able to access education and knowledge of the correct Islamic practises to follow.

What lessons do we draw from such women? One lesson that we can draw is that education need not be necessarily formal or acquired through schooling. There are many women in our communities who have been denied this right. But it does not mean that it’s too late, or that the doors of knowledge have closed. If anything, we see that those denied access to formal education actively seek out other ways to teach themselves what they could not earlier, such as through the Islamic movement, or social media. Secondly, there is a need to emphasize the way we articulate our understanding of the injustices faced as women. Too often, experience of gendered injustice leads to women embracing ideologies that are in direct contradiction with Islamic teachings, or towards laying blame on the deen itself. In connection, many articulations of gendered injustice are also unfairly labelled as ‘feminist’ or dismissed. Neither road is fruitful for the community or Muslim women. Nana Asmau’u and her community of teachers found ways to highlight injustice and silencing without deviating from their faith. Finally, coming back to the many incidents of violence, discrimination and exploitation that we see and experience, it is important to emphasise on the need for community – and not just any community, but a watchful, witnessing community which reaches out to each other in times of trouble and offers paths of personal healing as well as ways to hold people accountable for their actions. The specific events of Nana Asmau’u’s life may be very far from us, both in terms of space and time. But these lessons transcend geographical boundaries and enable us to remember that there are possibilities beyond the limitations that society often lays down for us; possibilities that are enshrined in our own deen.