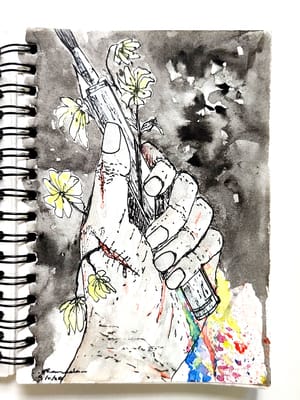 Growing up at home, we never realised that we were “just sisters”. Whenever someone asked us about our siblings we’d tell them how many sisters we are and that’s it. The immediate question shot at us would be, “No brothers? Not even one”?

As though, if there was even one brother we’d hide it and still say no brothers! This was the norm and I assume it was coming from a good space so it became natural for us to add, “And no brothers” at the end of our response even before they’d ask us. This would usually be followed by a long, “ohhhhh” with a click of sympathy and some would give us a TED talk on how girls are not different from boys these days.

During Jahiliyyah period (period of ignorance before Prophet Muhammad ﷺ), the father’s face would turn dark upon hearing the news of a girl child. Cut to 14 centuries later, not just the father, but the entire families and the societies grieve the birth of a female child and celebrate the birth of a son with pride. Sometimes even the mothers mourn the arrival of their
own kind.

To have a desire for a son is not wrong but to not desire for a baby girl or get disheartened on her birth is a sin. As it is in the control of Allah to give you whatever He wishes. Treating girls as a burden or thinking of them as lesser than sons, implies that you’re not being grateful to Allah in whatever He has blessed you with in His ultimate wisdom.

We may have stopped physically burying the daughters alive, but their emotional and mental burial continues.

Mothers are still subjected to pity for having a girl and sisters are thought to be missing something big in their lives because of not having a brother. Parents do have a favourite child and often favouritism lies just under the surface (read gender). Society looks at boys as investment and girls as a liability.

Daughters are a huge blessing and an honour by Allah SWT. Treat them like one.