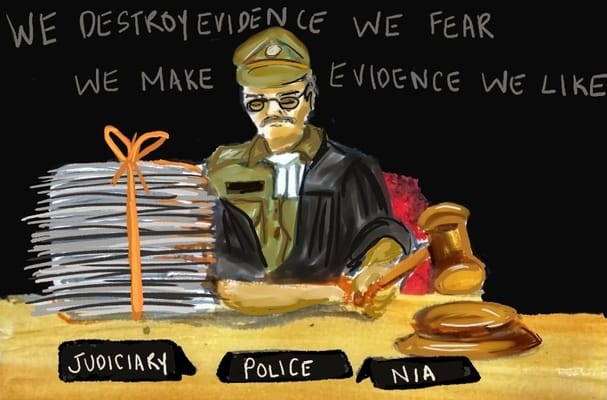 In India’s state of Uttar Pradesh, the police have booked 86 people under a new law. 79 of them are Muslims. The police accuse them of luring Hindu women, marrying them and converting them to Islam. They have been booked under the “Uttar Pradesh Prohibition of Unlawful Conversion of Religion Ordinance 2020”, a law that has gained notoriety by the misnomer – “love jihad” law. India is ruled by the Bharatiya Janata Party (BJP) at the federal level and it has chief ministers in 12 of the 28 states in India. Recently, the BJP-ruled states of Uttar Pradesh and Madhya Pradesh have passed these “love-jihad” laws with 3 more states run by India’s ruling party announcing their intention to follow suit. For the BJP and its proponents, these laws are meant to stop a conspiracy hatched by Muslims to spread Islam by what they term as “love jihad” which alleges that Muslims are encouraging their men to marry Hindu women by allurement and enticement and then forcing them to convert to Islam. While this may sound a bizarre accusation, it has been accepted by the majority community in India with almost zero resistance by the political parties who are in the opposition. A few sane voices have filed lawsuits challenging these laws but India’s apex court has declined to stay these laws. The Supreme Court of India has posted the hearing for a later date and issued notices to the Centre and the two state governments that promulgated these laws. So why have these laws been passed? What impact does it have on the Muslim community in India? How do these laws appear through the prism of fundamental rights and the status of women? The entire episode is symptomatic of the position of minorities in India and poses a grave threat to the communal fabric of Indian society.

Part of a political strategy

These laws appear to be part of a time-tested political strategy to stoke the fires of emotional issues among the public and use it as a diversionary tactic to deflect the attention from basic bread and butter issues and the many failures of the government. However, this is not a new ploy to harass the Muslim community in India. According to Delhi University historian Charu Gupta, there are uncanny resemblances in the ‘love jihad’ campaign with the abduction campaigns pursued in the early 20th century by Hindu reformers. This obnoxiously false narrative was again revived from the late ‘90s. It was widely reported in the media that the Vishwa Hindu Parishad (VHP), an organisation classified by the CIA as a militant religious organisation, circulated pamphlets during the elections in Gujarat in 2014 that talked of “Muslim boys being taught to seduce Hindu girls and trap them into marrying them. After marriage, the girl is turned into a child-bearing machine, pushed into sex trade or sold to a sheikh in Saudi Arabia.” This fabricated narrative was peddled by leaders of the ruling party, its affiliated organisations and a large section of the Indian media that finally culminated in the passage of these anti-conversion laws. The brains behind these laws may be justified in their assumption that it will solidify the image of the BJP as the true ‘saviour’ of Hindus and it may reap immense electoral benefits in the upcoming elections in different states of India. However, our nation will pay a very heavy price for this charade by the right-wing to ‘protect women’ and ‘save their honour’.

Legal experts point out that this law is against the constitutional vision, personal freedom and civil liberties guaranteed by the Constitution of India. It tries to take away the freedom and autonomy given to two individuals to choose a partner of their choice. The central government has acknowledged in Parliament that they do not have a definition of ‘love jihad’, nor has any intelligence agency of the centre informed them about such a tendency. The quantum of punishment for those convicted under these laws is 10 years. Such harsh punishment is given to highly serious crimes like robbery, miscarriage without women’s consent, kidnapping with an intention to murder, waging war against the state, mutiny, collection of arms. Is marrying someone that serious an offence? Either there is something wrong with the legal advisors who drafted this legislation or the government wants to give a communally polarizing message that if Muslims try to marry Hindu girls then they will be treated in the same manner as enemies of the nation. Marriage and divorce are purely private and personal matters that are best left to the civil courts. There are adequate provisions under civil law to initiate nullification proceedings in marriage if one of the two hides or fakes his/her identity and religion. If adequate remedies are present under civil law there is no need to invoke criminal law. Those petitioning the judiciary to intervene and stay these laws have cited many previous judgments that affirm their plea. For example, In Salamat Ansari and Ors vs State of Uttar Pradesh and Ors (Crl. Misc. Writ Petition No. 11367 of 2020), it was held by the Allahabad High Court that, “Right to live with a person of his/her choice irrespective of religion professed by them, is intrinsic to right to life and personal liberty. To disregard the choice of a person who is of the age of majority would not only be antithetical to the freedom of choice of a grown-up individual but would also be a threat to the concept of unity in diversity. An individual on attaining majority is statutorily conferred a right to choose a partner, which if denied would not only affect his/her human right but also his/her right to life and personal liberty, guaranteed under Article 21 of the Constitution of India.”

Our Constitution, under Article 25 allows the freedom of conscience and free profession, practise and propagation of religion. The Muslim community does not encourage the act of interfaith marriage, as they are religiously obliged to marry within the community. It is a different matter if people desire to accept Islam of their own free will and become part of the Muslim community. It then becomes incumbent upon Muslims to help such individuals assimilate within the community and learn to practise their new faith. Islam does not encourage celibacy nor is there any preference in Islam for “born-Muslims” over those who accepted the faith voluntarily. Therefore, the question of avoiding marrying Muslim girls and boys who reverted to Islam does not arise. Still, it cannot be denied that these laws will now create a fear-psychosis among Muslims whenever such a situation arises. These laws make it mandatory for a person who desires to change their religion to give a declaration in the form at least sixty days in advance to the district magistrate or additional district magistrate that they wish to convert of with their free consent and without any force, coercion, undue influence or allurement. It is common knowledge that self-proclaimed Hindu vigilante gangs begin harassing Muslims openly whenever any marriage between a Muslim boy-Hindu girl comes to their knowledge. It will bode well for the Muslim community to follow the Qur’anic ayah (41:34) which says: “(O Prophet), good and evil are not equal. Repel (evil) with that which is good, and you will see that he, between whom and you there was enmity, shall become as if he were a bosom friend (of yours).” The ayah points out that even if the forces of evil stir a dreadful storm of mischief and malice, evil is self-destructive in nature and causes its own demise. In contrast, if the forces of good, which appear to be utterly helpless and powerless, go on operating and working, they become dominant in the end. Muslims should follow this policy laid down by the Qur’an and soon enough the hoax of “love-jihad” would die its own death.

It will bode well for the Muslim community to follow the Qur’anic ayah (41:34) which says: “(O Prophet), good and evil are not equal. Repel (evil) with that which is good, and you will see that he, between whom and you there was enmity, shall become as if he were a bosom friend (of yours).”