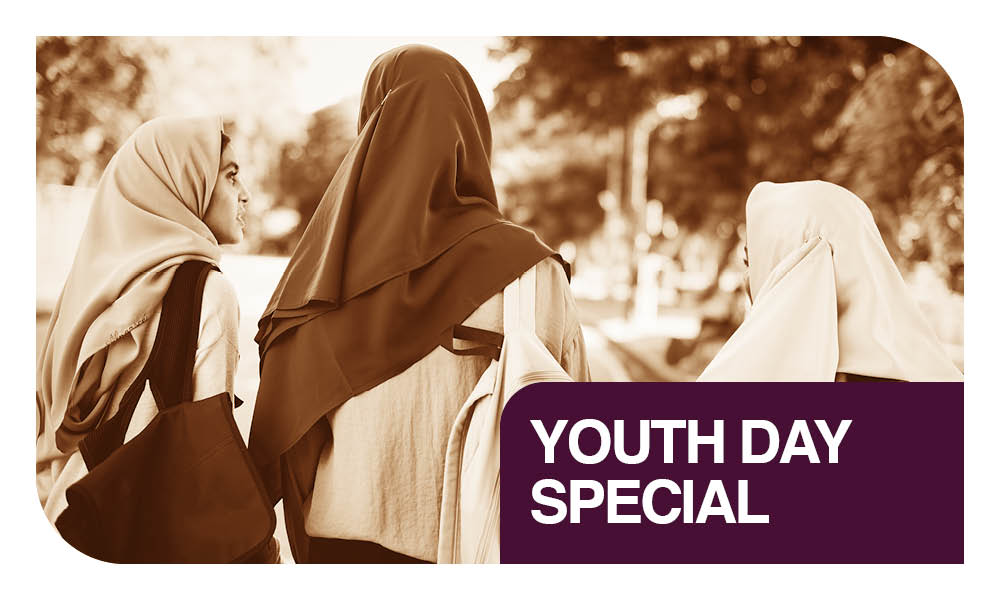 Category : FAMILY
Author : SK Sanah Farheen
The prime age in which Ibadah or worship is most beloved to Him is during the period of youth and the noble Quran brims with examples of youth who, in spite of having all the rush, vigour, vitality and charm dedicate their life to the pleasure of the Creator – be it Musa, Ibraheem, Yusuf or Maryam (may peace be upon them all)..

Youth and the period of youthfulness is a cherished ideal often found in poems, films and books, one that is characterised as a period of joy. No wonder then that every child aims to reach that stage, while the older do not want to get past it.

Our Lord knows it best, and thus, He has promised to bestow eternal youth in Paradise. On the Day of Resurrection, when people will be submerged in perspiration, ‘those youth’ will be granted refuge who spent their life in awe and sought the pleasure of Allah.

The Prophet, peace and blessings be upon him, said, “There are seven whom Allah will shade on a day when there is no shade but His. They are a just ruler, a youth who grew up in the worship of Allah, one whose heart is attached to the mosques, two who love each other, meet each other, and depart from each other for the sake of Allah, a man who is tempted by a beautiful woman of high status but he rejects her, saying, ‘I fear Allah,’ and one who spends in charity and hides it such that his right hand does not know what his left hand has given, and one who remembered Allah in private and he wept.”

Youth in the Quran:

The prime age in which Ibadah or worship is most beloved to Him is during the period of youth and the noble Quran brims with examples of youth who, in spite of having all the rush, vigour, vitality and charm dedicate their life to the pleasure of the Creator – be it Musa, Ibraheem, Yusuf or Maryam (may peace be upon them all).

The Quran mentions a man who was killed by his people and was promised the hereafter in return. “Would that my people could know, With what (munificence) my Lord has pardoned me and made me of the honoured ones!” (Surah Yaseen: 27)

Supplication of the Youth
Another example of conscientious youthfulness is what has been mentioned in Surah Al-Kahf: the youth who sought refuge in the cave to be saved from the evil practices and rituals and submitted themselves to the one true Creator.

“Remember, when those youths took refuge in the cave, and said, “Our Lord! Grant us mercy from Yourself and facilitate & rectify for us all our affairs.” Surah Al-Kahf: 10

What do all these examples teach us – Standing up for yourself, your beliefs and what you hold upright. Youth has always been the symbol of standing up for justice, benevolence and against tyrannical leaders and systems for ages.
To look beyond the realms of falsehood and despair, to search for lost keys of treasures hidden in the universe: be it Mendel who gave principles of genetics way before the world could decipher, let alone acknowledge his work or Muhammad bin Fateh who conquered Constantinople (now Istanbul) at the tender age of 22.
There are plenty of examples of world leaders and renowned personalities who channelized their youth for the welfare of humanity, who channelized their vigour and vitality for the actualization of the higher self, moving beyond selfish motives or needs.

Fatema bint Muhammad will be the leader of women in Paradise because she valiantly endured the trials of life with patience and steadfastness, which is an extraordinary inspiring example for girls and women today. Fatema grew up in hardship during the Year of Sorrow, when her mother died and the Quraysh were cruel to her father. For her entire life, she shrugged off the life of comfort and embraced simplicity and poverty with grace, piety and nobility.

When 74 leaders, warriors, and statesmen of Madinah descended on al-Aqabah to swear an oath of allegiance to Islam, the new religion in the city, Nusaybah bint Ka’ab (Umme Ammarah) and Umm Munee Asma bint ʿAmr bin ‘Adi were the only two women to personally pledge directly to Prophet Muhammad (pbuh). Nusaybah always stood at the forefront in wars as well, to be declared ‘The First Woman Warrior of Islam.”

Asma bint e Abu Bakr had unrivalled strength and courage to show wit and ingenuity. When the disbelievers were after the life of the Prophet (pbuh), Asma tied and provided food with the two belts of her cover, and for which she received the title Dhat an-Nitaqayn: “Lady with the Two Belts” from none other than Prophet Muhammad PBUH.

When the Quraish differed on the placing of Hajrul Aswad and a civil war was about to break out on the issue, Prophet Muhammad (pbuh) resolved the conflict by asking a representative from each of the tribes to hold the edges of the cloth and restore it to its original place, thereby making peace and resolving conflict with wisdom.

The multiple life examples of Prophet PBUH as a youth role model are profound: when he tied stones to his stomach to beat hunger pangs, setting an example of being a leader who goes the extra mile ahead of his followers or helping an aged woman who kept warning him about a magician in town and shouldering her burden or attending to the woman who threw filth upon him daily, or forgiving the entire town of Taif.

Youth and Positive Change in Society:

These and many such examples portray to us the charm and legacy the ‘youth’ behold from time immemorial. It is important to aspire and look up to such role models for inspiration, avoid despairing in the miseries and the lowly impulses in life.

This Youth Day, let’s stand up for what we believe. Let’s raise the bar and aim for higher standards to live and die for.