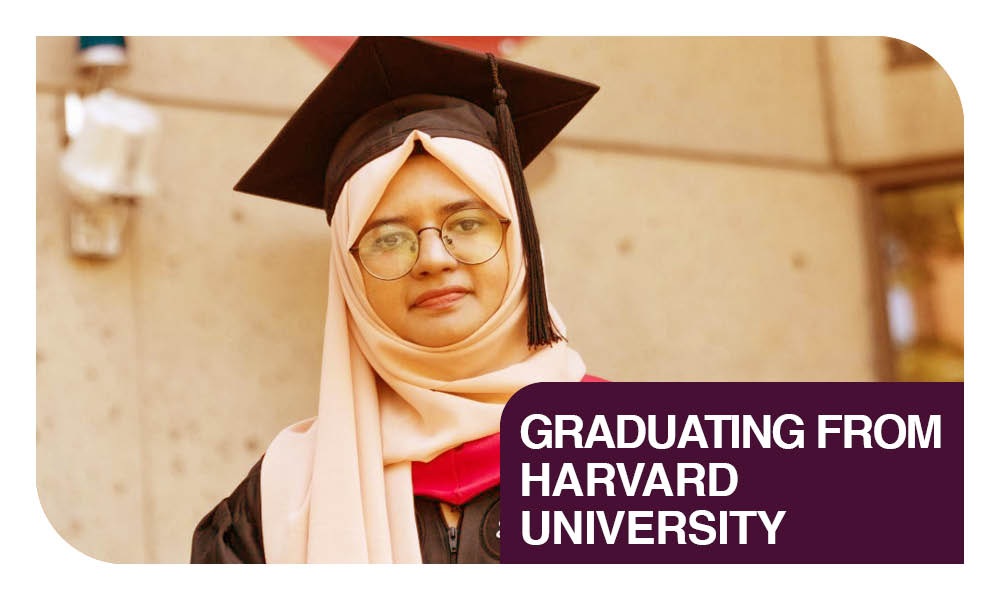 Category : SUCCESS STORIES
Author : Sapna Saleem
As a hijabi woman, I came here with many apprehensions in terms of how I would be viewed and treated. As someone from a middle-class environment, I was also apprehensive about how I would be able to cope in an elite institution, an Ivy League such as Harvard.
Harvard was a name that I had often heard on television and read about in newspapers. It was never a dream to go to Harvard. It was not something I expected to be able to do. But here I am, graduating with a master’s degree in Education from Harvard Graduate School of Education this year. My school is one of the 12 graduate schools at Harvard apart from Harvard College.
I recognise that unfortunately, everyone may not always have a positive experience in a foreign country or in a university. I would like to share a bit about my experience at Harvard. This was my first experience in an educational institution in the US.

As a hijabi woman, I came here with many apprehensions in terms of how I would be viewed and treated. As someone from a middle-class environment, I was also apprehensive about how I would be able to cope in an elite institution, an Ivy League such as Harvard. Alhamdulillah, in all my years of being a student, this has been an experience where I felt most welcomed and most heard. On reflecting on the reasons for this, I think about the environment that the university creates for all students and the specific attention it gives to nurturing the identities of students. Here are 3 surprises that I had along the way.

● The professors – I did not expect professors in an elite institution to be as approachable and as humble as I have found them here. From the first day of class, professors made it clear that they and we are all peers and not higher than or lower than anyone in the classroom. Small things such as not requiring permission to enter or leave the class anytime, use our devices, or disagree with the professor’s ideas surprised me. Having studied in the Indian education system and being aware of the emphasis on permissions and authority of the faculty over the students, I appreciated this new kind of relationship between teachers and students. Here we were expected to learn as we wanted to.

● Juma, halaqa, and iftars – Did you know that Harvard has a full-time Imam and an Ustadha? I hadn’t known this until I started researching Harvard. Every Friday, in one of the large lecture halls we would have khutbahs followed by the jumaa prayer led by our Muslim chaplain Shaikh Khalil Abdur-Rashid. His wife Samia, the ustadha led a women’s halaqa every week through the academic year. We also had weekly Quran lessons by the Imam. This Ramadan, when I was away from family, I thought it was going to be lonely. To my pleasant surprise and joy, we had University sponsored Iftars every single night. The imam and ustadha led Iftars, followed by Taraweeh prayers every day attended by nearly 300 Muslims from the Harvard community. And at the end of Ramadan, we had multiple Eid festivities organised within Harvard.

● Students – In a university like Harvard, we have students from all around the world. I met people with very different cultures, languages, and religions. Through my friends, I was humbled to learn about different places and people including Uzbekistan, Albania, Chile, Spain, Algeria, Ecuador, Russia, Vietnam, Austria, and Poland. This has allowed me to be more empathetic and curious and understand various ways people have been influenced, helping me keep an open mind with new ideas that I was exposed to. It was also humbling that students were welcoming of each other and were here with a genuine intent to absorb as much as possible from others around them. I was never made the need to fit in. I could be my full self and express my thoughts without fear of judgement.
I have many people, organizations, and experiences to be grateful to for this opportunity. Human Welfare Foundation is one of the organisations that supported me in reaching here and I want to take this opportunity to thank the organisation and commend its work in developing India.