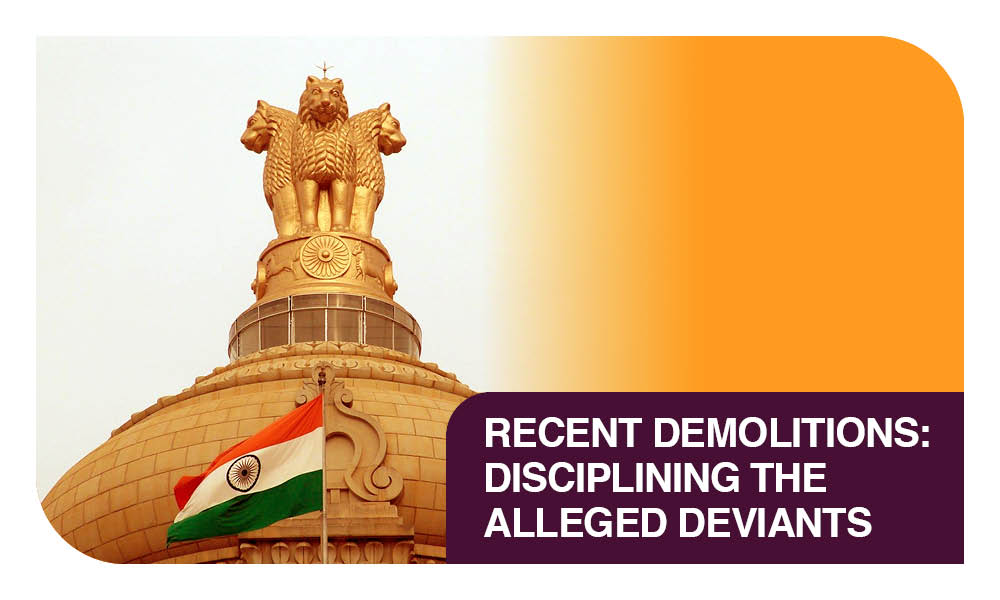 The test of law is in its effective implementation. Much has been said about human dignity being intrinsic to human life, the latest being the Puttaswamy case. However, the situation on the ground appears to be on a complete flip side.

In the recent past, a new trend has crept in. Demolition as the most accessible and immediate tool for state-sponsored collective punishment in absolute abuse and display of Orwellian State power. It is pointed out that the present illegal demolitions are a part of a series of similar demolitions that have been happening in our country such as those which were witnessed in District Khargaon of Madhya Pradesh, Jahangirpuri in Delhi and Allahabad, Kanpur, Saharanpur in Uttar Pradesh. In Jahangirpuri, a stay was granted by the Supreme Court and the demolition drive came to a halt mid-way. Albeit, the example had already been set with the outer portion of the area’s local Jama Masjid being demolished on the 20th of April, 2021. It is crucial to remember that this very Jama Masjid was the place where a mob tried to forcibly enter with saffron flags on Hanuman Jayanti on the 16th of the same month and which ended up in a communal scuffle. On top of this, assertions were made by the locals of the area that there have been targeted FIRs against the members of the Muslim community after the incident. However, this perhaps was not enough and a letter was written by the Delhi BJP Chief on 19.04.2022 to the Mayor, NDMC for “identification” of the “illegal constructions and encroachments” of “rioters” and to bulldoze “immediately”. On the very same day, a memorandum for carrying out an “encroachment removal action programme” was issued by the NDMC. It was the 20th of April early morning when the drive started which was later stayed. Interestingly, even after the issuance of such a stay by the Highest Court and the order being flashed as breaking news by almost all mainstream media houses and the same also being communicated to the authorities on the ground, the drive continued for at least a further 1.5 hours.

It is not a secret anymore that such recurrent demolitions have become the order of the day particularly as a state action for punishment in violation of local and municipal laws.