August 2022
Signs in the Heavens 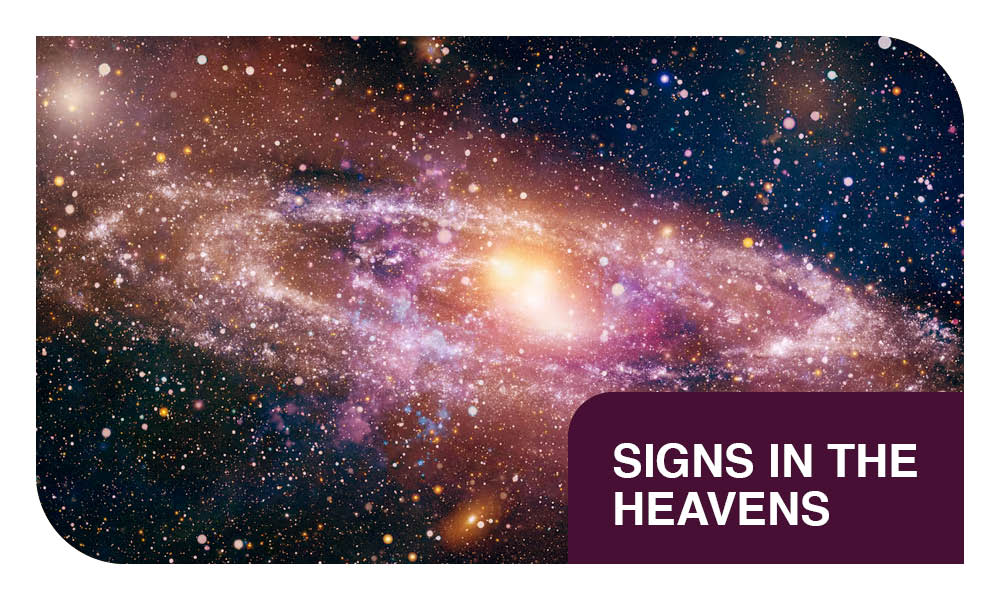 The first images from the James Webb Telescope were released by NASA to global excitement and celebration.
NASA, in collaboration with other space agencies ESA and CSA, launched the James Webb Space Telescope (JWST) on 25th December 2021. It is the largest and most advanced space telescope in history. Its purpose is to solve mysteries in our solar system, look beyond to distant worlds around other stars, and probe the mysterious structures and origins of our universe and our place in it. After 7 months, JWST delivered its first images.

Why are these images significant? According to NASA, these images are the deepest and sharpest infrared image of the distant universe so far. Webb’s First Deep Field is galaxy cluster SMACS 0723, and it is teeming with thousands of galaxies – including the faintest objects ever observed in the infrared. Every single dot in this image is a galaxy and the ones with spikes are stars. This image is approximately the size of a grain of sand held at arm’s length, a tiny sliver of the vast universe. It is only one tiny speck of the vast universe, showing distant galaxy clusters. Some of these galaxies are more than 13 billion years old and were created when the universe was in its infancy. The telescope looked 4.6 billion lightyears away to take this image which means this area in the universe is 4.6 billion years away from us- the same age as our solar system.
This landscape of “mountains” and “valleys” speckled with glittering stars is actually the edge of a nearby, young, star-forming region called NGC 3324 in the Carina Nebula. Captured in infrared light by NASA’s new James Webb Space Telescope, this image reveals for the first time previously invisible areas of star birth. Credits: NASA, ESA, CSA, and STScI
These images and the information provided by them about the formation of the first stars and galaxies and possible life on exoplanets – will be a revolutionary breakthrough in our knowledge of the universe we live in and open up possibilities previously thought impossible, like space travel. Human fascination with outer space Since the beginning of time, people across civilizations and cultures have been mesmerized by celestial objects; from the Greeks, to ancient India to the Chinese, to the Golden Age of Islamic Civilisation, Arabs, Persians, and Central Asians, to Europe to the space exploration of the modern world. It should be noted that the present incredible achievement of the JWST would not have been possible without the contributions of those who came before us.
The contribution of Muslim astronomers A 16th-century Turkish manuscript from the Book of The Kings shows Taqi al-Din and other astronomers with their sophisticated devices at the Istanbul Observatory. According to historical accounts, the Muslims were the first to study astronomy in the most scientific manner- through observatories and astronomical instruments like sextants, quadrants, astrolabes, armillary spheres, etc. And it was this research that laid the basis for modern astronomy. Some of the pioneers of this era and their notable contributions are as follows: ● Al-Battani – first notions of trigonometric ratios still used today ● Al-Biruni – stated that the Earth rotated around its own axis ● Al- Farghani – explained theory behind astrolabe ● Taqi al-Din – polymath, authored more than ninety books astronomy, clocks, engineering, mathematics, mechanics, optics and natural philosophy, coordinates of stars and eclipses, founder of Istanbul Observatory ● Ibn Shawka al-Baghdadi – Astrolabe ● Maryam al-Ijliya al- Astrulabi – Syrian woman astronomer, skilled astrolabe maker ● Al- Haytham – foundational work on modern optics ● And so many others. In an age where there is increasing erasure of Muslim history from schools and universities and general vilification of Islamic legacies, it is all the more important to remember that the incredible achievements in modern astronomy today would not have been possible without the contributions of Muslim scientists of the past.
What inspired these Muslim astronomers? Practical needs to determine times of daily prayers and observing the moon for knowing important dates in the Islamic calendar were the major driving factors. But most importantly, it was the repeated mentions of astronomical phenomena in the Holy Quran as one of the means of Divine Guidance.

Philosophical contemplations around JWST images
Social media was abuzz with memes and jokes, one oft-repeated phrase being “how small and meaningless are we?!…”. The images have elicited various philosophical inquiries about our existence as human beings, our place in this vast cosmos and purpose of life.
Consider what the Holy Quran says about these inquiries;

It properly signifies any apparent thing inseparable from a thing not equally apparent so that when one perceives the former, he perceives the other which he cannot perceive by itself. The natural phenomena are called Aayat – because they, as observable phenomena in the seen, tangible world, are indications towards phenomena in the unseen world/ the world yet to come i.e the Akhirah/the Hereafter/the Afterlife.

People of intellect. Those who have understanding. Those who reflect. Those who have wisdom. Allah has given each one of us a brain and the faculties of thinking, pondering and reflection. He has given us free will to use it in any way we want. Ulul Albab are the people who not only have the faculties of thought and reflection but are gifted in knowing how to put it to its correct use. It is referring to the intelligent and sound minds that contemplate about the true reality of things, unlike the ignorant who do not have sound comprehension.

They look at the Aayat and understand the purpose of life and creations. They introspect over and reflect upon the Aayaat. Allah SWT Has Created us humans, in order to examine- which of us is best in deeds.

“Indeed, We have made that which is on the earth adornment for it that We may test them [as to] which of them is best in deed.”(18:7) Life is a test to see who is righteous/God-conscious (taqwa) and who turns out disobedient to Allah SWT or rejects Allah SWT. Therefore in the Quran the purpose for mentioning science and to observe nature – is to make us do two things: 1. To Realise the purpose of life [“And I did not create the jinn and mankind except to worship Me. (51:56)] 2. To understand these phenomena in context of their relation with Akhirah [“Do they not contemplate within themselves? Allah has not created the heavens and the earth and what is between them except in truth and for a specified term. And indeed, many of the people, in [the matter of] the meeting with their Lord, are disbelievers.” (30:8)] Observing these wonders of the universe should lead us to the natural, logical and conclusive self-evident Truth of the Existence of The Omnipotent and Omniscient God. The One Who has Created everything with magnificent purpose and such intelligence of design, that it would go against every tenet of logic to deny His Existence. It would be the heights of willful ignorance to know about the existence of multiple worlds far beyond our reach or imagination and then continue to deny that this life is the only life that exists and to deny the inevitability of the Resurrection and Hereafter. Or to believe that such an All-Powerful God will not hold every human being accountable for their actions and recompense them with salvation or damnation accordingly. In a world increasingly plagued with existential crises, despair, despondency and nihilistic impulses, it is the need of the hour to ask such metaphysical questions about existence and purpose and to ponder and think deeply about them. Readers are encouraged to read the Holy Quran which offers serious and convincing solutions to aforementioned problems.
“We will show them Our signs in the horizons and within themselves until it becomes clear to them that it is the truth. But is it not sufficient concerning your Lord that He is, over all things, a Witness?” (41:53).