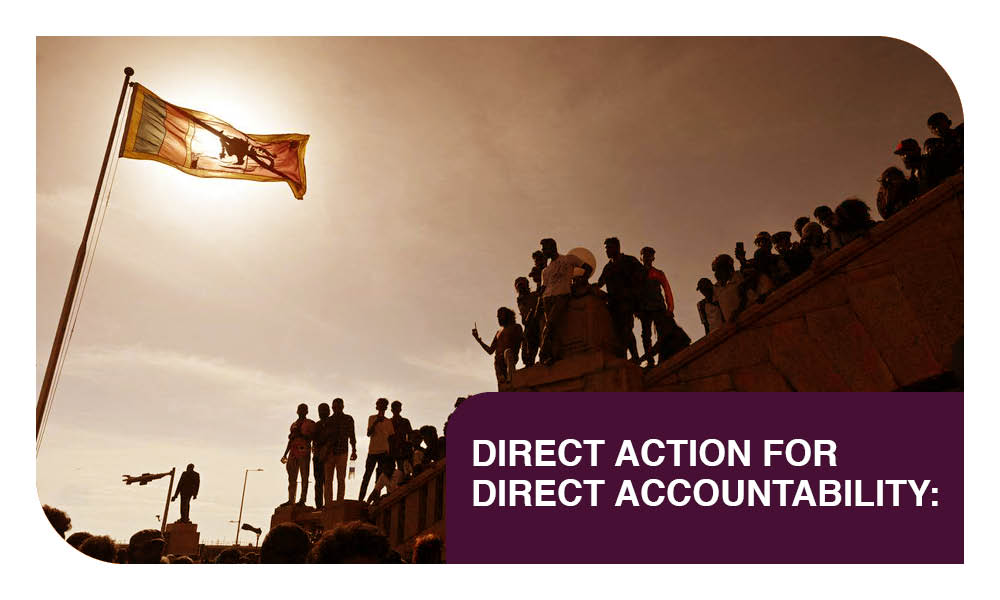 July has been a turbulent month for global politics. Between the overturning of Roe vs. Wade, the resignation of Sri Lankan President Gotabaya Rajapaksa and UK Prime Minister Boris Johnson, Russian ‘relocation’ of Slavic citizens, and the assassination of Shinzo Abe, news media organizations struggled with where to put the spotlight. A global descent into chaos seems almost inevitable when the nations with power are wracked with turmoil.

The French have long since been mocked for the amount of protesting they do. The stereotype of ‘strike like the French’ has become part of our daily vernacular. In accordance with all this, it doesn’t come as a surprise that its score on the Labor Rights Index 2020 is between 90.5 and 100. This, of course, is relevant only in the relation it has to the current climate of politics in Sri Lanka: Direct Action.

The comedic tableau in this last leg of Gotabaya Rajapaksa’s term may seem like it took place in a matter of days, but it is, rather, a steady progression of injustice that culminated in this. The economic crisis made global news. The Sri Lankan government using debt rollover strategy to live beyond their means has been an issue for too long. In more recent times, they have taken a page out of the Venezuelan government’s book and started printing more money, leading to depreciation of the currency value. However, the economic crisis in Sri Lanka is not the sole cause for the public’s agitation. Sri Lanka has a long history of ethno-nationalism, resulting in violence and hate crimes on one hand, and corruption and political instability on the other. In fact, the Islamophobic legislations passed by the Sri Lankan government seems awfully reminiscent of the situation in India.

It becomes relevant at this stage to also consider the political turmoil in the UK. While Larry the cat has taken the internet by a storm, inside 10 Downing Street, there was a different storm brewing. As the truth about Christopher Pincher’s predatory behavior came out, along with the information that Boris Johnson was made aware of the allegation before his appointment, the country went into chaos. What followed was a landslide of resignations from the cabinet, junior ministers etc. While it is naïve to assume that this occurred because every single person who resigned has very a strict moral code about sexual assault, this does not change the fact that the resignations of the ministers and subsequently Boris Johnson himself did happen. In fact, it is indicative of the attitudes of the public. Whether or not the politicians personally condemn Pincher’s actions, they knew that it would have an irreparable effect on their political credibility to be associated with Johnson in the wake of it. What this shows is not the integrity of the politicians, but the power of the public. The true meaning of ‘power to the people.’

Under BJP’s rule, India has experienced demonetization, a migrant worker exodus, politicians being accused of sexual assault, several separate cases of politicians watching pornography during political proceedings, numerous politicians openly using hate speech and calling for violence on minorities and an endless stream of lynching. Perhaps the economic crisis was not as severe as that in Sri Lanka, but it is non-negligible. Oil prices are at heights that no one expected, inflation is at an all-time high, the Indian rupee depreciating at an alarming rate. When looking at global politics today, in comparison to our nation’s politics, the question arises: what is the limit?

During the CAA and NRC protests of 2019 and early 2020, the country came together in a way most of us have never seen in our lifetime, and yet, with the onslaught of COVID, that, too, died down. The difference between the situation in Sri Lanka and India seems so startlingly clear. The amount of sway the public has on the careers of politicians in the UK and in India seems glaringly obvious. We talk about direct action in the face of injustice as a thing of the past, as though it is not something that we can do today. However, what happened in Sri Lanka is a testament to not only its continued existence but its efficiency.
In observing Indian politics there are many questions to be asked, but the one that stands out most is this: Where do we draw the line? When does one decide to take direct action?