August 2022
The Beauty of Charity 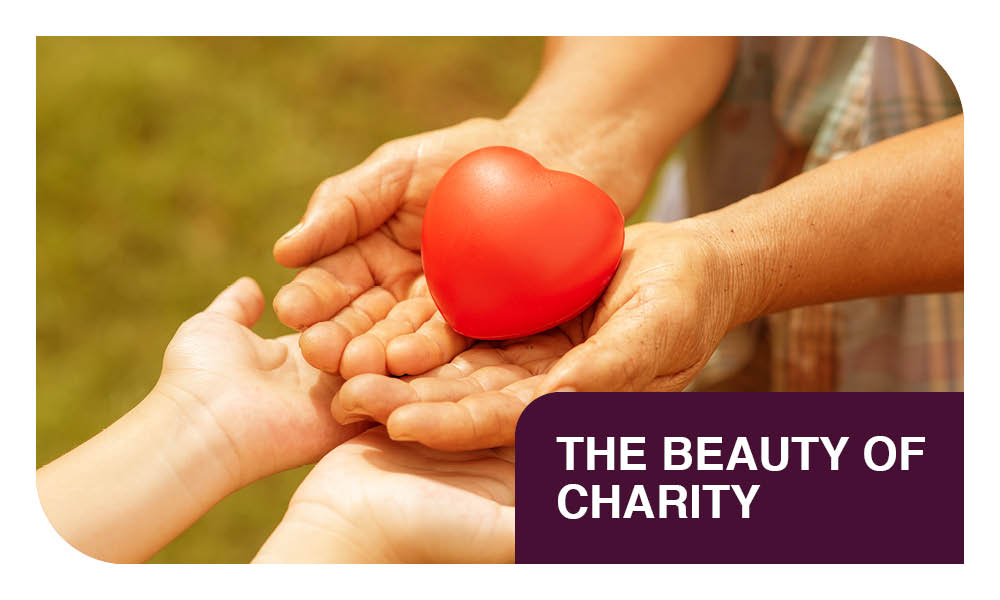 Translation by the students of Al Jamia Al Islamiya,Santhapuram 2018-24 batch
Finally, the millionaire realized how to live happily!

In a television interview, the interviewer asked the millionaire guest, “What does happiness mean in your life?”.He said,

“I went through four phases of my life in search of happiness until I found the true one. The first is the achieving of things. I felt that I’m achieving, and the acquisition of all that I wished for would bring me happiness. The second: attaining the most precious and expensive items. Still, I found the result to be temporary. The third: owning great ventures, such as owning a sports club or a tourist resort, but I was still unable to find happiness. The fourth: A friend of mine asked me to donate wheelchairs for a group of differently-abled children. I instantly contributed the necessary amount. Then he persuaded me (against my willingness) to go with him to present those gifts myself.

I reluctantly went with him and presented the gifts myself to the children and admired their faces filling with happiness as they received those chairs. They were riding on them everywhere playfully as if they were in an amusement park. However, what provoked true happiness in my soul is what took place when I was about to leave. One among the children came near me and pulled my leg towards him. I did not understand why. So, I made an effort to release him gently but he kept holding me and his eyes were completely focused on my face. I bent down to ask him, “Do you want anything else from me before I leave, my son?”.

His answer was the one that changed my whole life and after which I knew what true happiness was. He told, “I want to remember every detail of your face so that I can identify you when we meet up in heaven in front of Allah and can thank you once again.

” The events in our day-to-day life send us messages to remind us about the variety of things and the reality of life, and many people live in negligence of the definition of happiness and joy. They live in artificial

happiness and never try to figure out the meaning of true life or happiness until they face situations like these. It is only then, their hearts become alive, their consciences become alert, and their minds become conscious. They continue negligence in their life until they come across such situations and this is what the Qur’an described as “heedlessness.”

The Almighty said: “And many people are unaware of our verses.” This verse comes following the story of the preservation of Pharaoh’s body after being drowned in the sea, the Almighty said:

Today we will save you with your body, so that you may be an indication for those behind you, and many people are unaware of our signs.

The particular verse is a lesson that whatever a person experiences in his life, be it a situation or a word, watching something, reading a piece of information, or a calamity, disease or loss which afflicts him, are all messages from Allah for men to awake them from the negligence of life. And this millionaire, despite dedicating himself to many ideas that he felt would bring everlasting happiness, has only recently discovered that all those will just buy you temporary happiness and did not expect that one day he would find that true happiness can be attained by giving the same to others.

This is why God Almighty encourages charity so that the believer feels an everlasting sense of happiness. He, the Almighty said: As for him who gives and is pious and believes in goodness, We will make it easy for him), and our Noble Messenger, may God’s prayers and peace be upon him, was one of the most generous people, offered a lot of charity, and He says “God is generous and loves generosity.” The feeling of happiness comes to you when you give to others and it is wonderful to give to someone who asks you what he needs, but the most blessed entity is to give to someone who is in need before he addresses the issue. This was the experience of the millionaire about his happiness. And it is said that “Ask the experienced one and not the wise one!”.