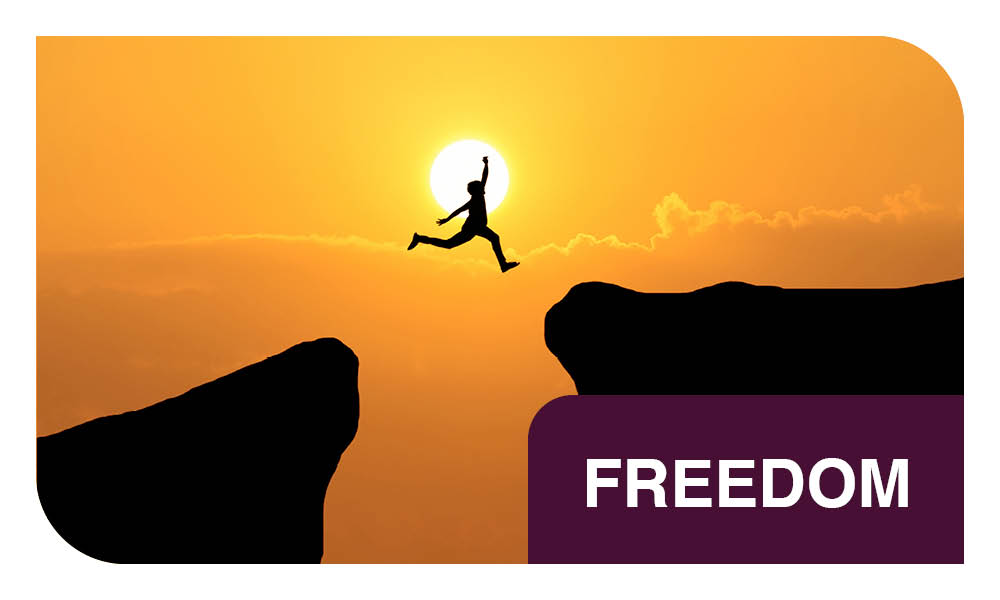 Category : Explainer Series
Author : Aura Editorial Desk
. An animal is bound by the laws of nature whereas a human being, although constrained by physiological laws, has a free moral choice and can do good or evil.
American artist Norman Rockwell made a series of four oil paintings in 1943 called ‘The Four Freedoms’. The paintings were named Freedom of Speech, Freedom of Worship, Freedom from Want, and Freedom from Fear. The paintings were inspired by the 1941 State of the Union speech by the-then American President, Franklin D Roosevelt in which he pointed out these fundamental human rights that must be universally protected. It is said that these freedoms were integrated into the Atlantic Charter and they later became part of the United Nations Charter. For most Indians, the word freedom is associated with the freedom struggle waged to gain independence from British rule. Those who fought against colonial rule were called freedom fighters. The word ‘Azadi’ (freedom) is etched in our memory through its depiction in prose, poetry, films and slogans on the theme of India’s independence. Freedom has a strong association with personal liberty and autonomy. Since the 18th century, freedom of the individual acquired extraordinary importance in Europe. However, the Europeans did not walk the talk and this concept applied only within their borders and not to other countries, which they conquered and subjugated. Freedom is considered an antonym of slavery. A slave submits himself/herself to the will of his/her master. In a certain sense, addiction is also a kind of slavery where the person loses control over his/her will and is controlled by an internal impulse or craving. Sometimes, freedom also implies the allowance to make choices and decisions. Freedom is the distinguishing factor between a human being and an animal. An animal is bound by the laws of nature whereas a human being, although constrained by physiological laws, has a free moral choice and can do good or evil. Some who do not believe in God or religion say that the belief in an omniscient God implies that He controls the future because He either wills it or knows about it. This notion of predestination means everything is pre-decided and so human freedom is an illusion and all choices and decisions are an outcome of specific physical laws and chemical reactions. Another debated aspect about freedom is whether it should be absolute or subject to certain restraints and come with responsibilities. The theory of the social contract comes into play here. Let us try to understand some key terms and concepts related to freedom.
Freedom of speech: is a principle that defends the freedom of an individual or a community to express their opinions and ideas without fear of reprisal, censorship and legal action. The right to freedom of expression is recognized as a human right in the Universal Declaration of Human Rights and international human rights law by the United Nations. Many countries protect the right to free speech through laws that are part of their constitution. Terms like free speech, freedom of speech, and freedom of expression carry the same meaning in political discourse.
Freedom of worship: is a principle that supports the freedom of an individual or a community, in public or private to manifest religion or belief in teaching, practice, worship, and observance. It also includes the freedom to change one’s religion or beliefs, the right not to profess any religion or belief or not to practice a religion. Freedom of religion is recognized as a fundamental human right in most countries. In a country with a state religion, freedom of religion implies that the government permits religious practices of other sects besides the state religion, and does not persecute believers in other faiths (or those who have no faith).

Freedom of belief: allows people to believe in religion but not necessarily the right to practice the religion or belief openly and outwardly in public, a sine qua non of religious freedom. The term belief includes all forms of irreligion, including atheism and humanism.

Freedom from want: is a principle that is closely intertwined with the concept of right to food and right to livelihood. The right to food, and its variations, is a human right protecting the right of people to feed themselves in dignity, implying that sufficient food is available, that people have the means to access it, and that it adequately meets the individual’s dietary needs. The right to food protects the right of all human beings to be free from hunger, food insecurity and malnutrition.

Freedom from fear: means that no one should be in fear of anyone else when it comes to the question of his or her political beliefs, organizational affiliation or social and religious activities. They should have a feeling of security and not be threatened by people who take the law in their hands and dispossess others of their wealth or dignity.

Freedom of assembly: sometimes used interchangeably with the freedom of association, is the individual right or ability of people to come together and collectively express, promote, pursue, and defend their collective or shared ideas. The right to freedom of association is recognized as a human right, a political right and a civil liberty. Freedom of assembly is often used in the context of the right to protest, while freedom of association is used in the context of labor rights.
Freedom of choice: describes freedom to perform an action unconstrained by external pressure. For example, in the abortion debate, the term “freedom of choice” implies a woman’s right to decide to proceed with or terminate a pregnancy. Similarly, other issues like euthanasia, vaccination, contraception etc. are debated under “freedom of choice.”
Freedom to bear arms: means the right to keep weapons (arms) for protecting one’s life, liberty, and property.
Freedom of movement: is the right to travel from one place to another within the territory of a country, and the right to leave the country and return to it. The right includes not only the right to visit different places but also changing the place of residence or business.
Freedom of thought: is also called freedom of conscience or ideas. It is the freedom of an individual to hold or consider a fact, viewpoint, or thought, independent of others’ viewpoints. Freedom of thought is the forerunner and predecessor of and thus is closely linked to other liberties, including freedom of religion, freedom of speech, and freedom of expression.
Freedom of press: Also known as, “media freedom” is the fundamental principle that communication and expression through various media, including printed and electronic media, especially published materials, must be recognized as a right to be exercised freely. There should not be any interference or censorship by the government or its agencies to influence the way events and policies are reported.
Artistic freedom: Or freedom of artistic expression is the freedom to imagine, create and distribute diverse cultural expressions free of governmental censorship, political interference or the pressures of non-state actors.
Internet freedom: is a general term that includes digital rights, freedom of information, the right to Internet access, freedom from Internet censorship, and net neutrality.
Civil liberties: are guarantees and freedoms that governments commit not to curtail by constitution, legislation, or judicial interpretation. Civil liberties include most of the freedoms described above.
The first amendment: is part of the United States Constitution that prevents the government from making laws that regulate an establishment of religion, or that prohibit the free exercise of religion, or abridge the freedom of speech, the freedom of the press, the freedom of assembly, or the right to petition the government for redress of grievances.
Free trade: Free trade is a trade policy that does not restrict imports or exports. It can also be understood as the free market idea applied to international trade.
Laissez Faire: is the policy of leaving things to take their own course, without interfering. It is an economic system wherein the government does not interfere in the workings of the free market.
Censorship: is the suppression of speech, public communication, or other information. The reasons for censorship may include curtailing objectionable, harmful, sensitive, or inconvenient information and is mostly done by the government and other controlling bodies authorities.
The Social Contract: is an implicit agreement among the members of a society to cooperate for social benefits, for example by sacrificing some individual freedom for state protection.
Fate in Islam: implies that Allah has predetermined everything in our lives and has power over all things. However, this does not mean that Allah has made all of our choices for us beforehand, nor does it imply that He forces us to make mistakes and will punish us for them. Allah says in the Quran that: “This is the truth from your Lord. Whoever wills let them believe, and whoever wills let them disbelieve.” It means that guidance and freedom of choice is available to every human being. It is his/her free will to choose good or evil.
Islamic concept of freedom and slavery:Islam means submission to the will of God. We along with all of God’s creation are His humble slaves and it is our duty to obey our Creator, Master and Sustainer of the universe. Is this a restriction on our freedom? If you look at life, you will realize that absolute freedom without any regulation is anarchy and leads to disaster. The only debate can be around which regulation is the correct one to adhere to. Islam claims that its guidance is divine and not man-made. It gives almost unlimited freedom to humankind to pursue their dreams and aspirations. A few restrictions that Islam imposes are only to protect us from evil consequences.