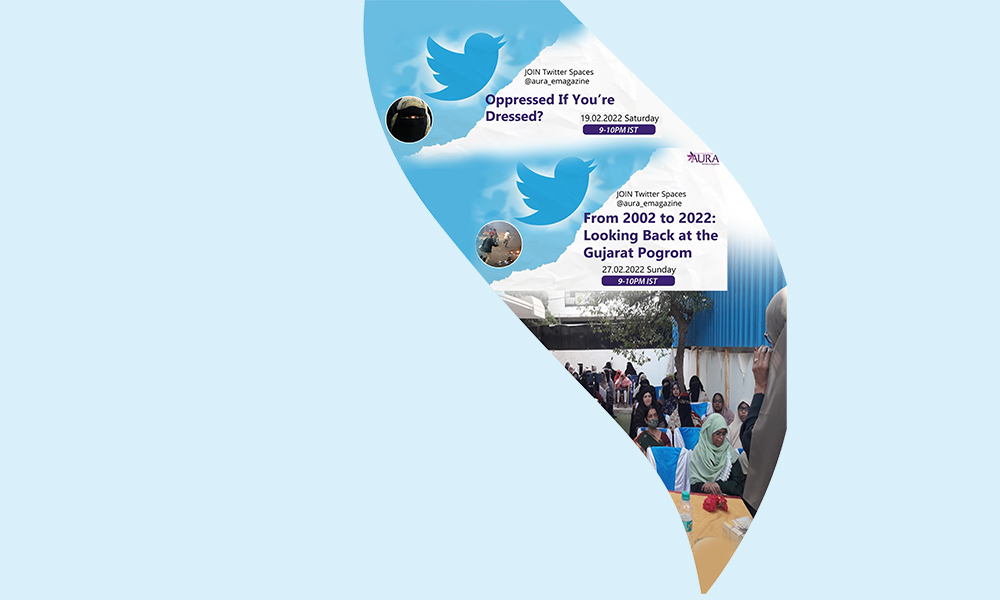 were organized starting 15th February 2022, with the topic ‘Is Love Too Costly to Go on a Discount Sale?’ Other topics that followed were ‘Oppressed if You’re Dressed?”, discussing the hijab ban; ‘Elections and Women’, ‘Motherhood vs Career?’ ‘Maintaining Mental Health’, ‘20 Years of the Gujarat Pogrom’ with eminent activists and leaders from Gujarat, and ‘Education: From Darkness to Light’, which received an overwhelming response from listeners. Every night from 15th to the 28th of February, listeners tuned in for healthy and interesting discussions on various topics – including Right to Privacy in the Quran, Lessons from the Life of Prophet Muhammad (saw), Women and Media, Environmental Concerns, Budget 2022-23 and the Girl Child in India.

February 2022, an online program hosted by the Aura Readers Club gathered together many dedicated readers of Aura who gave their valuable feedback and comments to the Aura Team, on many aspects including layout, content, design and social media publicity. Some major speakers who attended were PK Abdul Ghafour, Former Senior Journalist, Arab News, Dr Nooshin Moosa, Dentist & Writer; Zakia Khan, Journalist and Dr Shahnaz Begum, Professor. The Presidential Address was delivered by Rahamathunnissa A, Chief Editor, Aura e Magazine, and the Welcome Address was delivered by Juveria Farheen, Convenor, Readers Club. The value of reading as well as the need to publish critical young voices was emphasized. The guests appreciated Aura’s attempts to publish a diversity of voices as well as the layout and design.

Many programs were held offline in cities such as Hyderabad, Kozhikode, Patna and others where readers and dignitaries gathered to discuss various aspects of Aura. In addition, subscription drives were carried out resulting in many new subscribers and readers. Explanatory online programs to help people subscribe and submit to Aura were also held.


An online meeting exclusively for Aura’s Contributors was organized on the 26th of February, 2022, with a keynote address by Professor Ghazala Jamil, JNU, followed by comments from distinguished contributors of Aura such as Aishath Muneeza, Maldives; Dr Shahnaz Begum, Darbhanga, Dr. Nooshin Moosa, Kerala, etc. The Meet also had some poetry performances by our young contributors. The contributors offered their critical comments on how to improve the layout, design, content and publicity.

An online meeting exclusively for Aura’s Contributors was organized on the 26th of February, 2022, with a keynote address by Professor Ghazala Jamil, JNU, followed by comments from distinguished contributors of Aura such as Aishath Muneeza, Maldives; Dr Shahnaz Begum, Darbhanga, Dr. Nooshin Moosa, Kerala, etc. The Meet also had some poetry performances by our young contributors. The contributors offered their critical comments on how to improve the layout, design, content and publicity.


The grand concluding program was held on 2nd March, 2022, which marked exactly one year of Aura. Ayesha Sultana, the Editor offered introductory remarks. Syed Sadatullah Hussaini, President, Jamaat e Islami Hind offered the keynote address and that was followed by a panel discussion with Kavita Srivastava, Dr Sylvia Karpagam, and Khyser Anjum on the topic “Beyond Equality: Towards the Liberation of All Women.” This was followed by a performance and poetry segment with Mafazah Sharafuddin, Husna Munawwarah, Malik Ishrat, Ayesha Natasha Shafik and Hiba Farook. The concluding address was delivered by the Chief Editor, Rahamathunnissa A. The program was anchored by Saima Sabreen and the panel moderated by Shayma S, the Sub Editor of the magazine.

Aura Readers’ Club is an initiative of Aura e Magazine to create a forum where critical discussions about the monthly issues of Aura can take place. By way of this review system, discussants can get together to talk about important issues and debates. Every month, one Aura Readers’ Club meeting is organized to go through the current issue of Aura. On 10th March, Aura Readers’ Club, Kerala, organized a Review Meeting to discuss articles from Aura’s March issue, including the cover story on equality, articles on environment and law, and the speakers selected some of their favourite articles from previous issues as well to present before the house.

The speakers included Sheeba Ramachandran, Writer & Mahila Congress State Secretary; Dr Sulfiya Samad, Asst Professor, TKM College of Arts and Science; Thasneem A, Manager, National College for Teacher Education; K. Bindu, English Teacher, Dr Zareena Jasmine, PhD Scholar and MD; Adv M Shajna, Central Government Counsel and Lawyer, Kerala HC; Nadhiya Rijas, Educational Therapist and Mehnaz Ashfaque, State President, WINGS.
Moderated by Lulu Mujeeb Rahman, the program was lively, with many other aspects of Aura including the design and layout being highly appreciated. One speaker even mentioned how she found an article useful to teach in her class, while others commented on the attention to detail given by some authors. Rahmathunnissa A, Chief Editor Aura e Magazine offered the concluding address, touching upon the various aspects brought up by the reviewers and her own experience putting together the issue.

The format of Aura Readers’ Club itself was also appreciated by the discussants as a form of feedback mechanism, which is often lacking in publications. Aura hopes to be a reference on many important social and political issues for not just women but all of society. The critique and comments from Readers only adds to this hope.