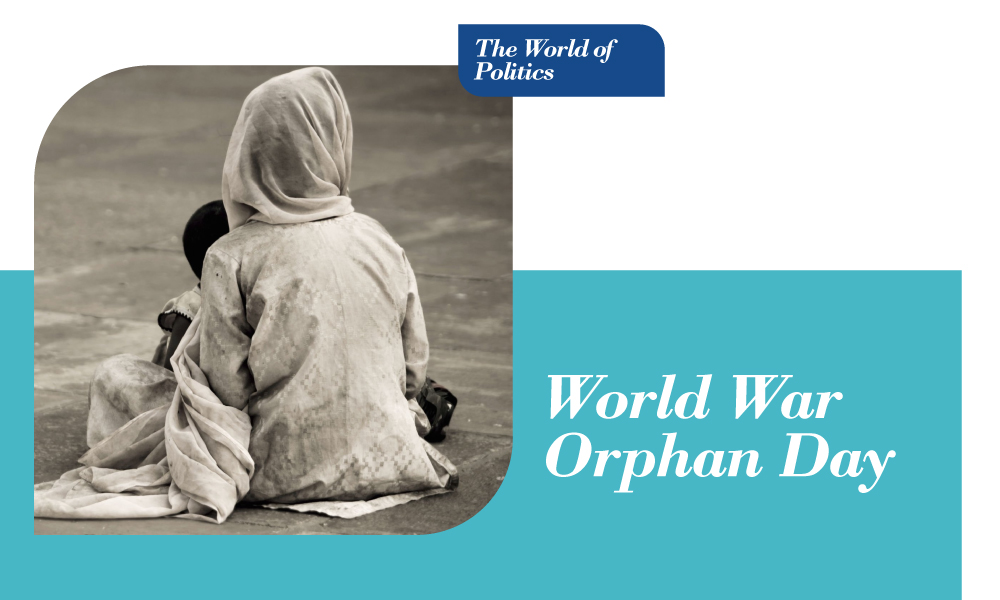 Category : THE WORLD OF POLITICS
Author : Zenith Khan
The United Nations International Children’s Emergency Fund estimates that approximately 150 million children worldwide are orphans, and many of them are so due to deaths caused by war. From a very young age, these kids undergo physical and psychological trauma. At the war sites, many of them were first-hand witnesses to the brutal deaths of their family members.

The plight of a child who lost a parent can’t be confined to a single day but when war becomes familiar, the suffering of the oppressed takes a backseat. The world which lives in a protective bubble away from the noises of bombs and guns does need a reminder that the Earth is not a safe haven for many. According to UNICEF, nearly a quarter of the world’s children live in conflict or disaster-stricken countries.

The repeated display of war crimes has made us desensitized and limited our response to mere words of condolences. The refugee camps are increasing every year; in it reside a number of children below the age of 18 who lost their parents in armed conflicts between States and non-state groups. The United Nations International Children’s Emergency Fund estimates that approximately 150 million children worldwide are orphans, and many of them are so due to deaths caused by war. From a very young age, these kids undergo physical and psychological trauma. At the war sites, many of them were first-hand witnesses to the brutal deaths of their family members. Post-traumatic syndromes are common among orphans because they lack emotional support to overcome their past. Many kids suffered disabilities due to missile attacks or while saving their brothers and sisters. Statistics show that 1 in 6 children in the world are affected by armed conflict.

Africa and the Middle East are the most significant contributors to the list of war orphans. The recent war between Ukraine and Russia has also added to the numbers. Syria and Yemen are among the countries which have been caught up in armed conflict for more than a decade. The question here is, what happens with these kids after they are orphaned? The Middle East has a predominantly Muslim population and so do many countries in Africa. This makes Muslim children a major percentage of war orphans. Yet, the community has done very little to help in the adoption and safe rehabilitation of these kids. The excuse that Muslims have long cited across the globe even in rich-income countries is a religious restriction on the adoption of a child. During National Adoption Week in October 2019, it was observed that 90% of Muslim children adopted in the UK are placed with non-Muslim families. Placing them with families in a safe home is much better than the refugee camps but in the long run, it can create an identity crisis, particularly among those who were slightly older during their adoption and remember their roots.

What we forget is the other option that is not only a moral but also a legal obligation as per the Quran, which is fostering an orphaned or abandoned child. The Qur’an emphasizes the preservation of a child’s lineage and identity. The term Guardianship (or Kafalah) for this purpose is used (33:4-5). It is high time that there is action-based work rather than mere critique. As a community, not only can Muslims financially aid every orphan child, irrespective of their religion or background, but also create a safe foster system. This day should be used to correct the problem of the present for a better world for these kids.

This is not a problem that can be solved by the government alone; even though they may be responsible for wars, it is a problem that needs a global response. Stopping wars for these children is indeed a common responsibility but wars don’t come to end in a day and their repercussions are passed on like a legacy to coming generations. There is an immediate need to provide a safe place for these kids. It is commanded by the Prophet (SAW) “Whoever among you sees evil, let him change it with his hand, if he is unable to do so, then with his tongue, if he is unable to do so, then with his heart, and that is the weakest level of faith.” If we don’t come out of our bubbles, we will lose the future of these kids to trauma; abuse; drugs etc. and these will be the atrocities that we would inflict on these orphans without using a single gun just because we were too self-observed to care about the oppressed.