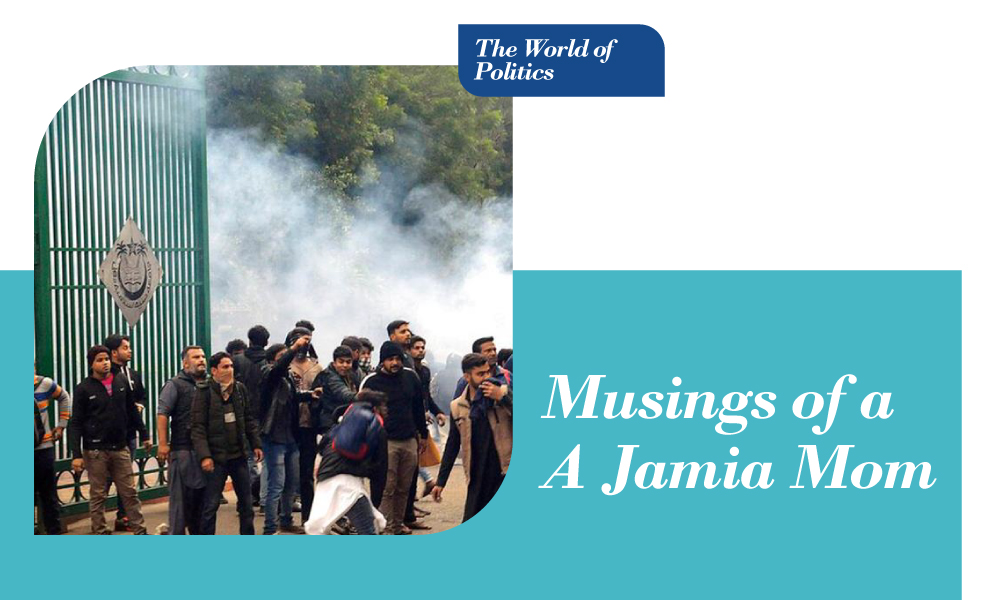 Category : THE WORLD OF POLITICS
Author : Ayesha Subhan
Marking three years of the anti-CAA-NRC movement,
the musings of a concerned mother.
‘For Each Age,
Is A Dream That Is Dying And
One That Is Coming To Birth.’

The daughter, who left home in pursuit of a law degree, but who along with her peers, has ended up as a pariah for the law enforcement forces.

Who couldn’t quit thumbsucking, till her mid-teens, but now raises her fist in defiant rebellion.
There was a time when I would worry if she was ill or had skipped meals.

There was a time when I would enquire about her whereabouts and relax, knowing she was in the campus, library, cafeteria, hostel.

Now, when she tells me, she is at the Jamia barricades or at the Holy Family Hospital with an injured friend, I presume, it’s just another day in her University life.

Baton charged, tear gassed, pushed, pawed, grabbed, scratched, pinched, detained, threatened, abused in the most racist, vulgar language is all a new normal for her.
A part and parcel of her daily routine.

There was a time, when I felt she wasn’t abreast of the political developments on the global and national arena.
Now, she is an ingredient in the boiling, seething cauldron of a revolution that refuses to fizzle out.

The footage from The Old Reading Hall, at Jamia brought many reactions.

There are some who gasp, aghast at the sheer brutality as a collective conscience is pricked.But there are others, the accusatory media houses, doing their shrill name-calling and claiming it to be a deserving punishment.
As blows are rained on hapless students, the ruling state and its rabid Rottweilers gloat with glee.

These anti-nationals and terrorist sympathisers, need to be crushed and shown their place in the social milieu.

But few offer sympathy. They are branded as violent members of “The Tukde-Tukde Gang”, by the Bigot Brigade – Sudhir Chaudhary, Deepak Chaurasia and the High-Decibel Goswami. Rubbing salt and pouring lye on their festering wounds.
What if Minhaj had been Manoj, Mustafa had been Murari and Mujeeb had been Mohnish?
Would they still elicit the same disturbing, mind-numbing, bone-chilling apathy?
Scores of students suffered injuries in the excessive and unnecessary clampdown by the Police and the CRPF.

“Broken in body, but not in spirit.
And therein lies their beauty.”

When they continue in defiance and refuse to cow down.
‘When The Going Gets Tough, The Tough Get Going.’
‘Aazadi Shahaadat Maangti Hai.
Inn Bachchon Ney Shahaadat Di Hai.’
Their Innocence, their dreams and their trust, all sacrificed and martyred at the altar of skewed governance.
When those who are meant to uphold Law and Order, blatantly violate all norms, but the victims still lodge their complaints with the very same perpetrators and expect Justice, then perhaps, they are still willing to piece together their shattered ideals.
‘For Each Age, Is A Dream That Is Dying And One That Is Coming To Birth.’
Only those, who brave the currents and swim the dark oceans, can fathom the depth of its murky waters.
This is the litmus test for the present generation.
How they deal with the Fascist State, the social turmoil, their youthful angst and anguish and whether they are able to channel their bravado and energy in the right direction at the right time.

Joining a few protest marches and changing the status and DP of my Whatsapp Account is all I have done as an expression of solidarity.
Have I failed the Youth, my Community, my Homeland, my Daughter?
Will History be kind to me, to us all?
Will History still be recorded by the pen of the victor?
There are valuable life skills and lessons being learnt at the barricades.
There is still a glimmer of hope.
Faith in the Judiciary and Constitution inspires them to rise afresh and march ahead.
It is so easy to pronounce the innocent as guilty and so very tough for the blamed to prove their innocence.

True Justice can and will prevail in the court of the Most Supreme Authority, on the Day of the Final Judgment.
To Him is our appeal and He hears and sees all.

Dr. Ayesha Subhan
(Dedicated to my daughter)
Circa 14th December 2019