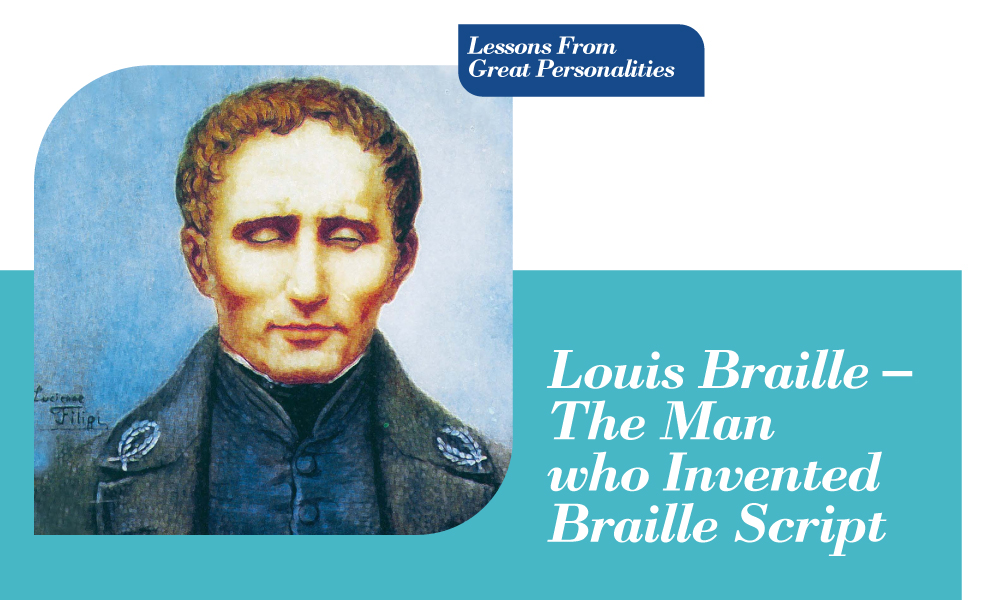 Category : Lessons from Great Personalities
Author : Naeema Fasal
As Jin Fiebig quotes,
“ There is a wonder in reading Braille that the sighted will never know:
to touch words and have them touch you back. ”

As Jin Fiebig quotes, “There is a wonder in reading Braille that the sighted will never know: to touch words and have them touch you back.”The 4th of January is World Braille Day, an international celebration honouring the importance of Braille as a means of communication in fully realising human rights for blind and visually impaired people.

Blind people are just like people seeing in the dark. The loss of sight does not impair the qualities of the mind and heart. History records the most prominent figure whose talents and deeds left a lasting impression on us – Louis Braille – the mastermind of Braille Script. At the age of 3, he accidentally blinded himself in one eye while being in his father’s workshop which led to the loss of the other due to inflammation.A young lad of 15 years, he invented a universal system to help the impaired.

Additionally, being a talented and passionate musician himself, he contributed to the creation of Braille codification as well.

Braille’s system was based on the military code called “Night Writing” invented by captain Charles Barbier which was embossed with dots and dashes that fellow soldiers could read safely with their fingers on the battlefield at night. Louis Braille simplified this system for easier use such that they were the ideal size for a fingertip to feel with one touch. The irony behind the masterpiece is that he created this system with the same tool, the awl – the sharp tool that had caused his blindness.

Braille is not a language, it’s a system of writing, which means it can be adapted to different languages. The areas where this invention scored were the scientific, algebraic, practical, and medical levels. Unfortunately, the medical institutes and establishments were rather conservative and thus this great innovation was slow to be adopted.

As the curtains fell, it was time for Louis to depart. He died of tuberculosis at the age of 43, two years before his invention finally rose to the ranks and was well-recognized and appreciated around the world. This system has proven to be revolutionary for many blind and disabled who once had to hide under the veil of darkness. In honour of his great work and achievements, a second eponym was gifted to this extraordinary man in 1999, when a rare type of asteroid was christened ‘9969 Braille’ by NASA.

It was a timeless tribute to a great human being. When the world around the impaired hovered in darkness, this man’s invention became their guiding warrior. If braille hadn’t existed, the talents and possibilities of Helen Keller, James Joyce, Ray Charles, and John Milton might as well have been snuffed out. Remember that the thing worse than being blind is to have sight but no vision. So envision for the heart and the mind shall guide you through.