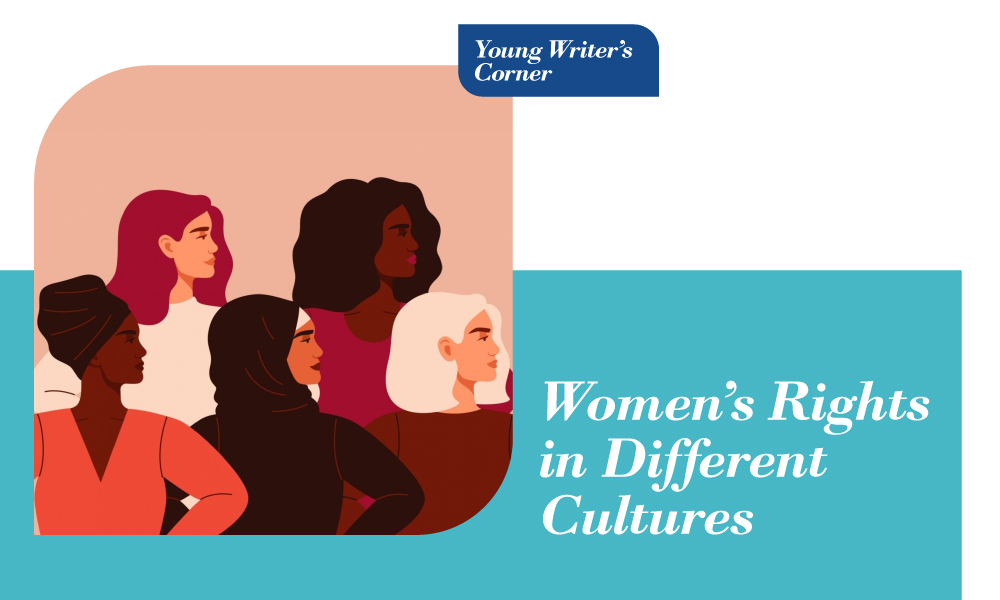 Category : Young Writers’ Corner
Author : Hani Irshad Nawab
Islam has granted women the right to equality in humanity, after they were persecuted and despised in the days of ignorance, and they viewed her as a body without honoured feelings or dignity, as the Almighty said in his noble verses: (O people, fear your Lord who created you from one soul. and from it He created its mate and dispersed from both of them many men and women). (Qur’an – 4:1)
Women occupy an important position in society. They play an active role in its progress and success, in addition to their primary role in raising their children, refining their personalities, and instilling positive principles within them to be successful people in their society. For this reason, Islam honoured women and granted them many rights in life. In the following article, I will shed light on this important topic, and we will talk in detail about the status of women in Islam, their rights, and their fundamental role.
Defining women’s rights:

The concept of women’s rights denotes the rights and freedoms granted to women and girls of different ages in the modern world, which can be ignored by some legislation and laws in some countries, and to achieve this many institutions and movements were formed by women and even men in many countries.

Women’s rights are defined as the things and rights that must be provided to women, such as their right to freedom, dignity and equality, and all this from a humanitarian standpoint, away from fear and exploitation, because these rights are considered within international and national human rights laws, which all contribute to enhancing women’s care and protection from exploitation and violence.
But, unfortunately, many women in the world are subjected to violations of their rights, the most common of which are:
1-Women’s failure to obtain their right to land, property and housing.

3-Women are exposed to the phenomenon of violence, where the proportion of abused women in the world is about 30%, whether physical or sexual violence.

An overview of women across civilizations:

The woman in the Greek civilization was despised and humiliated, and they called her an abomination from the work of the devil, and she was used as goods and sold and bought in the markets, and her rights were robbed and she was deprived of her right to inherit, and the right to dispose of money, as the Greek philosophers said about her, that she is an imperfect human being. Nature left her at the bottom of the ladder of creation. As for the Greek philosopher Socrates, he said that the presence of women is the greatest source and source of crisis in the world and that women are like a poisoned tree, where their appearance is beautiful, but when the birds eat them, they die immediately.

As for the Roman civilization, women were considered a man’s belongings, and a cheap commodity that he disposes of as he pleases and desires, and the woman was considered at the time as an evil that must be avoided, and that she was created for pleasure only, and the husband had the right of the woman’s life and the right of her death, and in her youth, The father was the one who chose her husband for her, and the subject of divorce among the Romans was like drinking water, where the woman is divorced dozens of times as if she were a worthless insect.

In ancient England, women were sold in the markets at the cheapest prices, because they burdened the church that sheltered them, and remained until 1882 deprived of their right to own real estate and the freedom to barter. In Belgrade, women were sold by the scale, and one pound was equal to three pence.

As for the Jews, women were sold to them as a cheap and despicable commodity and moved between the arms of men in a very perverted manner, and they viewed women as treacherous, rebellious, liars, and humiliated, and they considered her a curse because she seduced Adam, peace be upon him.

The Arabs in the days of ignorance looked at women as enjoyment from the belongings they owned such as money, livestock and land, and they disposed of them as they wished, as they deprived them of the inheritance, as they worked according to a slogan that only those who carry the sword inherit from us, and women were a source of shame for all Arabs, and at the time Female infanticide was very common.

How did Islam honor women?

Islam has honoured the woman being a mother, where the Almighty said in his generous verses: “We have enjoined man to be kind to his parents. In pain did his mother bear him and in pain did she give birth to him. The carrying of the child to his weaning is a period of thirty months.” (Qur’an – 46:15

Islam has made women equal to men in destiny and status, and the man is not greater than the woman, neither in status nor in value, as the Holy Prophet Muhammad(PBUH) said in his honourable hadith: “Women are the sisters of men”.

Islam has excused women from mandatory congregational prayer as a mercy to them.
Islam has imposed a severe punishment on those who defame a woman for her honour. The punishment prescribed for this is flogging eighty lashes on the accuser, and his testimony will never be accepted thereafter.

Islam honoured women by giving them the right to demand a divorce from their husbands when the relationship becomes too difficult to be carried on, and the husband refuses to divorce her.

Islam has honoured women with the right of inheritance from her husband, father, mother, son and brother, while she is not obligated to spend on any of them.

The religion of Islam has given women the right to legal dowry in the event of a marriage, and prohibited the husband or family from taking anything from it.

The Islamic religion commands the husband to lead a good life with his wife and to respect her even after divorce, as the Almighty said in his noble verses:

(And live with them kindly, for if you dislike them, perhaps you will dislike a thing and God will make good in it).

Islam has granted women the right to equality in humanity, after they were persecuted and despised in the days of ignorance, and they viewed her as a body without honoured feelings or dignity, as the Almighty said in his noble verses: (O people, fear your Lord who created you from one soul. He created her from its mate and dispersed from both of them many men and women.

Islam grants women the right to contract and establish agreements, whether it is in sale, purchase, business management, trade, as well as in the marriage contract, which is a very important point for a woman’s life.

Islam granted women the right to education, and to acquire knowledge after they were deprived of this in the days of ignorance, while knowledge was the right of men only.

Islam grants women the right to inherit, and this is what is mentioned in many noble verses.

Islam has given the woman her natural right to marry, and to choose the husband that she is comfortable with and suits her, and if she does not consent, then the marriage is considered void, so the judge must ask the woman for her consent before contracting the marriage, and this is one of the conditions of a valid marriage in religion and Islamic law.

Islam grants the woman the right to dispose of her money in the manner that suits her, so her husband, brother, or parents have no right to restrain her or prevent her from disposing of it freely.

The role of women in building an Islamic society: