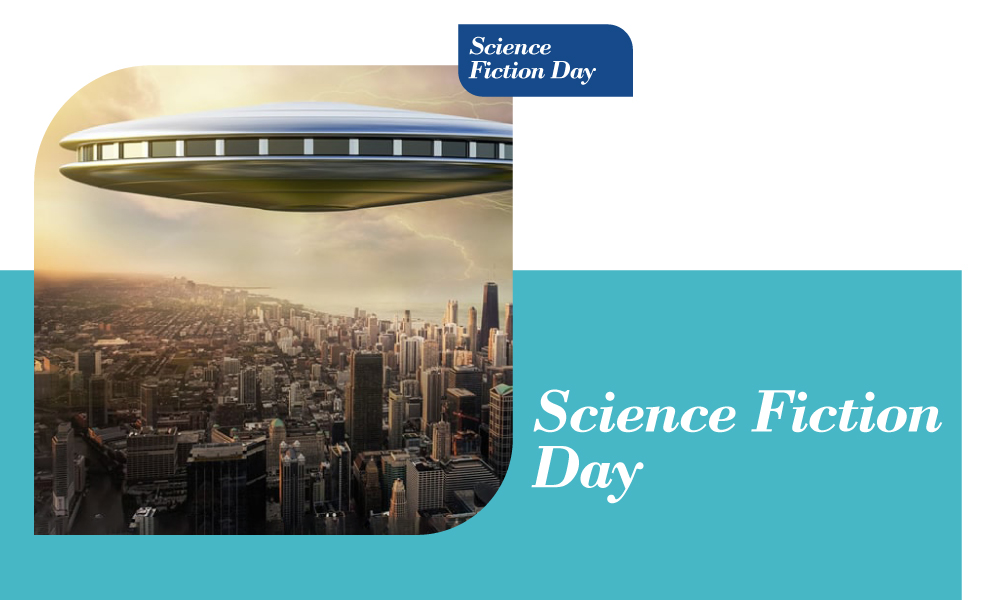 Category : Science Fiction Day
Author : Firasha Shaikh
Science Fiction Day is marked on the 2nd of January which happens to be the birthdate of celebrated sci-fi author Issac Asimov best known for the Foundation series.

Recently, there has been a resurging interest in science fiction in popular culture (commonly referred to as “sci-fi”). Its enduring appeal throughout the ages has only been growing. This makes sense, as the more we enter into the future, the more we’re able to appreciate its relevance as the core themes of sci-fi seem to become more and more our reality rather than remaining in the realm of imagination.

Science Fiction Day is marked on the 2nd of January which happens to be the birthdate of celebrated sci-fi author Issac Asimov best known for the Foundation series.

The sci-fi genre is not a contemporary one by any means.

Frankenstein, the novel written by Mary Shelley and published in 1818, is considered as the work that was one of the pioneers of the genre. The themes touched upon in the novel are remarkably relevant; a cautionary tale against not just pseudoscience but against scientists who abandon their social responsibilities and the unintended, yet devastating consequences of interfering with the order of nature.

As a genre, its origins are pinpointed during the era of the Cold War when concerns over militarization, the future of humanity, technological development, etc. were on the rise.

Sci-fi’s allure is often attributed to its creative world-building, innovative plotlines and compelling storytelling. Sci-fi media touches upon a vast array of recurring themes including but not limited to: human fears, alternate realities, futurism, technology, environmentalism, philosophy, religion, politics, and much more.

Sci-fi as a cautionary tale/ commentary on trending issues

Science fiction is most often appraised for its subtle commentary on pressing concerns. For instance, 1984, the most famous novel by George Orwell, is time and again invoked as a metaphorical reference in contemporary discussions about totalitarianism and mass surveillance.

Another classic is The Time Machine by H.G Wells, which explores time travel, industrial relations and class stratification.
Douglas Adams’ The Hitchhiker’s Guide to the Galaxy is considered to be a satirical take on modern society, reflective of the conditions of 1970s England.
The cult classic sci-fi film Avatar has been panned by both admirers and critics for its powerful depiction of controversial themes like racism, imperialism, specifically American militarism, and human impacts on the environment.
Similarly, the best-selling novel and now major picture, Dune, is seen as a commentary on power politics, race and imperialism.
Part of why sci-fi is so popular could also be due to the desire for escapism; an opportunity to imagine a different world from the mundaneness or horrors of the present one.
Science fiction is sometimes accused of being a tool of political propaganda. The Star Wars franchise has been interpreted by some as a subtle glorification of pro-American values and a vilification of the Soviet Union. Similarly, the wildly popular Marvel Cinematic Universe films and series are also accused of being funded and heavily influenced by American security agencies to spread pro-American expansionist ideas. In the Indian context, the recent hit film Brahmastra won praise for being Bollywood’s first modern sci-fi work. One resounding critique of the film was its covert glorification of Hindu nationalist themes or symbolism.
Sci-fi works like Avatar and Dune have been criticised for perpetuating the myth of the “noble savage” or the concept of “white saviours” or unflattering racialized depictions of colonised/indigenous peoples.
In summary, it is a highly interesting, entertaining and yet informative genre of literature and cinema which has immense potential for sparking discussions on various relevant topics. The multiplicity of approaches and perspectives on the same piece of sci-fi work is a testament to its relevance.
It has a lot of potential to serve as a springboard for striking up conversations with people about socio-political issues.
In recent times, there has been a renaissance of sorts in the field of sci-fi with authors of marginalised backgrounds claiming space and telling their unique stories, thus expanding its scope.