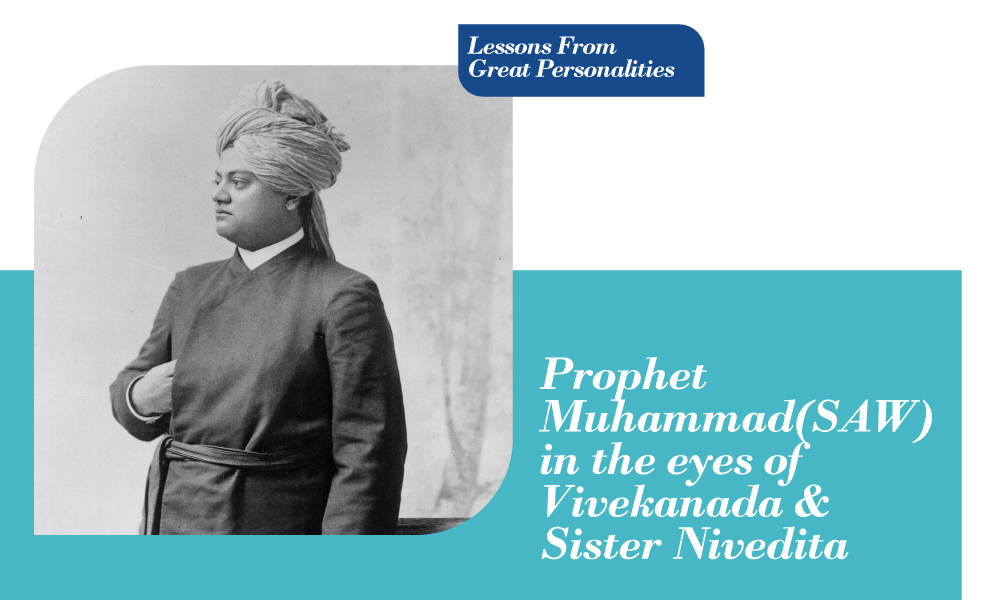 Category : Lessons from Great Personalities
Author : Mahfuza Tarannum
During a speech in America (3 April 1900) he said about Prophet Muhammad (pbuh), “Our gaze falls on the great man (Muhammad) who has brought the message of equality to the world”.

Swami Vivekananda (1863-1902) throughout his life taught the nation to look at other religious doctrines with respect. Unfortunately, have we been able to understand the essence of his teachings? Even today many people think of other religions, especially Islam as having an ‘external origin’. Most of us have little idea of the tremendous revolutionary importance of Islam and its larger cultural significance, far from practising it wholeheartedly. However, for the sake of our welfare, it is necessary to put an end to such negative attitudes.

Vivekananda admired Islam’s democratic and robust spirit as he was well aware of Islam’s contribution to world culture and the unique vitality of Islam on the stage of history. Swami Vivekananda’s goal of building a great India could not be achieved without giving Islam its due status. In his writings and speeches, the topics of Islam, the Quran, Muslims and Muslim culture etc. repeatedly came up in various forms. Whenever he discussed religion, he brought up Islam with different religions. He repeatedly mentioned the great virtues of Islam. He spoke a lot about the place of Islam and Prophet Muhammad (pbuh) in history and Muslim rule in India. In his personal life as well, he was close to many Muslims.

The ferocity of religious fanaticism once made people religious and the consequences were dire and tragic. Religion is good, but fanaticism is never good. Religious fanatics have forever filled this world with violence, destroyed civilizations, and plunged entire nations into despair. Therefore, Swamiji emphasized showing respect and love to other religions and followers of religion by removing religious fanaticism and practising one’s own religion with kindness. Consequently, his life will be established as a result of universal human love and human welfare.

Swamiji has therefore beautifully expressed Islam and other topics in a multi-faceted discussion about Prophet Muhammad (pbuh) in the article ‘Hazrat Muhammad’. All the statements he made about Hazrat Muhammad during his stay in America in ‘Swami Vivekananda’s Bani and Rachana Sankolan’, were published in Bengali. There, Prophet Muhammad (pbuh), Islam and other relevant religious narratives are discussed. In the beginning, Swamiji said that Khadija (RA), a wealthy widow, was attracted to the honest and handsome young man Muhammad (pbuh) whodedicated himself to the propagation and expansion of the religion of Islam, saddened by the corruption, idolatry, superstition, and hypocrisy of society in the name of worship.

Swamiji attached great importance to the establishment of equality. During a speech in America (3 April 1900) he said about Prophet Muhammad (pbuh), “Our gaze falls on the great man (Muhammad) who has brought the message of equality to the world. You may ask, ‘What good can there be in Muhammad’s religion?’ There must be some good in his religion—if not, how has it survived so long? That which is good endures, even if other societies perish, it does not perish. Whatever is good is strong and firm, so it endures. How long is the life of an unholy person in this world? The influence of the holy saint is not more than that. Surely because purity is strength, sainthood is strength. So if there was nothing good in the Mohammedan religion, how has it survived so long? There are many good things in Islam. Muhammad is the Master of Communism—he established the brotherhood of mankind—the preacher of the brotherhood of all Muslims, and the God-sent messenger.
So we see, every incarnation of the world, every man sent by God…brings a message of special truth. If you listen to that message first and then look at the Acharya’s life, you will see his whole life being explained in the light of that truth. Ignorant fools imagine various arguments, and according to their own mental development, they invent explanations according to their own thoughts and impute them to these great men. They take their advice and interpret it according to their own opinion. But the life of every great Acharya is the only commentary on his words….”

Just as people in the West raised questions about the religion of Prophet Muhammad (PBUH), the East raised questions about his marriages. Swamiji examined Prophet Muhammad’s life (pbuh) and Islam with a liberal mind, free from religious reform. He understood that seeing someone with a prejudiced and dogmatic mind is not seeing him rightly. Messengers like Prophet Muhammad (pbuh) must have come from God, otherwise he could not have been so great. In a speech in San Francisco on March 25, 1900, Swamiji reprimanded the critics of Prophet Muhammad (pbuh) in very strong language, saying,“…You are so superstitious and bigoted! These messengers must come from God, or how could they be so great? ..In later life, Muhammad took many wives. Great men can take two hundred wives each. I will not even allow a monster like you (Americans) to take one wife. The characters of great men are mysterious. Their actions are terrible. It is inappropriate for us to judge them. Christ can judge Mohammed. Who are you? -Infancy. What are we to understand these great men?” These words of Vivekananda must be respected. This statement of Vivekananda is equally applicable to any religious leader, not just Prophet Muhammad (pbuh). Vivekananda also said in a speech titled ‘Hazrat Muhammad’, “The religion of Muhammad appeared as a message to the masses.…His first words were—“Equality.…There is only one religion—that is love. There is no soul of caste or anything else. Add this equanimity.… That great saying was very simple. Believe in one God, creator of heaven and earth. He created everything from nothing. ”

In this speech, Swami Vivekananda noted the extreme simplicity of Islam in ritual, with multitudes, gathered behind one person to pray—a great example of equality, saying, “In mosques.. music, pictures and portraits are prohibited. In one corner is an altar on which the Koran is kept. Everyone lined up. There is no priest or bishop.…He who prays (reads), he will also stand in one half of the audience.”

Vivekananda acknowledged the greatness of Islam in various contexts. He has tried to refute the popular misconceptions about Islam in various ways. Vivekananda said at a discussion meeting in London, “This kind of statement (there is no female soul in Islam) made to us is wrong. I’m sorry to say, this error has been around for a long time among Christians, and they like to maintain it. It is this strange nature of man—he is eager to preach very bad things about those whom he does not like.”
He also said, “I am not a Muslim, but I have had the opportunity to practice that religion. I found, there is not a word in the Quran which means that a woman does not have a soul. In fact, the Koran says, women have souls.”

He showed that Muslim women have many rights that progressive American women are deprived of. Vivekananda had great respect for the Islamic approach to science and culture and the progress of Islam in those fields. He has discussed in many places the contribution of liberal knowledge of Islamic culture to the renaissance of modern Europe. By comparing Islam’s free knowledge-scientific practice with the anti-science of the fanatical Christian community of the Middle Ages, it has been shown that the passion for science was strong in Islam. He said with considerable self-confidence, “Is it possible for a man who has access to knowledge and science today to be a sincere Christian? There is no direct or indirect praise of science or art in the New Testament. But there is no science or art which is not directly or indirectly sanctioned and encouraged by many verses of the Qur’an or Hadith.”
One of those whose name is closely associated with Vivekananda’s name is Sri Ramakrishna Paramahamsa (Vivekananda’s guru) and Sister Nivedita. Nivedita was one of Vivekananda’s foremost Western disciples. Nivedita’s views on Islam and Muslim life and culture were similar to those of Swami Vivekananda. Nivedita had a deep love for Muslims.

Discussing the overall impact of Islam on Indian life, Nivedita said,“…wherever education has touched the Muslim mind, well-formed nations have emerged through competition. Where there was no connection with Islam, as on the very southern frontier, this mental force could not arouse nationalism.… We have also seen that the wars fought between the Hindu and Muslim masses were more like a test of the strength of brother against brother. In this case, the fight was personal, not a conflict between two parties. The victorious side never deposed the rival’s community after victory or made a difference between the two. In Bengal, the great financiers and nobles remained Hindu under the Nawabi rule just as the Muslim naturally maintained his religion under the shadow of the Hindu throne.”Nivedita’s special knowledge about Islamic ideals, Islamic teachings, Islamic culture etc. is amply evidenced in her essay ‘Bharat Islam Dharma’. This essay bears the signature of Nivedita’s deep history-consciousness and genuine respect for Prophet Muhammad (PBUH). According to Nivedita’s words, once during her visit to England, she was very happy to say how perfect the knowledge of the Turks is about the sea, and how polite they are.