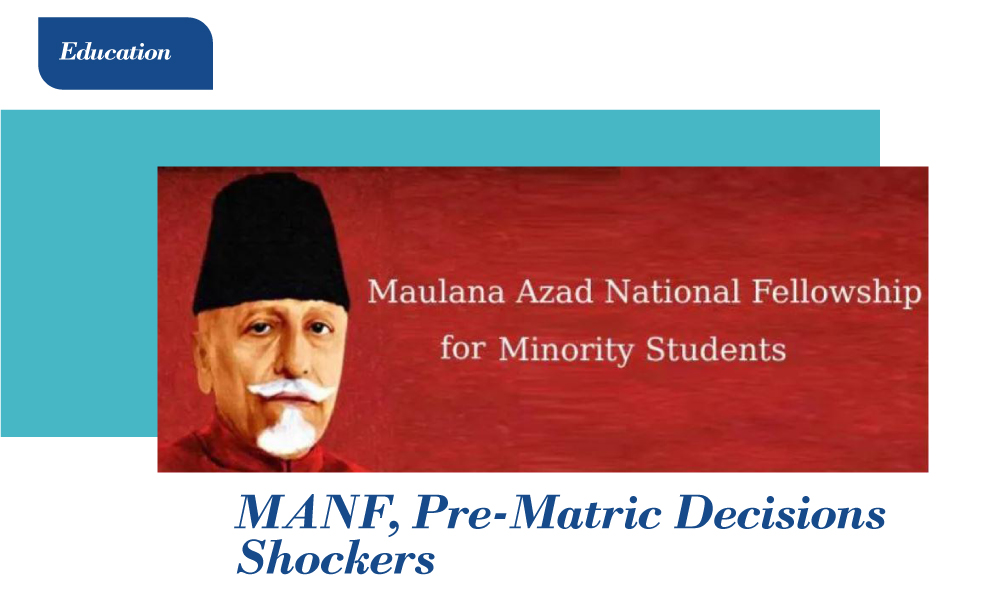 Category : SUCCESS STORIES
Author : Aura Staff
When the ruling dispensation has always claimed that Muslims, by nature, due to orthodoxy or just plain distractedness (a penchant for terror, love jihad, religious conversion…you pick), are uninterested in education, it sure is ironic that scholarships and fellowships meant to encourage Muslim youth are being systematically demolished. For a while, the entire discourse seemed to hinge on making Muslims more ‘scientific’, and ‘progressive’ and releasing them from the clutches of their so-called clergy. In the post-Sachar world, which revealed that Muslims were not backward as a religious community, but due to socio-economic reasons, this meant championing certain fellowships, schemes and courses to ‘bring’ Muslims into the mainstream.
But times have changed. In the ending days of 2022, two major decisions – to exempt classes 1-8 from the Pre-Matric Scholarships for Minority Students, and to put an end to the Maulana Azad Minority Fellowship – have come to light. Both, at two different levels of education, mark a significant blow to the educational prospects of minority children, particularly Muslims, who are the most in need of such support systems. This comes in the aftermath of the systematic attack on madrasas, both at the discourse level and legally, in states such as Assam and UP. If students going to madrasas are meant to enter the ‘modern’ world by shifting to modern education, as it has often been pushed by successive governments, where will they find the money to do so? If somehow, they manage to scrape together enough to reach the hallowed portals of a higher university, what then, is the solution? The prestigious UGC-NET/JRF exam only allows a sliver of all applicants to claim the fellowship, and no other fellowship is meant exclusively for minority communities.

In her essay “A Room of One’s Own”, the author Virginia Woolf sketched a life story of “Judith Shakespeare”, the imaginary sister of English literature’s great playwright and poet, William Shakespeare. Woolf wondered
if a young woman counterpart would be able to succeed the way William had, given her circumstances – “His extraordinarily gifted sister, let us suppose, remained at home. She was as adventurous, as imaginative, as agog to see the world as he was. But she was not sent to school. She had no chance of learning grammar and logic, let alone of reading Horace and Virgil. She picked up a book now and then, one of her brother’s perhaps, and read a few pages. But then her parents came in and told her to mend the stockings or mind the stew and not moon about with books and papers.” Judith has come to represent a dream denied due to her social location and identity, as someone who, despite her talent had more restrictions on her than her male counterpart.

Muslim students in India, like the fabled Judith, have more hoops to jump through and more obstacles to get by than others. If they do manage to get into a classroom, there are comments, jeers and suspicious gazes to deal with, as a student of MIT in Karnataka recently discovered, or outright violence, like Najeeb Ahmed in 2016. Yet, unlike the Judith of the story, there have been many improbable successes. Muslim women in particular have shattered all expectations and stereotypes into which they are bound. But, at what cost? In the post-COVID world (is it truly post, one wonders in light of recent news…) and the crumbling economy, and the unemployment that gazes back at even the brightest of newly-minted PhDs, what are the mental, physical and financial costs of this journey? The MANF in particular already had several problems and flaws in its implementation. For instance, in making UGC NET mandatory to be eligible for it, a lot of prospective students were already rendered ineligible for it. These issues had to be addressed instead of eliminating the fellowship in the name of ‘overlap’, a sham claim since almost all fellowships have some overlap with each other in terms of possible applicants, and no one researcher can avail of two fellowships simultaneously.

There used to be a popular slogan in the students’ movement, back in the days of the Occupy UGC movement. It roughly translates as – the expenditure on education must amount to 10% of the budget. This remains a dream. Instead of increasing the fellowships that have not gone in step with the rising inflation, students find the most basic of opportunities and support systems snatched from them in front of their very eyes. Many students spent months applying for pre-matric scholarships. Similarly, a lot of young students have pinned their hopes on MANF to fund their own education instead of relying on others. Many students even use these meagre amounts to sustain their families back home. Any vision of a growing nation must accommodate the needs and dreams of the educated youth, who make up its backbone and future. But we find quite the opposite happening in recent years. It will require a herculean effort on the part of civil society and educational organizations as well as the dormant political opposition, to counter these regressive changes