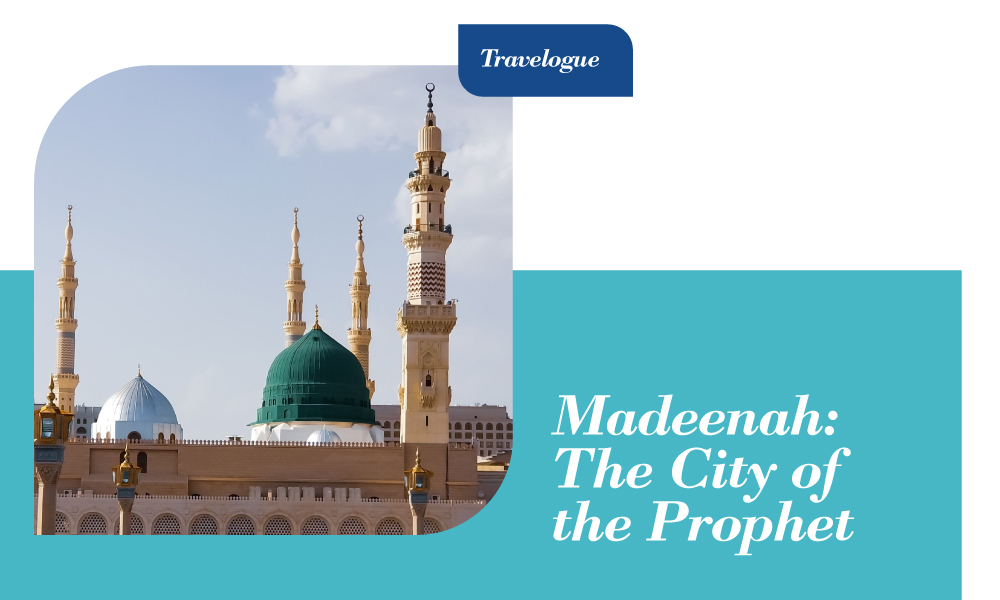 Category : Travelogue
Author : Aliya Saman Khan
Hot weather, the sun shining, flocks of pigeons flying in pleasure as I walk among them, the clear blue sky raised high without any pillars, hearts racing as those minarets come into my vision, then, finally! At the sight of the green dome of Masjid an Nabawi, my eyes give in and they are wet.

Heart longs for your presence…

Hot weather, the sun shining, flocks of pigeons flying in pleasure as I walk among them, the clear blue sky raised high without any pillars, hearts racing as those minarets come into my vision, then, finally! At the sight of the green dome of Masjid an Nabawi, my eyes give in and they are wet.

Visiting this city was the best thing to ever happen to me this year because this was the time when
I was so close to my beloved Prophet.

And what could be anything better than that in this world?
That was a complete picture of myself as I first entered Madeenah, the city of our Prophet.

I have visited Madeenah several times before but this was the time that was with complete consciousness (sha’oor) and the most effective one on me. It was almost the best time for it to happen, exactly as Allah wrote my Qadr (destiny) Himself.

As we prayed our first salah in the Masjid, I raised my hands for Du’a, but I was so overwhelmed with emotions that I could not ask Allah for anything, it was almost the feeling that ‘Ya Rabb, You have given me everything by calling me to Rasulullah’s masjid, I don’t want anything else. I couldn’t ask a single thing from Allah.’

One thing that really hit me at that time was that no amount of love you have for any makhluq (creation), there’s absolutely no way that could ever surpass your love for Al Khaliq (the Creator). Even though you love the Prophet so deeply that you’re now visiting his city and those emotions of the love for him reach an extraordinary level whilst you’re in Madinah, you are still going to make Du’a to Allah. You aren’t going to ask any Prophet, nor any Sahaba, no Aalim. No one but Allah. Subhanallah, the beauty of Islam.

All those years of wanting to enter the Masjid were never successful because I was young at that age, but this time I prayed inside the Masjid for the first time, and oh the serenity, oh the peace and contentment, that Sakina that revealed onto my heart. It was this time I could actually ask Allah (SWT) for many things.

I so strongly wanted to enter the Rawdah this time but I wasn’t fortunate enough due to the discrepancy in the permissions. Getting emotional at that moment. I thought: I see those criminals and oppressors getting VIP treatments to perform all the rights of Umrah or entering the Rawdah, thinking that it’s just so unfair to many people. But yet again, I had to accept the reality of this unjust world. I was so close to being in the presence of Rasulullah but guess it wasn’t written for me this time. With a heavy heart and conflicting emotions, I raised my hands and made Du’a to my Rabb, The Most Just that may be not in this trip, but in the next for sure; maybe not in this world, but in the next one for sure.
You would never forget the feeling and you would never want to leave the city. I still can reminisce about every moment of it. People would think, how is it even possible to love someone whom you have never seen, whom you have never met? I believe we can.

There’s nothing that I want so strongly in my entire life.