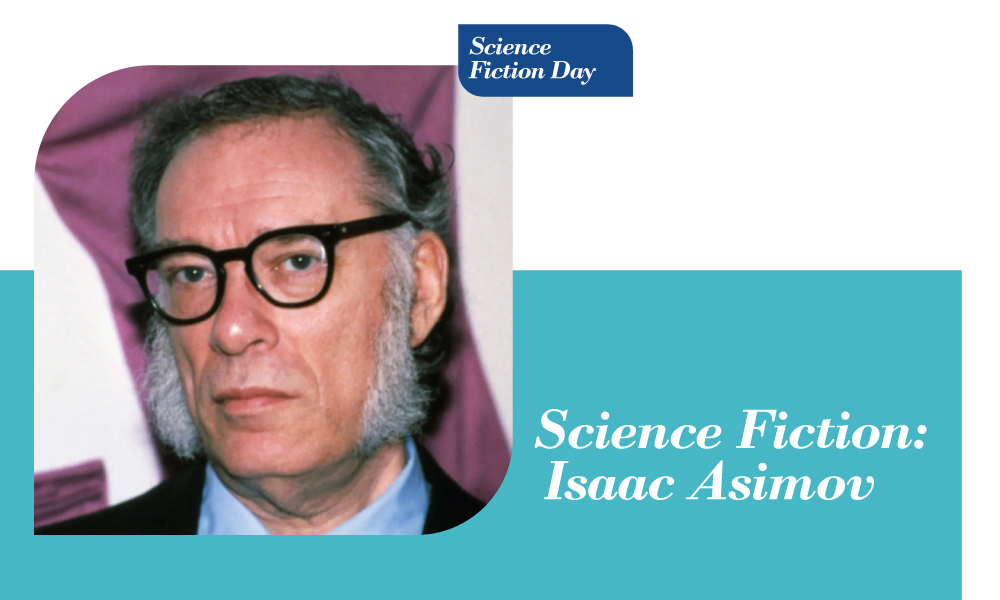 Category : Science Fiction Day
Author : Fatima aziz
Fiction by definition is any creative work, chiefly any narrative work, portraying individuals, events, or imaginary places, or in ways that are imaginary, it is what we call “a made-up” thing. Fictional portrayals are thus inconsistent with history, fact, or plausibility but have the essence of reality which makes the reader ever more deeply interested in it.

Fiction by definition is any creative work, chiefly any narrative work, portraying individuals, events, or imaginary places, or in ways that are imaginary, it is what we call “a made-up” thing. Fictional portrayals are thus inconsistent with history, fact, or plausibility but have the essence of reality which makes the reader ever more deeply interested in it. It is divided into a few types, namely Fantasy, Science fiction, Suspense, Horror, Adventure, Historical, Romance, and Mystery. Here, I will talk about science fiction. Science fiction is a genre of speculative fiction that typically deals with imaginative and futuristic concepts such as advanced science and technology, space exploration, time travel, parallel universes, etc. It is called “the literature of ideas” because of the impact of imagined innovations in science or technology, often in a futuristic setting. It gained popularity in the 1950s because developments in technology, such as nuclear energy and space exploration, coupled with the end of World War II, ignited the public’s imagination surrounding ideas of space, dystopia, alternate futures, and militarization.
World Science Fiction Day is observed on the second day of January every year as the birth anniversary of famous science fiction writer Issac Asimov. He was an American writer and professor of biochemistry at Boston University. During his lifetime, Asimov was considered one of the “Big Three” science fiction writers, along with Robert A. Heinlein and Arthur C. Clarke. A prolific writer, he wrote or edited more than 500 books. He also wrote an estimated 90,000 letters and postcards. Best known for his hard science fiction, Asimov also wrote mysteries and fantasy, as well as much nonfiction. Asimov started reading into this genre in 1929 with the pulp magazines sold in his family’s candy store. At first, his father forbade reading pulps until Asimov persuaded him that because the science fiction magazines had “Science” in the title, they must be educational and he may learn from them.
At age 18 he joined the Futurians science fiction fan club, where he made friends who went on to become science fiction writers or editors. This is where his writing journey took a step. Asimov began writing at the age of 11, imitating The Rover Boys with eight chapters of The Greenville Chums at College. His father bought him a used typewriter at age 16. His first published work was a humorous item on the birth of his brother for Boys High School’s literary journal in 1934. In May 1937 he first thought of writing professionally and began writing his first science fiction story, “Cosmic Corkscrew”, that year. On May 17, 1938, puzzled by a change in the schedule of Astounding Science Fiction, Asimov visited its publisher Street & Smith Publications. Inspired by the visit, he finished the story on June 19, 1938, and personally submitted it to Astounding editor John W. Campbell two days later. Campbell met with Asimov for more than an hour and promised to read the story himself. Two days later he received a detailed rejection letter. This broke his heart. This was the first of what became almost weekly meetings with the editor while Asimov lived in New York, until moving to Boston in 1949; Campbell had a strong formative influence on Asimov and became a personal friend. By the end of the month, Asimov completed a second story, “Stowaway”. Campbell rejected it on July 22 but—in “the nicest possible letter you could imagine”—encouraged him to continue writing, promising that Asimov might sell his work after another year and a dozen stories of practice.
On October 21, 1938, he sold the third story he finished, “Marooned Off Vesta”, to Amazing Stories, edited by Raymond A. Palmer, and it appeared in the March 1939 issue. Asimov was paid $64 for it. This is how his writing journey took a big leap. According to him, “Science fiction can be defined as that branch of literature which deals with the reaction of human beings to changes in science and technology.” He also published an article in which he divided science fiction into three categories: Gadget, Adventure, or Social. He wrote a great many books such as The Caves of Steel, Foundation, Robot, etc. His contribution to literature is evergreen and that is why the second of January is a day for celebration for science fiction readers.