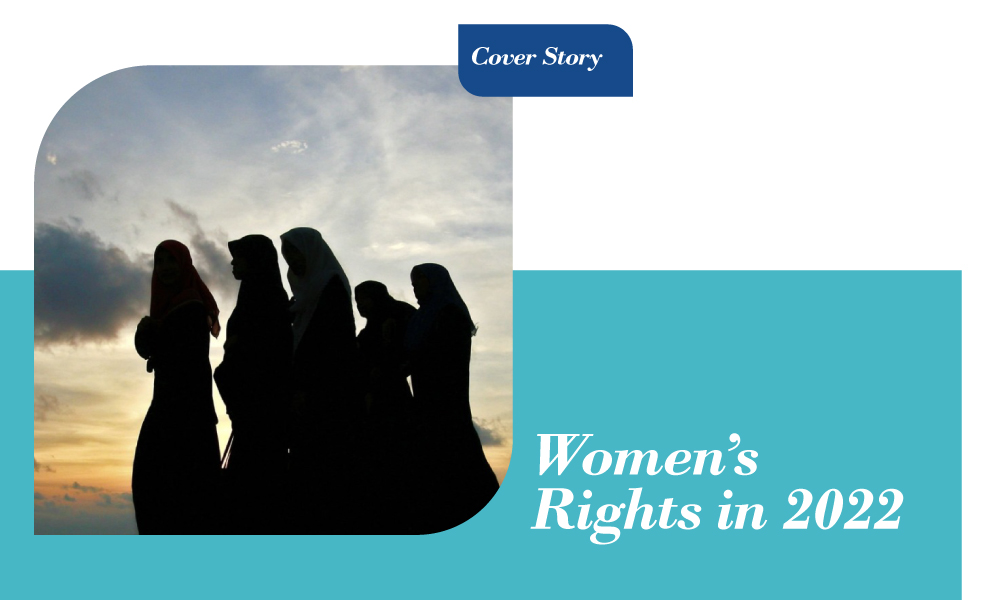 The Karnataka hijab case occupied the news waves in the first half of the year. Finally, the Supreme Court offered a split verdict offering little respite to the petitioners, and it will now be read by a larger bench.

In the first issue of the calendar year, Aura brings you a selective round-up of the big gender and women-related headlines around the world that caught our eyes this year.

1) The stats don’t lie: nearly 2.4 billion women don’t have the same economic rights as men. Around 2.4 billion women of working age are not afforded equal economic opportunity and 178 countries maintain legal barriers that prevent their full economic participation, according to the World Bank’s Women, Business and the Law report.

3) While women’s representation in the higher echelons of the corporate world has risen, does it concretely mean anything for the rest of the women in India’s economy? The representation of women on boards of companies in India during the last decade rose to 18 per cent in 2022 but the country is far behind France, Sweden, the US and the UK, according to a report. The findings for India are based on an analysis of Nifty 500 companies consisting of 4,500 directors and public source data. But we all know that representation at the higher echelons does not necessarily represent better working conditions for women as a whole.

4) In 2022, the theme of International Women’s Day 2022, which is annually announced by the UN was “Gender equality today for a sustainable tomorrow”. A most pertinent question. This is what the UN said when the theme was announced: “The year 2022 is pivotal for achieving gender equality in the context of climate change, and environmental and disaster risk reduction, which are some of the greatest global challenges of the twenty-first century. Without gender equality today, a sustainable future, and an equal future, remains beyond our reach.”

5) In 2022, UNICEF commemorated the 10th anniversary of the International Day of the Girl (IDG) – saying that “The world’s 600 million adolescent girls have shown time and time again that given the skills and the opportunities, they can be the changemakers driving progress in their communities, building back stronger for all, including women, boys and men.”

6) India’s first tribal president was elected in 2022, Draupadi Murmu. She is also the second woman to hold the post after Pratibha Patil.

7) Scheme Workers, who form the backbone of the institutionalised delivery of various Union government welfare schemes, especially those concerning public health, childcare, and education, were on strike this year, demanding: “Guarantee proper and equal wages to women workers!”, “Stop politics of riots and hate! Stop inflation and unemployment!” 95% of scheme workers are women.

9)Ten years on, little has changed. From Nirbhaya, to the recent cases of sexual violence. 2022 marked 10 years of the Nirbhaya case.

10) This year on, BCCI decided to offer equal pay to its women cricketers. A welcome move, but questions remain on whether it will truly mean equal treatment.

11) Women athletes shone at the Commonwealth Games 2022. Out of the 61 medals won by India, women, either individually or through team events, clinched 26 of them.

12) The Karnataka hijab case occupied the news waves in the first half of the year. Finally, the Supreme Court offered a split verdict offering little respite to the petitioners, and it will now be read by a larger bench.

13) Bilkis Bano’s review petition dismissed by Supreme Court:; Bano was gangraped and seven members of her family were killed during the violence that ensued after the Godhra train-burning incident in 2002. She was 21 years old at the time, and five months pregnant.

14) In a move with long-ranging effects, the MTP Act was amended to treat unmarried women at par with married women. Under this judgement, the Supreme Court also recognised marital rape. The court said that under the Medical Termination of Pregnancy (MTP) Act, rape shall also include marital rape.

15)The Supreme Court held that anyone conducting a two-finger test on a rape or sexual assault survivor is guilty of misconduct. The bench of Justices D.Y. Chandrachud and Hima Kohli termed it “patriarchal” and “sexist.”

16) Many women journalists shattered stereotypes and the glass ceiling this year, but
press freedom continues to dwindle in India, as Sanna Irshad Mattoo was repeatedly stopped from leaving India to receive awards. Other journalists too bore the brunt.

17) The year ended with Taliban’s announcement that higher educational institutions would be closed for girls; Qatar, Saudi Arabia and other countries decried the announcement.

18) Abortion debates marked both the Indian and the global networks, with wide-ranging changings in reproductive law in both countries. In US, Roe v Wade was in the news for most of the year, while in India, the amendment to the abortion law made news.

19) Iran was in the news – the entire year almost. With contentious claims around the protests and counter-claims from the ruling government, Mahsa Amini’s unfortunate custodial death led to countless protests that still continue, with little resolution.

21) Gangubai Kathiawadi, a rare Bollywood hit in the year of misses highlighted the issues around prostitution and the dark realities of the industry, while…
22) Many other films have broken the mould this year, including multiple films from Malayalam, Tamil and Kannada cinema. There have been films that debate burning women’s issues, political concerns and other unusual themes.

23) Andrew Tate, the social media influencer was all over the news this year internationally, with many debates around whether this new-age “Alt Right” movement fuels misogyny or not. As of December end, he has been arrested by Romanian authorities on charges of human trafficking.