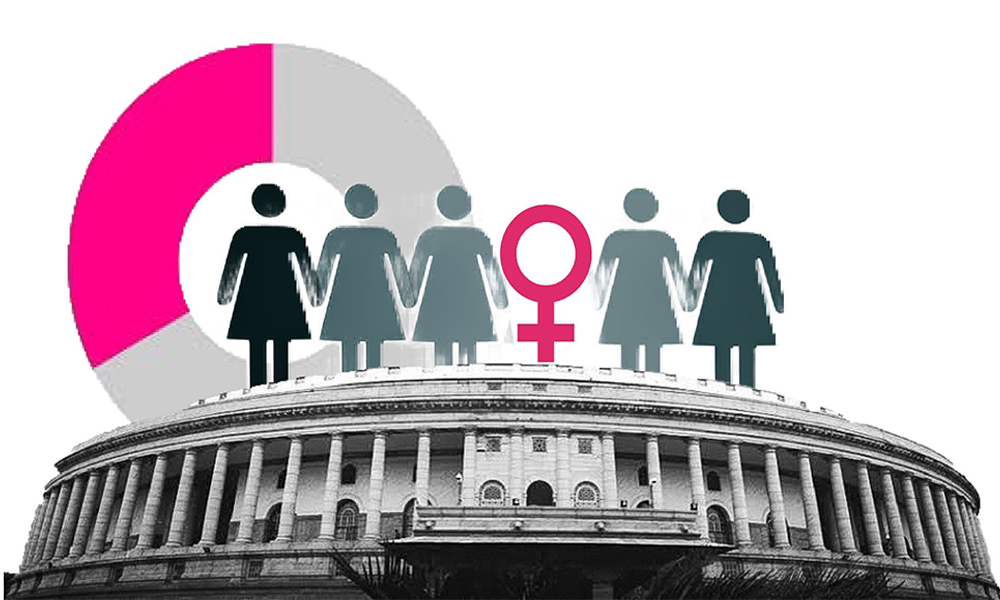 Category : THE WORLD OF POLITICS
Author : Javed Gaihlot
In July 2019, DMK MP Kanimozhi had raised the issue of Women’s Reservation Bill in the Lok Sabha.

Two years later, on July 28, 2021, Kanimozhi raised the same issue – in the same Lok Sabha.
The question and the questioner were the same, so was the answer. In fact, the reply was verbatim on both occasions. The only difference was that the answer was given by two different ministers for law and justice in a span of two years. In 2019, it was then Minister for Law and Justice Ravi Shankar Prasad and in July 2021, it was Kiren Rijiju, the new minister holding the portfolio.

“Gender justice is an important commitment of the Government. The issue involved needs careful consideration on the basis of the consensus among all political parties before a Bill for amendment in the Constitution is brought before Parliament,” replied the two ministries.

The above vague answer speaks volumes about the plight of the Women’s Reservation Bill lying dormant in the Parliament for decades.

The Women’s Reservation Bill [The Constitution (108th Amendment) Bill] seeks to reserve 33.33 per cent seats in the Lok Sabha or the Lower House and in the State Legislative Assemblies for women, in accordance with the 73rd and 74th Constitutional Amendments which reserved the same percentage of seats for women in rural and urban local bodies respectively.

The origin of this Bill dates back to a constitutional amendment which was passed in 1993. The amendment stated that a random one third of sarpanch (village council leader) positions in the gram panchayats should be reserved for women.

The Bill was first introduced in Lok Sabha on September 12, 1996 by the United Front government led by H.D. Deve Gowda.

• UPA-I government, led by the Congress, again introduced the Bill in May 2008.

• The latest version of the Bill was passed in Rajya Sabha on March 9, 2010. However, since the Lok Sabha did not vote on it, the Bill lapsed.

Arguments against the Bill

The Bill would possibly benefit only women from the privileged strata of the society. Hence, the Bill should contain sub-reservation for women belonging to the Scheduled Castes, Scheduled Tribes and Other Backward Classes.

The Bill would only help women relatives of current politicians to enter public space and thereby defeat the very purpose of the Bill.

Women as a unified community in modern India do not need reservation.

Political parties against the Bill

Rashtriya Janata Dal (RJD) has been the most vocal opponent of the Bill along with Samajwadi Party (SP), Bahujan Samaj Party (BSP) and Janata Dal (United). These political parties feel the Bill should contain a “quota within a quota” or sub-reservation for women from backward classes.

Experiments in other countries

In the early 1990s, the Philippines, Pakistan and Bangladesh enacted legislations to reserve seats in their Parliaments to ensure women’s representation.

Around the same time, Argentina and Nepal adopted a minimum quota in party candidate lists. Quotas as high as 50 per cent of the candidate list have been passed in countries like France, Korea and Nepal.

Argentina, Mexico and Costa Rica, have legislated party quotas and have over 36 per cent representation of women in their national legislatures. Women representation has been achieved by South Africa, Sweden and Germany through voluntary quotas by political parties.

According to Global Gender Gap Report 2021, India has declined on the political empowerment index by 13.5 percentage points, and a decline in the number of women ministers, from 23.1 per cent in 2019 to 9.1 per cent in 2021.

The government’s Economic Surveys also point out that women representatives in Lok Sabha and the legislative assemblies are abysmally low.

What can better sum up the issue of Women’s Reservation Bill than the observation made by Rajya Sabha Chairman M Venkaiah Naidu in March 2018? He said, “With women constituting about 50 percent of our population, social, economic and political empowerment of women, including providing reservation in Parliament and state legislatures, has to be accorded top priority for the country to achieve rapid progress.”

Now, if only they walked the talk.