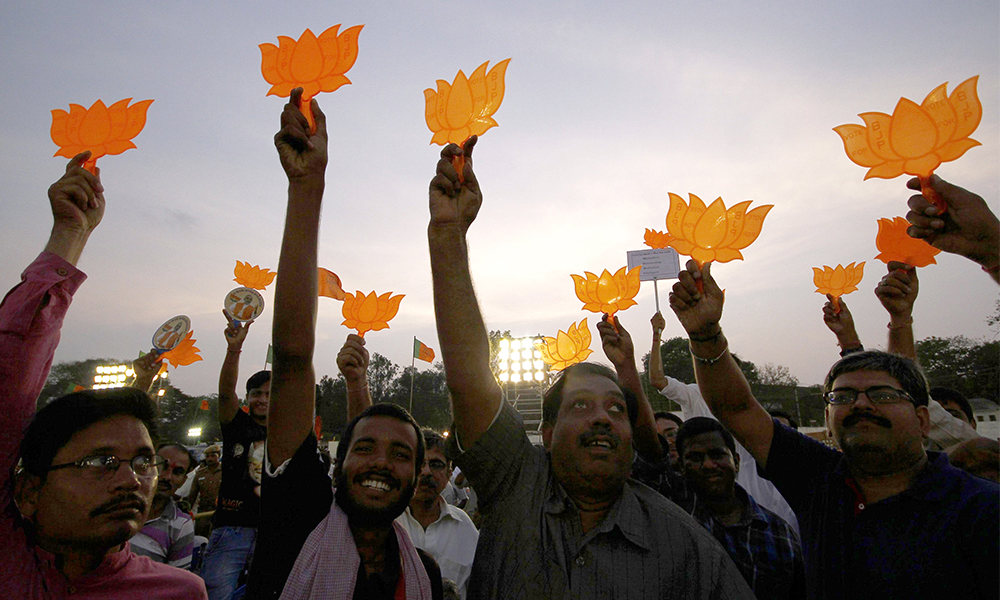 In 2016, RSS ideologue Dinanath Batra sent a document to the National Council for Educational Research and Training, demanding removal of a few Urdu words and a couplet by the poet Mirza Ghalib from school textbooks. Similarly, such discussions and demands have reduced and suppressed the contributions of women in history.

During the first week of January in 2017, a group of Indian scholars gathered in a white bungalow in Central Delhi. The focus of their discussion was – how to rewrite the history of India. The ruling Hindu nationalist government led by Narendra Modi had appointed a committee six months earlier.

The juggernaut of Hindu cultural nationalism has its eyes set on rewriting history and glorifying the mythological past of India. This history pre-dates the British colonial era and the Mughal rule in India. This narrative challenges the well-known multicultural history of India.

The ideological mentor and the parent party of the ruling government of BJP – the Rashtriya Swayamsevak Sangh (RSS) asserts that the ancestors of all Indian minorities were Hindus and that they should accept their common ancestry and bow down before the idea of a Hindu Rashtra. It conveniently calls it ‘ghar wapsi’ (homecoming).

This, many critics feel, would pave the way for second class treatment of minorities in the country. The RSS has for long advocated that the true colour of Indian history is saffron and to bring about cultural changes, it is important to rewrite history. Moreover, they say the time is ripe for reviving India’s past glory by restoring ancient Indian texts as ‘facts’ because they are widely considered as myths. Their continued efforts to undermine the accepted historical narrative of India stems from the insecurity that history as portrayed by secularists does not reflect reality.

It is very important for the Hindu nationalists to gain legitimacy by imposing their view that the current Hindu population descended from India’s first inhabitants. This notion of the Hindutva ideology stands against the fact that the country’s modern population has its origins from many different diverse sources. The ‘Aryan theory’ was embraced during British rule, which proclaimed that an influx of people from Central Asia 3,000 to 4,000 years ago swept the Indian subcontinent displacing the indigenous Indus Valley civilization. These Aryans were said to have introduced many key elements to Indian culture. One of the most prominent was the introduction of Sanskrit language which ultimately gave rise to many Indo-Aryan languages spoken widely across North, West and East India. This view challenged the Hindutva narrative that all cultural developments in India essentially have indigenous roots.

The government-appointed history committee seeks to paint a version of ‘Hindu first’ into school curricula, which has for decades taught the Aryan theory as fact. Senior figures in Modi’s party want to dismiss this theory of mass migration. Instead, they want to inject their belief into the school and college curriculum that Hindus descended from the land’s very first inhabitants and that Hinduism has deep-rooted indigenous origins.

Saffronisation of history is a fallout of the rise of Hindu nationalism, which has imposed a sense of cultural superiority, thus posing a serious threat to the country’s rich pluralism. The rights of minorities and the prohibition of religion-based discrimination has been upheld by the Indian Constitution from 1950 onwards.

Proving myths with facts or by inventing it

The Modi government-appointed committee has charted out a rather elaborate plan for their agenda which includes excavating archaeological sites and DNA testing of human remains. But ever since its formation in 2017, up until now, the efforts have only been to glorify history rather than proving it. Political patronage provided to the many claims of the discovery of modern science during ancient times furthers their agenda of rewriting history. The existence of plastic surgery which led to the birth of Ganesha wherein an elephant head was attached to a man’s torso and genetic science which led to the birth of Karna outside his mother’s womb were claims endorsed by PM Modi himself in 2014.

This in turn blurs the line between history and mythology. The committee formed by the Modi government has only archaeologists and no reputed historians. Moreover, there are no representatives from South India, no one from the minority community and not a single woman member. Many Members of Parliament have petitioned the President of India objecting that the committee does not represent the diverse pluralistic society of India. Critics have slammed the committee to be brazenly following the agenda of ‘one nation, one religion’, thereby effectively challenging the ethos of pluralism and diversity.

More than evaluating history through facts, the committee is bent upon rewriting history by glorifying a non-existent ‘Hindu’ India. Many school textbooks have already faced scrutiny by historians for their treatment of the rule of Muslims in India. In 2014, PM Modi said that India was troubled by “‘1,200 years of slave mentality.” It was quite clear that he was clubbing the roughly 200 years of British rule with the preceding medieval Muslim era. The right wing agenda is not to solely discredit the Indian Mughal history but the entire history of India’s Muslims.

Tipu Sultan is widely considered as a true national hero, as he is one of the most powerful symbols of resistance against the British. He was praised for his secular outlook and is still considered by many as the first freedom fighter of India. But recent changes in school curricula portray him in a negative light. It brands him as “a communal king who destroyed temples and massacred Hindus.”

Akbar, a powerful Mughal emperor, considered a liberal even by right wing Hindus, is widely considered as a symbol of enlightenment and religious tolerance. The saffron agenda seeks to glorify and invent Hemu, a Hindu king who fought briefly against Akbar, as the last of the great Hindu kings. In the state of Rajasthan, former education minister of the BJP government, Vasudev Devnani went a step further and changed the outcome of the Battle of Haldighati fought between Akbar and Maharana Pratap Singh. Historical records show that there was a stalemate but the BJP narrative termed it a victory for Maharana Pratap, thereby altering the accepted historical version.

Nehru and Ambedkar on the radar Devnani pushed for many more changes in the school curriculum, even entirely omitting a chapter on the first Prime Minister of India Jawaharlal Nehru for Class 8. Dr B.R. Ambedkar was termed a Hindu reformer in order to reduce the influence of his fight against the caste system. His conversion to Buddhism and the famous Mahad Satyagraha were dropped from the textbooks altogether. He was lumped along with the likes of Dayananad Saraswati and RSS supremo K.B. Hedgewar because his reforms, the textbooks argue, were similar to those brought about by them. Finally, these changes included the ‘’greatness’’ of the ‘’freedom fighter’’ V.D. Savarkar. He was included in every history textbook from Class 8 to Class 12 as someone ‘’whose contribution to the independence struggle cannot be described in words’.’ He was glorified and exalted as a ‘’great patriot, great organiser and a great revolutionary’.’ It has been observed how the word ‘’great’’ is exclusively given to only certain personalities in the BJP textbooks. It is a well-documented fact that Akbar ordered the translation of Mahabharata and Ramayana, originally in Sanskrit (which was accessible mainly to the upper castes Hindus), into Persian and Hindi. Many of the writers entrusted with this task were Hindus as well as Muslims. In 2016, RSS ideologue Dinanath Batra sent a document to the National Council for Educational Research and Training, demanding removal of a few Urdu words and a couplet by the poet Mirza Ghalib from school textbooks. Similarly, such discussions and demands have reduced and suppressed the contributions of women in history.

Saffronisation of history is a fallout of the rise of Hindu nationalism, which has imposed a sense of cultural superiority, thus posing a serious threat to the country’s rich pluralism. The rights of minorities and the prohibition of religion-based discrimination has been upheld by the Indian Constitution from 1950 onwards.

Tipu Sultan is widely considered as a true national hero, as he is one of the most powerful symbols of resistance against the British. He was praised for his secular outlook and is still considered by many as the first freedom fighter of India. But recent changes in school curricula portray him in a negative light. It brands him as “a communal king who destroyed temples and massacred Hindus.”

Anything physically or even culturally related to Muslims is being distorted and changed in order to suit the saffron agenda. Moreover, the radical change is not restricted to history in schools, colleges and universities but also to the names of places, cities, buildings, roads and stations named after Muslim personalities. Aurangzeb Road in Delhi was renamed as APJ Abdul Kalam Road. The most prominent example is the renaming of Allahabad as Prayagraj, the changing of Mughalsarai Junction as Pandit Deen Dayal Upadhyay Junction, and now, Aligarh to Harigarh (proposed). This leaves no doubt that the saffronisation of history seeks to put the final nail into the coffin of secularism and along with it, also seeks to sound the death-knell to the centuries-old cultural and academic history of Indian Muslims. National Education Policy The National Education Policy (NEP) approved by the Modi government in July last year aims to bring an ambitious and rigorous change to India’s education system. This full-fledged policy is planned for the next 30 years. The move has been accused of carrying a nationalist Hindu overtone. The 484-page policy document was passed hastily by the government last year without any discussion or deliberation in both the Houses of Parliament. It has many provisions to ‘reform’ all sections of education – primary, secondary and higher education. The education policy seeks to reinvent India under an imagined past of Hindu glory, thereby effectively challenging not only the current diversity but also shaping the future as per the saffron agenda. RSS has laid emphasis on the need to de-Westernise education and sees the rewriting of history as an “important step towards awakening the cultural consciousness in the country.” More importantly, this policy goes one step ahead in its vision to free Indian education from the clutches of Western influence by mainstreaming Sanskrit language. It delays the learning of English up to Class 8 and stresses on the importance of the mother tongue. While the policy has already been approved by the government, it has still not been implemented across the national level. Some state BJP governments have implemented it, such as Karnataka.
Conclusion History without facts and evidence and mere glorification cannot last long on shaky foundations. But the rise in ultra Hindu nationalism will constantly seek to produce a different version of history suited to the present political discourse. This can have devastating effects on the next generation of learners. More importantly, the saffronisation of not only education but of everything in India can prove to be detrimental to the values of fraternity and religious tolerance. These changes enforced upon the entire nation by the BJP-led government at the Centre will lead to the death of our democratic values. It is high time the government leaves history alone and rather than rewriting it and provoking cultural clashes among the people, actually learn valuable lessons from it.