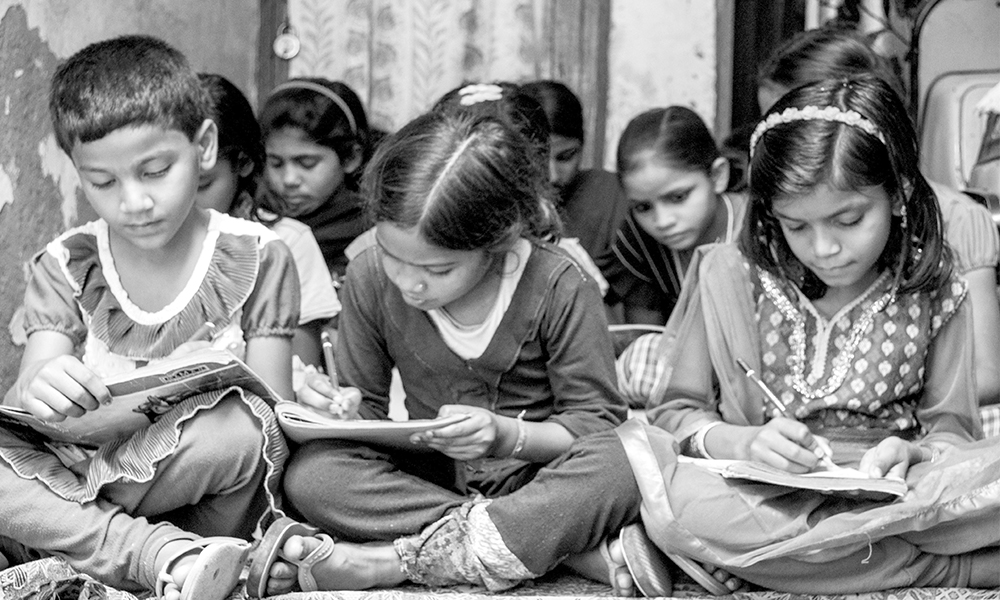 Women are an integral part of our society. Throughout history, the active role of women in society has guaranteed the progress, stability and overall development of nations around the world.

Their substantial contributions are undoubtedly indispensable for the prosperity of humanity. To ensure the mental and physical well-being of these significant contributors to society, their nurturing and care should begin right from their birth. Thus, it becomes inevitable for a society to take utmost care of their girl children. On the contrary, it is an undeniable fact that discrimination against the girl child has been a norm in many parts of the world. Thus, a woman, devalued as a child, discriminated against in receiving basic rights and deprived of love, care and emotional support naturally carries these piled up burdens into her womanhood.

While the problem of unfair treatment of a girl child is a global menace, India falls under the category of worst nations in protecting girl children. A data of 150 countries over four decades produced by the United Nations Department of Economic and Social Affairs says that India is one of the only two countries (the other one being China) in the 21st century where female infant mortality is more than that of the male child. It further states that when it comes to child mortality sex ratio, India is, by some distance the worst in the world.

This pathetic situation of India regarding its girl children could be because of the societal norm that celebrates the birth of boys and mourns the birth of girls. A girl child is hence subjected to unfairness and bigotry while she is still in the womb and this saga continues till she reaches her tomb.

While analysing the various ways in which the degradation of a girl child is intentionally carried out in India, a multitude of appalling facts unfold.

It is a matter of great concern that India’s continuous preference for a male child over a female child curtails the rights of the girls to be born in the first place. Prenatal mortality has eventually declined India’s Child Sex Ratio (CSR). According to the 2011 census, the child sex ratio is at an all-time low of 914 girls to a 1000 boys. This ratio has registered a continuous decline since the Census of 1971. According to WHO, the normal Child Sex Ratio falls in the range of 943-980 girls per 1000 boys. The NITI Aayog, while carrying out a continuous survey of Sex Ratio at Birth (SRB), has said that it has seen a nation-wide drop from 906 girls in 2012-2014 to 900 girls in 2013-2015. The SRB is the number of girls born for every 1000 boys. From 2014-2016 the SRB further saw a decline from 900 to 898.

There is a common notion that this discrimination against a girl child can be largely seen in rural areas of India due to the lack of education among them. However, it is depressing to know that this is prevalent in urban India as well, where people have easy access to newest technologies to ascertain the gender of the fetus at a very early stage of pregnancy. Research says that in urban India among the rich and educated families, the survival chances are less for a second-born girl child while already having a first daughter. It was dismal to learn that according to the 2011 census the CSR in Delhi was 871. In July 2019, an official government data from the state of Uttarakhand revealed that in three months not a single girl child was born in 132 villages of its Uttarakshi district.

Another alarming situation is that the gender discrimination against girl children doesn’t only prevent them from being born, but also causes higher mortality among girls who are born. According to a study conducted by the British journal ‘Lancet’ in 2018 the Under-5 Mortality Rate (U5MR) of Women in India, about 239,000 girls under the age of five die each year in India. That means every minute approximately 27 baby girls between the age of 0 and 5 die because of their gender. More than 90% of the districts in Indian states recorded excess girl child mortality, but the largest states of North India Uttar Pradesh, Rajasthan, Bihar and Madhya Pradesh accounted for two-thirds of India’s total number. This is again due to the preference of sons over daughters, which leads to mistreatment of girl children, neglecting them, depriving them of nutrition, medical facilities and other basic amenities.

In 2020 a United Nations Population Fund (UNFPA) report said that nearly 4.6 crore females are missing in the Indian demography in 2020 due to pre- and post-birth sex selection practices, emanating from son preference and gender inequality.

Globally one-third of the death of children under five years of age is due to malnutrition of the mother during pregnancy. However, in the Indian context the boy child is nourished after birth, while a girl child is deprived of it even after birth. The girl child is breast-fed for a shorter time. If the family is poor and is unable to provide nutritious food for the whole family, boys are comparatively given more nutritious food than the girl child. The girl child is deprived of adequate food in terms of both quality and quantity. Anemia in adolescent girls is another challenging problem that the nation is facing today, with 7 out of 10 girls found to be anemic. According to the organisation ‘Save the Girl Child’, out of the 12 million girls born in India, 1 million die within the first year and one in every two girls in India is malnourished.

Reluctance to educate the girl child:

The education status of girl children in India is again a matter of great concern. Even after over ten years of the implementation of the RTE (Right to Education) Act, its status report says that 40% of girls in the age group of 15-18 are not attending school. According to U-DISE, Unified – District Information System for Education, the retention level of girls at school in elementary level is 70.6% which drops to 55.5% at secondary level. Only one in every three girls in India completes school education (age appropriately).

Several reasons may lead to such reluctance towards educating a girl child. The foremost among them is the thought that investing in a girl’s education is just a waste of money because she has to ultimately get married and bear children. Moreover, the fear of the burden of accumulating money for her dowry leads to unwillingness to spend money on her education. Besides, the safety of a girl child, fear of sexual harassment, scarcity of schools in close distance, lack of separate toilets for girls, inability to afford sanitary napkins, inadequate number of female teachers etc. are also causes for discontinuing education. Pushing girl children into child labour and burdening them with the care of their younger siblings are often the reasons behind the reluctance to educate girl children.

The architect of the Constitution of India Dr. B.R Ambedkar said: “I measure the progress of a community by the degree of progress which women have achieved.”

Child marriage is another danger faced by girls in India even during the 21st century. Child marriage deprives girls from their rightful childhood and burdens them with undue responsibilities at an early age. Most of the girls are not allowed to continue their schooling after marriage, depriving them of compulsory education and crushing their aspirations of life.

Girl children in India face several other dangers and atrocities on a daily basis. They are victims of human trafficking. It is a known fact that most human trafficking is for sexual exploitation and most of it goes unregistered. Children are also trafficked for labour, beggary and forced marriages.

A girl child is often subjected to sexual abuse, violence and exploitation within her home and outside. It has been alarmingly increasing over the years. Accurate assessment of the data cannot be carried out as most of the cases go unreported. A data released by the NCRB reveals that 28% of all rape victims were under the age of 18 and out of the total number of children that went missing in 2018 70% were girls. It is a shocking fact that in a few rural areas of India, the Devadasi system is still prevalent, in which the girl child is offered to a temple or a deity and is later forced into prostitution.

Furthermore, the effects of COVID 19 has taken its toll on our future generations and girls are again the worst hit in the society. It has subjected girls to all kinds of violence and discrimination. Due to the closure of schools and colleges and inability of the family to take on the burden of online classes, girl students are forced to discontinue their education and help their mothers in household chores. Forced marriages have significantly increased and girls are forced into child marriages with older men to solve the financial crisis.

It has to be noted that all these injustices are comfortably done even after the Parliament has time and again passed stringent laws to curb all this menace. India has executed a number of legislations to stop this discrimination against the girl child. The Child Marriage Restraint Act, Immoral trafficking Prevention Act – 1956, Prohibition of Child Marriage Act 2006, The Juvenile Justice (Care and Protection of Children) Act 200, The Right to Education Act -2010, Infant Milk Substitutes, Feeding Bottles and Infant Food (Regulation of Production, Supply and Distribution) Act – 1992. Besides, several policies and plans such as the National policy for Children, Policy for Early Childhood Care, The National Policy on Education etc. are a few among many of them.

However, despite all these legislations, the authorities are unable to control the rising atrocities against women and are incapable of implementing the punishment levied to these crimes according to law. The Pre-Natal Diagnostic Techniques (Regulation and Prevention of Misuses) Act was implemented in 1994 to deal with the increasing female foeticide problem in India. Further the act was amended in 2003 and renamed as PCPNDT – Pre-Conception and Pre-Natal Diagnostic Technique Act. Although this law has quoted severe penalties for the violators be it the doctor, hospital or the person seeking sex determination, there is a huge gap between the law on paper and its implementation. Overall, every such law has a thousand ways to be comfortably bypassed. Many doctors and clinics covertly carry out this illegal practice across the country. According to the Quarterly Progress Reports up to December 2017 submitted by states and UTs, the implementation of the Act resulted in the filing of 3986 court cases. Around 2007 ultrasound machines were sealed and seized by the authorities for violation of the Act. However, the report also noted that from 1994 till December 2017, only 449 people were convicted. After the convictions, the medical licenses of only 136 doctors were suspended or cancelled.

The United Nations Organization has declared 11th October as the International Day for the Girl Child since 2012. It mainly aims to recognize the problems faced by girl children, promote their rights and highlight the gender inequalities faced by them.

However, laws and policies alone cannot change deep-rooted culture. A better awareness of these laws and its stricter implementation can elevate the status of girl child in India. Massive campaigns, adequate discussions, informative seminars, mobilizing masses to campaign for the cause etc. should be carried out rapidly.

The enlightened masses of the nation should ensure her the basic right to be born, to grow in a safe environment and secure opportunities to develop her potential. A change in the attitude towards the education of girl children is the need of the hour. Education alone can make them empowered and make them aware of the laws and policies that are in their favour. The girl child can then realise her potential, nurture it and contribute towards the overall development of the society through it. Her value will thus be recognized, she will not be treated as a mere commodity and will secure her due position in the society.