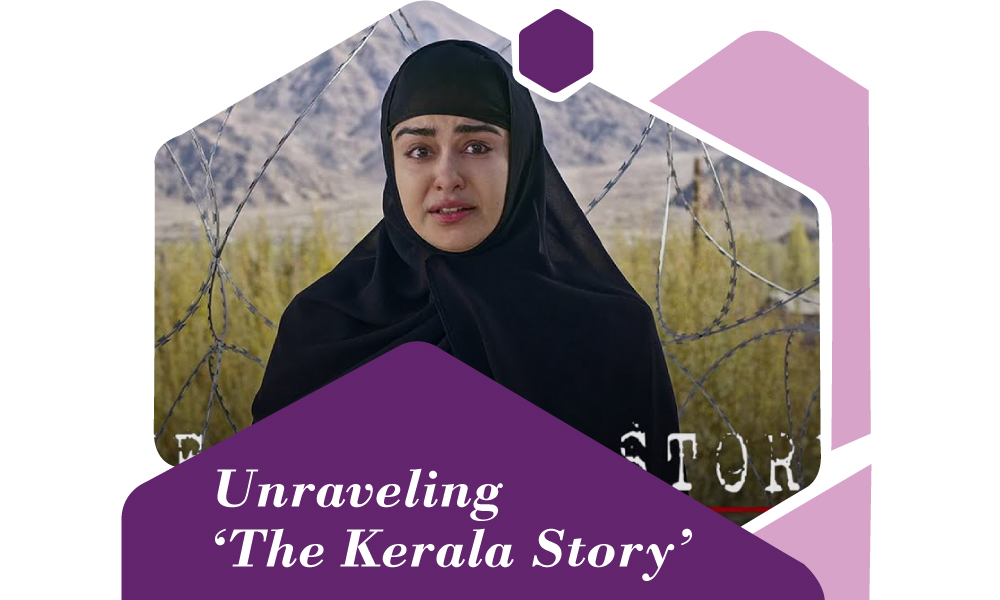 Category : MEDIA WATCH
Author : Sameena Afshan
The social media handles in India are again abuzz with a sensational story. A story that is initiated to further disturb peace in the society and spark a fresh controversy. In recent times, India has witnessed continuous efforts by some vested interests to keep the spark of controversies and animosities alive.

The social media handles in India are again abuzz with a sensational story. A story that is initiated to further disturb peace in the society and spark a fresh controversy. In recent times, India has witnessed continuous efforts by some vested interests to keep the spark of controversies and animosities alive. It seems as if the ongoing scuffle between communities is the only way for them to reach their vicious goals. Therefore, the fire of hatred is fueled time and again with baseless controversies. One such fake story is now making rounds in the media. It is a teaser of an upcoming movie called ‘The Kerala Story’. In the teaser, a burqa-clad woman who appears to be sitting near an international border is seen weeping and narrating her ordeal – that she was a Hindu girl from Kerala who aspired to become a nurse but was forcefully converted to Islam, later sent to join ISIS and has ultimately ended up in jailed in Afghanistan. She further claims that in a span of a decade, 32,000 women from Kerala have been converted, radicalised and transported to join the ISIS terrorist held areas in Syria, Yemen and Afghanistan.

There are several problems in the trailer of the movie, the claims made therein and the very making of the movie.

The movie’s name is mentioned only at the end of the trailer so as to create a feeling that the video clip is from a woman who has really ended up in the Afghanistan prison. WhatsApp University has further cropped the last part of the video where the name of the movie is mentioned and circulated it widely with an intention of depicting it as a real scenario. Moreover, the actress of the movie has tweeted the teaser with a hashtag #truestory to further fan the flames.

As for the facts and figures portrayed in the teaser, they are undoubtedly products of fabrication and misinformation. If 32,000 women have disappeared from a state in a decade’s time, the integrity and efficiency of several authorities and agencies of the nation should be questioned. This narrative may apparently seem to defame Kerala but in fact it defames the Prime Minister and the Central Home Ministry because this big number of people can never move out of the country unnoticed and unscrutinized. The film claims that the conversion of so many women, their recruitment in a terror group and transporting them out of the country has taken place unnoticed right under the nose of the Home Ministry. If so, the Ministry should either own up to it or definitely file a defamation case against the film maker.

Alt News, the Indian fact checking news website said in a report that there was “no evidence” to back this big claim. Regarding the facts and figures depicted in the teasers, the director of the movie Sudipto Sen has his own claims to make. He says that he had arrived at this number based on a statement made in the state assembly in 2012 by Oomen Chandy, the former chief minister of Kerala. The director claimed that the then chief minister had said that “every year approximately 2800-3200 girls were taking up Islam”. The director multiplied the number into 10 applying his smart mathematical skills and came up with the number 32,000. Alt News, while looking for evidence to substantiate his claim found out that in 2012 Mr. Oomen Chandy had told the state assembly that since 2006 (that is in a period of 6 years) 2667 young women have converted to Islam. At the same time he even gave information on the number of women who converted to Hinduism. However there was no mention of women joining ISIS. Mr. Chandy was reported to have said that there was no forceful conversion and fears about love jihad was baseless.

Aravindakshan BR, a renowned journalist from Tamil Nadu has written to the Chief Minister of Kerala seeking an inquiry about the figures. Talking to BBC, Mr. Aravindakshan said “Some cases may have happened, but 32,000 is an unbelievable number. This film is against the unity and sovereignty of India and tarnishes the credibility of all intelligence agencies of India’’. He also said that he has written to the state and central film certificate boards and the central information and broadcast ministry as well. The Chief Minister’s office has referred the letter of the journalist to Kerala’s DGP Anil Kant who has directed Sparjan Kumar Police Commissioner of Tiruvanthapuram to file a case against the movie. It is reported that a case is now registered under sections 153 A & B (promoting disharmony and enmity between different groups based on the ground of faith) and other sections of the Indian Penal Code

Congress party leader VD Satheesan called it a “clear case of misinformation” and claimed that the film was made to “tarnish the image of Kerala” and “spread hatred among people”. CPM’s Rajya Sabha MP John Brittas has written a letter to the union home minister Amit Shah, asking him to take stringent action against the filmmakers.

As the misleading teaser of the film was circulated, the real fact and figures of ISIS activities have come to light. The ORF (Observer Research Foundation) in its report called ‘The ISIS Phenomenon – South Asia and Beyond’ says that according to the Indian government reports, a total of not more than 200 people have joined the terror group (which is in fact an alarming fact) while Keralites make up 25% of the figure.

The intentions of the movie makers are evident here. It is to take up sensitive issues, make it sensational, try to increase its viewership by all means, play with the emotions of people, fill in hatred towards a particular community and ultimately thrive on the agenda of divisive politics. Kerala is chosen this time as a pawn to tarnish its reputation and make grounds there for hate politics in the state. Contemporary Indian movies have begun to shun patronizing art in all forms, and instead have resorted to make movies that divide communities and minds. Or maybe the movie makers and actors are trying to rescue their drowning careers, as the names associated with ‘The Kerala Story’ were unheard of until now.

Peace is a prerequisite for any society or nation to grow and progress. Centuries of peaceful coexistence of communities and societies is the beauty of India. Trying to divide minds and people in order to achieve some dirty goals will obviously lead a nation towards destruction on all fronts. It is now inevitable for religious leaders, politicians, social activists, artists, movie-makers and all responsible citizens to unite and raise their voices against these destructive forces.