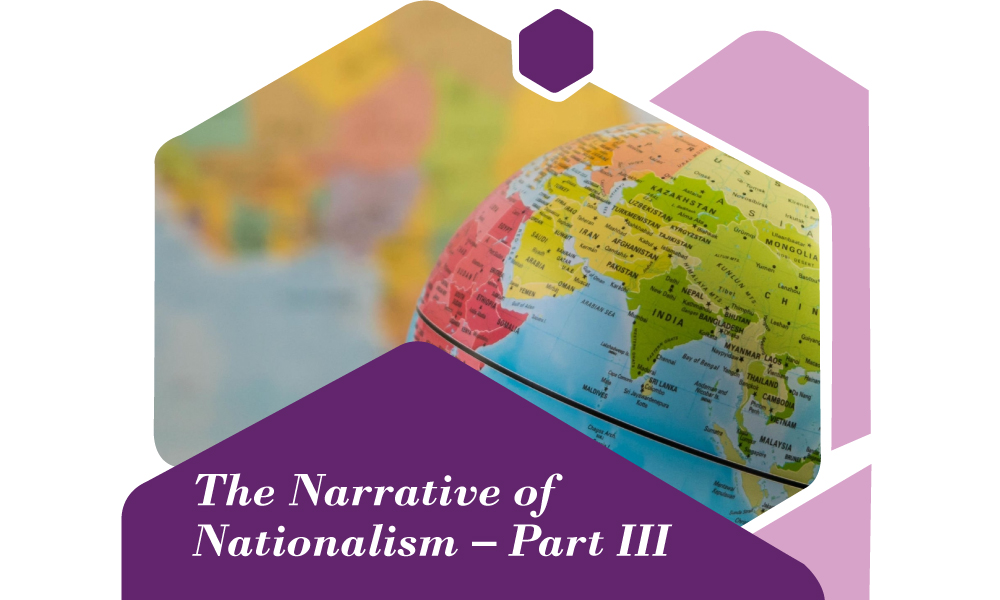 
Islam and the Concept of Nationalism

Islam rejects all concepts that discriminate against people on the basis of colour, race, caste, nation, etc. The message of Islam is the message of the unity of humans. It invites us to believe that all human beings are the creatures and servants of one God, begotten from a man and woman, siblings to one another.

Human beings, We created you all from a male and a female, and made you into nations and tribes so that you may know one another. Verily the noblest of you in the sight of Allah is the most God-fearing of you. Surely Allah is All-Knowing, All-Aware. (Al Hujurat; 49:13)

Thus, Islam recognizes an individual’s independence. The state’s authoritarian control over individual freedom is against the nature of Islam. Therefore, the concepts of fascism and integral nationalism are undoubtedly condemned by Islam.

In the mentioned verse of Surah Al Hujarat, where human equality is declared, the existence of tribes and peoples and their needs have also been recognized. The Messenger of Allah (saw) put an end to tribal animosity but did not dissolve the existence of tribes. Even after the advent of Islam, tribes remained and people were identified by their tribes. It clearly means that Islam does not approve of the division of human beings on any basis, but depending on the conditions of the times, the coming together of human beings to fulfill collective needs, adopting a collective form and attaching their identities to it, is not undesirable in Islam.

Islam values the natural feeling of love for one’s country, the Holy Quran mentions it as the worst form of oppression to expel people from their homeland.

Permission (to fight) has been granted to those for they have been wronged. Verily Allah has the power to help them: those who were unjustly expelled from their homes1 for no other reason than their saying: “Allah is Our Lord.” (Surah al Hajj, 22:39-40)

Anas (RA) narrates that when the Messenger of Allah (saw) came near Madinah, he would speed up the ride. [28] The Prophet (saw) used to pray: O Allah, create in our hearts the love of Madinah as you have created of Makkah, and even more so. [29]

It should be clear that this natural spirit is different from the artificial spirit of integral nationalism, in which the homeland is made the basis of nation-building. And there is an unnatural attempt to merge the entire nation into one civilization. When people living together in a place form a state and some of their interests are shared, then the love for their place and the protection of their interests becomes a natural feeling. This is what is meant here.

The fact is that man is a social being and is forced to adopt various collective forms for many of his needs. Every collective form requires loyalty. And when a man is associated with it, he fulfils the right of commitment and loyalty to it according to the terms of the contract, and love for it naturally arises in his heart. When a person moves around, he is identified by the type of neighbourhood and community and gradually develops a love for this relationship. The people of the colony struggle together on the common problems of the colony. Similarly, the district, region, and state all have individual affiliations with them.

If a person works in a company, he is loyal to the company. He/she is loyal to the cricket or football team he/she plays for and tries his/her best to prove it. Political, and socio-religious parties, associations and organisations demand loyalty from their workers. In the same way, if the people living in a region form a common political system and agree on a constitution, then the formation of a nation, to support that particular nation in legitimate matters and loyalty to it, will not be in conflict with the principles of Islam.

This kind of loyalty, commitment or love will be a crime only in two cases. It is also explained in the texts. One is when this natural love or affinity brings about a feeling of superiority complex in oneself and they look down on other nations. Secondly, when the nation is supported in its injustice and oppression. It is reported in the books of Hadith that a Companion asked: “O Messenger of Allah, is it partiality to love a man of your own nation? He replied: No, but it is a sin that you help your people in their oppression.” (30)

Undoubtedly, on what basis should the political system be run and what must be its principles? Islam has its own perspective in this regard. It is the responsibility of the people of Islam to invite people to these principles of Islam and try to implement these principles whenever the governance of the state is in their hands. What is under discussion here is the situation of joint societies where followers of different religions exist in the state.

In such a situation, for the purposes of law, order and justice, agreeing on a constitution and running the state based on it, is the viable way. Considering these limits, the formation of a state on the basis of joint agreements and remaining a member of it is found in the life of the Messenger of Allah (saw). The Jews lived with all their rights in the state that the Prophet (saw) established in Madinah. Therefore, in the words of the agreement, were these words

“The Jews of Banu Auf will be one nation with the believers. For the Jews will be their religion to follow and for the Muslims their religion.” (32) He (saw) made similar agreements with the Christians of Najran (33). This was not an agreement between two separate countries or states. The Prophet (saw) had established a state. He himself was the head of it. The administration of this state was based on some treaties. The characteristic of these treaties was that non-Muslims were given the freedom to manage their own affairs. They were given the freedom to practise their religion. There was a clear delineation of the affairs that would be common among Muslims, non-Muslims and all the inhabitants of the state and the rules and etiquette for conducting them were clearly mentioned.

This is the case with constitutions in newly formed states, and that is the reason many biographers and writers have called the agreement of the Prophet with the Jews the ‘first written constitution’. This highlights the characteristic of Islam that it does not impose its religion on individuals by force, nor does it try to assimilate cultural groups by force. It also grants freedom to individuals and gives cultural freedom to cultural groups. We believe that this Prophetic model was closer to the concepts of urban nationalism. The aspect of similarity was that a common state was formed on the basis of the constitution by combining groups with religious and cultural diversity.

The important question remains, what is the relationship between urban nationalism and the national existence of Muslims? This discussion makes it clear that the status of Muslims as a nation and ummah is not in conflict with their status as Indian citizens. If we take the meaning of the nation which was defined in the background of European nationalism,
then surely the cultural identity of Muslims would be questioned. But a civil nationality based on constitutional agreement binds separate cultural groups together on the basis of agreement. Muslims can remain part of this urban nationhood while remaining strongly associated with their unique cultural values.

The Hindutva movement, the vanguard of aggressive nationalism, is importing into India the European concept of nationalism i.e. Integral Nationalism, which has now been rejected all over the world and whose disadvantages have become evident. This concept is an alien and imported concept to India. In the specific context of India, this concept is irrelevant because there is no ‘nation’ that speaks a single language, has a completely uniform cultural heritage and cultural values, or has a single tribal identity. This country is not a ‘nation state’ but a ‘state nation’. That is, there is a nation which is formed by joining different groups on the basis of constitutional agreement. The process of turning it into a homogeneous nation is an unnatural process that can achieve no other purpose than to separate the country’s people from each other and create chaos and sedition in the country.

Compared to integral nationalism, the concept of civic nationalism is common all over the world. This concept was popularised by many national leaders in our country. This is also the concept of the Constitution of India[34]. Under this concept, the constitution and
constitutional values are considered the basis for uniting different cultural groups and forming a country. This is the common practice in pluralistic societies around the world and in the case of India, this is the viable path. The supremacy of the majority culture or calling it a national culture or making this culture the basis of nation-building is not only stupidly impractical but is actually a source of national chaos. This is not the way to build a nation but to destroy it. Not only Muslims are affected by this destruction, but all the cultural and linguistic groups here and the whole of India, and even South Asia.

The concepts of integral nationalism contradict the teachings of Islam. In plural societies, the path to civic nationality is a viable path. In such societies, Islam expects its followers to live in the society as bearers of Islam and its ambassadors and to fulfil the right to represent Islam in society.

22. https://indianexpress.com/article/india/ more-than-19500-mother-tongues -spoken-in-india-census-5241056/
23. Maulana Syed Abul Ala Maududi (1963); Indian Independence Movement and Muslims; Part I; Islamic Publications (Limited); Lahore; p 59
24. M.K. Gandhi (1927) Indian Village p. 170 as referred in Shriman Narayan Ed.(1968) The Selected Works of Mahatma Gandhi; Navjivan Publishing, Ahmedabad. pp. 247-248.
25. Sir Rabindranath Tagore(1917) Nationalism; The book Club of California; San Francisco; pp. 27-28.
26. Rabindranath Tagore (1985). The home and the world; Penguin; London; p. 29.
27. Musnad Ahmad, the rest of the Musnad of Ansar, the Hadith of the Companions of the Prophet, peace and blessings be upon him, narrated by Abi Nazra, Sahih al-Albani fi Sahiha.
28. Sahih al-Bukhari, Kitab al-Fadail al-Madinah, Chapter al-Madinah, Tanfi al-Khabt, narrated by Anas bin Malik
29. Sahih al-Bukhari, Kitab Al-Marda; Chapter Iyada al-Nisa al-Rijal; narrated by Aisha rta
30. Sunan Ibn Majah; Kitab Al Fatan; Bab al-Usbiyyah ~ Hadith No 3974 31. Al-Hafiz Ibn Kathir (1991) Al-Badaiya wa Nahaiya; Part III; School of Al-Maarif, Beirut; p 225
32. Al-Hafiz Ibn Kathir (1991) Al-Badaiya wa Nahaiya; Part III; School of Al-Maarif, Beirut; p 364
33. See full documentation of these agreements:
Al-Doctor Muhammad Hamidullah (1941) Political Documents of the Covenant of the Prophet (peace and blessings of Allah be upon him), Publishing House of the Committee for Compilation and Translation: Cairo. 34. The following article by Shashi Tharoor on this subject is a very important article in which he has proved with reference to the decisions of the Supreme Court and reliable interpreters of the Constitution of India that the ideology of the Constitution of India is civic nationalism and making a culture the basis of nationalism. This is an attitude contrary to the Constitution of India. Shashi Tharoor (2022) Patriotism Vs. Nationalism in Journal of the Harvard Club of India; Dec 2021; New Delhi pp. 139-142. This discussion can be seen in more detail in his following book: Shashi Tharoor (2020). The Battle of Belonging: On Nationalism, Patriotism, and what it Means to be Indian. India: Aleph Book Company; New Delhi.