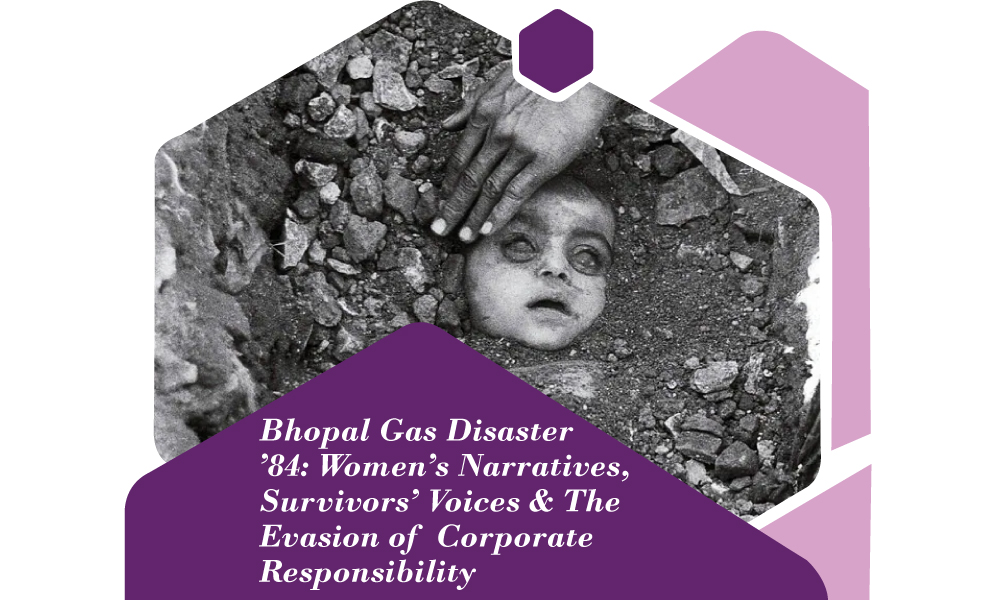 Category : THE WORLD OF POLITICS
Author : Aura Staff
The iconic photo that came to represent the disaster, taken by Raghu Rai
December 2022 marks 38 years of the horrifying Bhopal Gas Disaster, a tragedy of epic proportions where over 500,000 people were exposed to methyl isocyanate (MIC) gas due to a leak in the Union Carbide plant. There are anywhere between 3800-16000 deaths as a result of the disaster, depending on whether you wish to rely purely on government sources, or the many more deaths that have been claimed by surveys and journalistic reports. Additionally, it left a generation of people deeply unwell, traumatized and permanently disabled. Warren Anderson, then chairman and CEO of Union Carbide, evaded all responsibility and died peacefully in the United States. The tragedy is a testimony to an absolute failure of accountability. In Suroopa Mukherjee’s book Surviving Bhopal: Dancing Bodies, Written Texts, and Oral Testimonials of Women in the Wake of an Industrial Disaster, she records the various strands that summarize the trauma left behind by the disaster. Here, we record three women’s narratives – Bano Bi, Kamala Bai and Hazra Bi.

“I ask Bano Bi to describe the moment and she lowers her voice to a hoarse whisper and says, “So many years have gone by and yet my hair stands on end whenever I look back and remember those scenes! We left the door of our house open and began to run. We joined the surging crowd. We ran blindly. Everybody was running; those who were weak and gasping for breath fell down. We did not stop to pick them up.”

The story of sixty-year-old Kamala Bai is even grimmer. She is gas affected and lives in Annu Nagar, one of the water-contaminated bastis. She lives close to the railway line in a shack made of plastic sheets and gunny bag. She has cervical cancer and gets her radiation therapy from Sultania Hospital. Her son and daughter-in-law have refused to look after her since they are too poor to take care of a sick member of the family. “I am ready to die,” says Kamala Bai, “I feel so alone and sick with no money at all.”

“All those who come and interview me I tell them the same thing. Do not interview me for your personal benefit. Do not refresh my wounds, do not treat my tears as water, do not consider this as a cassette that is playing and repeating . . . I give these interviews thinking that if our fight can gather strength and my voice goes far and if after watching this someone is being motivated, or has feelings of sympathy in his heart, and he adds his strength to the fight and maybe Bhopal gets justice soon.” – Hazra Bi, Survivor

The Bhopal Gas Disaster has been all but forgotten, except by the survivors and their supporters, as a ‘tragedy’ – one of many in our country. But the re-shaping of man-made disasters into tragedies with no actors, responsible figures or accountability allows for victims to be turned into statistics and the weary, traumatized survivors and their future generations to be forgotten entirely. Survivors have called out subsequent governments as well for failing to give them adequate justice. The aftermath of Bhopal led to resounding resistance from organized movements and NGOs that continue to put out their demands in detail, in the court of law, in media outlets and on the streets. Last year, this group of NGOs put together a program called 37 Years – 37 Questions. Yet another year has passed. Little has changed.