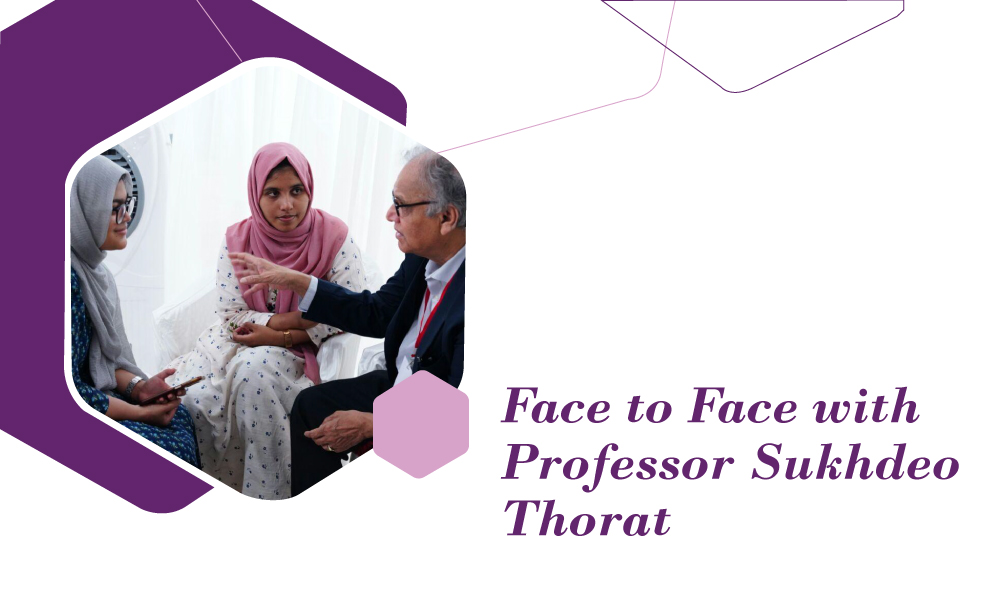 Category : FACE TO FACE:
Author : Aysha Femin NK | Zainab TP
Professor Thorat is a renowned economist, theoretician, professor and educationist. In November, Aura interviewed him on the year gone by and the major issues of social justice, education and policy that need critical attention.

Q. How do you look back at the year 2022 and all the social justice and educational issues that have come up – EWS, Dalit Christian and Dalit Muslim reservation and the changes in the educational framework?

A. It’s a good thing that these issues have come into the public sphere for discussion. In one sense, EWS was already there in one sense – every scheme you apply for has a quota for poor people. But now it has legal and constitutional sanction. But the point is, this should not impinge on Scheduled Caste and Scheduled Tribe reservations. There is an attempt on the part of the Supreme Court to say that increasingly, economic criteria should be applied for reservation instead of caste. This is wrong. Reservation is based on caste discrimination. EWS is based on income. They are two different things. Economic backwardness can keep on changing. Caste doesn’t change. Caste is independent of income. A well-off person belonging to the Scheduled Caste can still be discriminated against and therefore, needs the constitutional protection of reservation even if their income level is better. You don’t need to give them subsidies etc. But they continue to suffer on the basis of caste. So we have to be cautious about it. The Dalit Muslim and Christian issue is also important. There is discrimination. But there should be clarity and data on the aspects and sources of discrimination, and there, protection should be provided. So it’s good that these things are coming up. As far as the NEP is concerned, I feel like it’s lacking a thorough study and understanding of the education system, unlike the Kothari or Radhakrishnan Commissions which were based on a very detailed survey of the system. This Commission is not working, not have the same framework of understanding. They do mention equity but their major focus is on quality. Yet while recommending measures for quality, there is no proper consideration of equity and access. I have a feeling that the measures suggested for the improvement of quality will reduce the access of socially and economically disadvantaged groups.

Q. We live in a time of competitive exams – such as the controversial NEET exam. There is a lot of demand from parents as well for medical education, for example. How do you think this is affecting students and shaping the education sector as a whole?

A. I think that the standardised examination has its own negatives. The standardised examination doesn’t distinguish between various groups of students. It is an advantage for those students coming from money, who can go for coaching and can improve their capabilities. The economically weaker sections do not get admission. There is a report in Tamil Nadu (AK Rajan Committee Report) which studied that without standardization, SC/ST/economically poor/rural students will enter the merit lists based on their school performance. But the moment they introduced NEET, the girls, economically and socially weaker section students, even though they had better marks than those who took up coaching, could not make it. It is an exclusion of these sections of society. I think standardised testing should be discouraged and better alternatives should be found.

A. I think offering different durations for the same degree (possibilities of opting out at different levels in the undergraduate programme) is not correct – the 3 and 4-year BA degrees. This is a caste system! Those who do a four-year BA degree, do a one-year Master’s and go to a PhD directly. This should not be happening. Kothari Commission brought into practice a three-year BA program by studying the entire system. There is no clear reason why it should be increased to four years. For getting admission into colleges in the United States, you need a four-year programme. So, to help those elite sections of students who want to go to the US, they have introduced this system. But those doing three-year programs – what about them? They have also not given clear reasons behind this shift.

Q. What about the debate of social justice on campuses – we have seen institutional discrimination, and reports of discrimination in viva voce interviews, including your own Thorat Committee report. What is the status now and what are the possible solutions ahead?

A. See, the point is that we were under the illusion that a secular institution like higher education where educated people think and teach and our students won’t have discrimination. But increasingly, it has been revealed that higher educational institutions are not immune from discrimination, because the teacher and student come from the same discriminatory society and same family structures where they are influenced by the caste system and religious and gender prejudices. They come from that space only. I was asked to chair the committee (Thorat Committee) after the suicide of a Scheduled Caste student at AIIMS. I did a study with a lot of effort. It emerged that there is significant discrimination towards marginalized students by teachers, fellow students and administration as well as more broadly, in social life. There is physical segregation although there is no actual policy of caste-wise public life or spaces. There is discrimination in the messes. It has come out quite clearly. It was opposed by the institution but it led to many struggles. We have many studies on this by prominent academics, publishers and institutions proving this convincingly. To some extent, there are studies on gender discrimination, but no studies on discrimination faced by religious minorities. This has to be dealt with directly. But these issues are not being taken seriously. We require much stronger regulations for discrimination as well as sensitisation regarding diversity and differences. In the US, they have included courses to sensitise students talking about inequality, racism, classism etc. We need similar courses to do the same so at least, whatever they learn in the family and society can be unlearnt and we can create respectful citizens.

Q. Our final question – what about minorities in higher education, in the post-Mandal and Sachar era? There are debates around Muslim or minority reservation as well. What is the way ahead?

A. There are very few studies on discrimination against religious minorities in higher education in India. We require a lot of research on the many dimensions. The relationship between inequality and discrimination also has to be established with regard to religious minorities. Is inequality the total source of discrimination? If there is substantial discrimination, there has to be protection and they have to be given their fair share. There is a history of lack of political representation and inclusion as well. But there is a need to build up strong research and data on exclusion in different spheres in order to make substantive claims