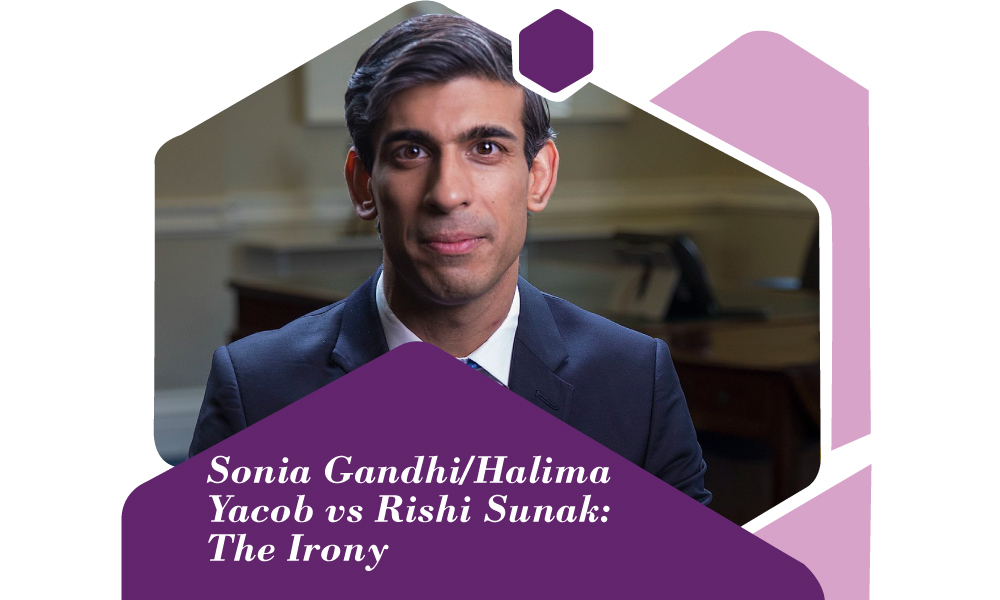 Category : THE WORLD OF POLITICS
Author : Rahamathunnissa
if all these celebrations are considering the fact that the same British who looted and oppressed India and treated the Indians as slaves for more than two centuries are going to be ruled by an Indian, which Indians have the moral right to do so? Is it the RSS and BJP whose ancestors were busy writing apology letters or the descendants of the brave Indian freedom fighters from all religious and social backgrounds?

The Indian media last month was in full spirit to celebrate the appointment of the 42-year-old Rishi Sunak as the Prime Minister of the UK. Rishi Sunak’s Indian Origin, being young, non-Christian and non-white in a Christian and white-dominated country are all reasons for anyone who believes in the true essence of democracy to celebrate.

But if we analyze the articles, Social Media posters and videos as well as the prime time ‘shows’ on this topic, one thing is very clear- Most of the celebrations were not due to the above-mentioned reasons. They were only and only because Rishi Sunak is a Hindu. He has claimed to be a practicing Hindu. While taking his oath as finance minister in May 2017, he placed his hands on the Bhagawat Gita and after announcing himself as a citizen of Britain he said: “My religious and cultural heritage is Indian. So, I proudly say that I am a Hindu and my identity is also a Hindu.” But his religion, colour or origin never was brought to debate by his opponents. One must note here that if the British followed the ideology of Savarkar, the leader of RSS and BJP, which categorized Christians and Muslims in India as second-class citizens, their holy places are outside the country, Rishi Sunak would never have become the Prime Minister. It shows that although they haven’t accepted India as Vishwa Guru they have proved themselves to be more liberal and democratic. It also shows their tolerance, inclusiveness and broad-mindedness in spite of the fact that religion and politics are closely knit in the UK and the royal family strictly follows all rituals of the faith even during politically important occasions. Still, a self-proclaimed ‘proud Hindu’ finds his way into the most important position.

So, the question that is to be raised and unfortunately not done by many is: Do Indians, especially the rightwing really have the moral right to celebrate this event? Isn’t it hypocritical? Aren’t they the celebration of rigid communal thoughts rather than the genuine celebration of getting equal rights? On what grounds can anyone claim India becoming a Viswa Guru through this event? What benefit is India going to get from this?

First of all, let us not forget the reactions of the same people and media when the Congress party wanted to select Sonia Gandhi as the Prime Minister after the party’s landslide victory in 2004. The idea was opposed saying that she is a ‘foreigner’ of Italian origin. But the fact is that she became an Indian citizen long before Rishi Sunak was even born. Still, Sushma Swaraj, a then BJP leader went to the extent of saying that she would shave off her head, wear a white sari and live like a Hindu widow for the rest of her life if Sonia Gandhi would be the PM. She also said that she would resign from the membership of Lok Sabha as she cannot call Sonia ‘Madam Prime Minister’. The other leaders, both men and women from BJP and other parties also made similar statements. The Congress party did not have the guts to face the opposition and as was evident, some of the Congress party leaders also didn’t want her to be the Prime Minister. In short, the entire drama proved how intolerant the Indian political atmosphere is towards people of foreign origin and other religions and ideologies. and how easily the Indian conscience has forgotten all these while celebrating Rishi Sunak’s acceptance in the UK!

Secondly, are we giving the same attention and showing the same happiness and excitement whenever any person of Indian origin gets any position in any part of the world? Let us analyze just one example. Halimah Yacob, a Muslim Hijab clad woman born of an Indian father and a Malay mother became the eighth president of Singapore in 2017. She is also the first female president of Singapore. Her father was a watchman who died due to a heart attack when she was eight years old. All these factors demand great coverage and celebration at her emerging into the present position by the Indians which didn’t happen. It shows how intolerant and selective the Indian media is.

Thirdly, we need to ask whether India is going to get any extra benefit from Rishi Sunak becoming the Prime Minister of the UK. He is a businessman as well as a strategic politician. As PM he will have to face a lot of challenges in stabilizing the economy of the country due to which his predecessor resigned saying she couldn’t keep her promises. Had the Indian media given more attention to this and the rulers followed her example the country would have benefited! There is no doubt that for Rishi Sunak Britain’s interests and safeguarding his own chair will be paramount. His choice of cabinet members indicates that even the FTA (Free Trade Agreement) negotiations for which India has been working with great expectations will not be as smooth as expected. The newly appointed Home Secretary Suella Braverman, even though of Indian origin, stated that she feared a trade with India would increase migration to the UK when India already had the largest group of visa overstayers. James Cleverly, the Foreign Secretary also expressed concerns over the Indian immigrants. They are only vocalizing the stand of the Conservative party in this regard and they have to.

Fourthly, if all these celebrations are considering the fact that the same British who looted and oppressed India and treated the Indians as slaves for more than two centuries are going to be ruled by an Indian, which Indians have the moral right to do so? Is it the RSS and BJP whose ancestors were busy writing apology letters or the descendants of the brave Indian freedom fighters from all religious and social backgrounds?

The people, the political parties and the entire system in the UK have given us some lessons. If taken seriously, then definitely India with a good cultural heritage of unity in diversity would have the right to become a Vishwa Guru or even beyond that. Also being a country with a greater number of youths who wish to migrate and settle in foreign countries, there will be more moral authority to claim equal citizenship rights for them.