October 2022
The Narrative of Nationalism 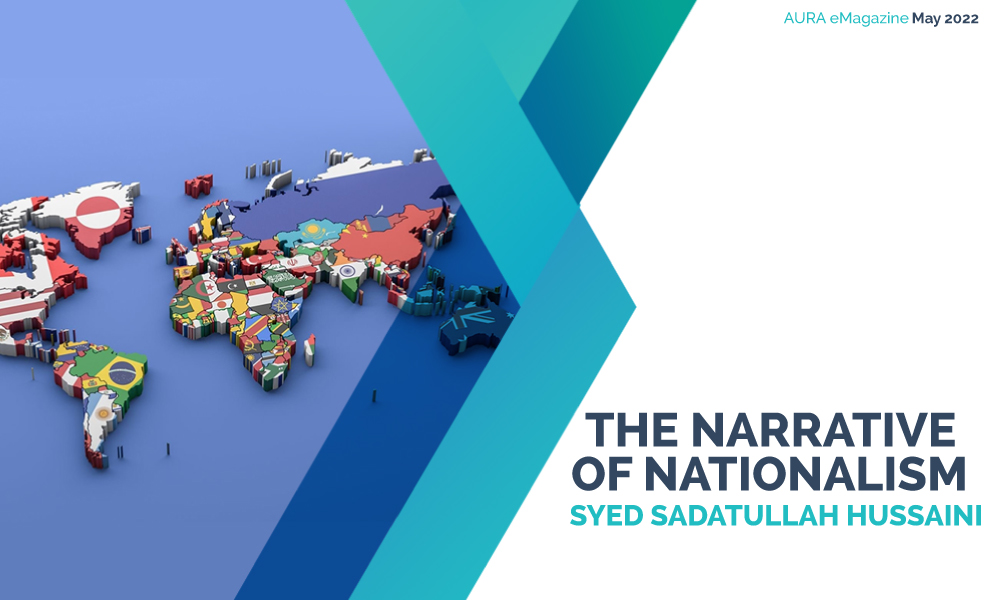 The most important and fundamental narrative of Hindutva is the narrative of nationalism. I have made it clear that Hindutva nationalism is an extremist concept of nationalism. This concept is originally borrowed from Renaissance-era European nationalist ideas and has been reshaped by attempts to give it an Indian colour by blending some local philosophies and polytheistic ideas. This attempt to import a European concept into India’s narrative is unnatural and harmful.

But the proponents of Hindutva make this concept an emotive issue and try to argue that those who do not accept their specific concept of nationhood and its associated symbols are anti-national and anti-thetical to India and its people. In this regard, it is necessary to come up with an alternative narrative of nationalism that is reasonable, consistent with the Indian context and acceptable to all sections of people living here.

As stated, the idea of nationalism, like other modernist ideas, is the product of the European Renaissance. The Industrial Revolution brought about two major changes in European society. Migration to cities had undermined traditional tribal and family affiliations and the decline of the Church had undermined the religious ties connecting people. Consequently, the need of the new economy was to invent a form that connected humans on a much larger scale and legitimize their collectivity. Therefore, a new concept of nationalism was invented, the essence of which is that the natural basis for the gathering of individuals, that is, their collective existence, is their race or nation. An ethnic group is emotionally united due to common language, common culture and cultural heritage, common history, common heroes and common traditions, etc. The members of such a unit feel close to each other, and therefore, they should form a nation together. Every ethno-nation has an independent political entity and existence. It has the right to run its collective affairs independently. Every nation is autonomous, no one else has the right to interfere in its affairs. Every nation will create an independent state to manage its affairs, which will run on the basis of democracy through the opinion of the people of the nation. It is not limited to this, but it has also been said that every nation has its own distinct civilization, that is its real identity. Commitment to this civilization is the responsibility of every individual, but beyond that, the state also has the right to impose this civilization. [1]

Consequently, in Europe, different nations came into existence on these grounds. They tried to make themselves industrially and economically developed and self-reliant. In order to advance their nations ahead of others, the process of enslaving Third World countries and looting their wealth also started. Later, when conflict of interests started among these European nations, nationalist ideologies took an extremist form known as ethnic nationalism or integral nationalism or fascism or xeno-nationalism.

Integral nationalism is the most extreme concept of nationalism. Although this concept began to emerge from the time of the European Renaissance, it began to be expressed strongly in the political system in the beginning of the last century, and until the middle of the last century, this concept dominated the European scene. Within Europe, especially Germany, became the representative of this nationalism. It was this idea that gave rise to the First and Second World Wars and for a long time, remained a source of discord among nations. Some of the salient features of this concept are as follows:

Looking at these ten points at this time, it seems that these have been written keeping in mind the Hindutva movement. But the fact is that in 19th-century Europe, these ideas ruled and gave rise to the First and Second World Wars and movements such as Nazism and Fascism. From there, these ideas were imported into India, and I have made clear, in our country, attempts were also made to give a religious tinge to these nationalist ideas and present the nation as a revered goddess, as if trying to make the fire of European nationalism a flame by fueling religious sentiment. Therefore, if this extremism is not controlled, it is feared that the damage to India will be much greater than what Europe has suffered in the last century.

By the middle of the 20th century, these concepts of nationalism and integral nationalism were almost synonymous. In this, the homeland was strongly associated with the national culture. Belonging and love for the country meant a deep commitment to national culture. It was in this background that many Islamic thinkers severely criticized the concept. Maulana Maududi’s book Masla-e-Qaumiyat, [2] Allama Iqbal’s famous poem Wataniyyat, [3] and his articles [4] were a response to these ideas. But soon in the academic world of the West as well, alternative concepts began to emerge against this extremist understanding of nationhood.

Postmodern ideas of nationalism
The disasters of World Wars and Fascism and the catastrophic economic devastation that followed in Europe raised questions about this concept of nationalism. Soon, public opinion was awakened against Fascism and Nazism and the ideologies that had ruled Europe for years became highly disliked ideas in European society (and almost taboo) and a serious review of the concepts of nationalism also started.

Perhaps the most powerful voice against nationalism at that time was raised by the famous British historian Professor Arnold Toynbee (1889-1975). Professor Toynbee analyzed in detail the rise and fall of civilizations in human history in twelve volumes of his famous book ‘A Study of History’. He described nationalism as a great evil and one of the reasons that cause civilizations to decay and collapse. The Encyclopædia Britannica summarizes Toynbee’s thoughts on the subject as follows:

“Civilizations declined when their leaders stopped responding creatively, and the civilizations then sank owing to the sins of nationalism, militarism, and the tyranny of a despotic minority..” [5]

At that time, Professor Toynbee in one of his lectures strongly criticized European nations and especially their nationalism. He coined a very eloquent phrase for Europe’s nationalist tendency, which later became a popular phrase, i.e., the ‘Dwarfing of Europe’. He said that at a time when the world was taking advantage of European civilization, Europe had the opportunity to become a stalwart global leader, countries like Russia were becoming a global power by adopting Western values and industrial development and democratic processes were strengthening globalization, Europe had dwarfed itself and walked on the path of self-destruction by depending on outdated nationalist ideas. [6]

Unerring parallels can be seen in our country as well. At a time when our country enjoys the most global influence that it has in recent history, we are playing with the same fire that had once singed Europe. Apparently, it is being projected as a determination to make India a ‘Vishwaguru’’, but the policy of aggressive nationalism is actually the process of dwarfing the country.

In the last fifty years, all the leading political scientists and historians who have written on nationalism have severely criticized this philosophy. Prominent names among them are American intellectual Hans Kohn (1891-1971), Karl Deutsch (1912-1992), Ernst Gellner (1925-1995), Eric Hobsbawm (1917-2012) and John Hutchinson (Professor of Nationalism at the London School of Economics). They have proved with solid arguments that the ‘nation’ is an artificial historical construct, and an ‘invented tradition’ created by the political elite to serve their own interests. [7]

John Hutchinson says, there is “no evidence that the masses before the nineteenth century were aware of a national identity.” [8] That is, nationalism or a ‘nation’ with a modernist connotation has no natural existence nor is it a natural need of man, but an artificially created concept to serve certain interests at a time in history. “Nationalism is not the awakening of nations to self-consciousness: it invents nations where they do not exist”, says Ernst Gellner. [9] (i.e., declaring any group of individuals as a nation under political requirements).

Albert Einstein described nationalism as a disease of childhood and the “measles of mankind.” [10] (i.e., a disease that occurs during the immature period of childhood and its effects continue to haunt throughout life). The veteran British historian Eric Hobsbawm is considered the greatest historian of nationalism of our time. He has written something interesting:

“No serious historian of nations and nationalism can be a committed political nationalist…Nationalism requires too much belief in what is patently not so. As Renan said: ‘Getting its history wrong is part of being a nation’. Historians are professionally obliged not to get it wrong.” [11]

These intellectuals also made it clear that the extremist concept of nationalism is at odds with the highest values of humanity. This concept divides mankind and leads to the despotism and oppression of powerful and influential group in the population over a less powerful group. Hans Kohn has written very correctly:

“Nationalism is a state of mind permeating the large majority of the people and claiming to permeate all its members.’’ [12]

Karl Deutsch has exposed the fallacy of aggressive nationalism with more clarity. He writes:
“A Nation… is a group of persons united by a common error about their ancestry, and a common dislike of their neighbors.” [13]

To be continued in Part II…

2. This booklet of the late Maulana is included in this collection:
Maulana Syed Abul Ali Maududi (1963) Freedom Movement of India and Muslims (Part I) Islamic Publications;

12. Hans Kohn (2008) The Idea Of Nationalism: A Study In Its Origins And Background; Transaction Publishers; New Jersey; p. 16.