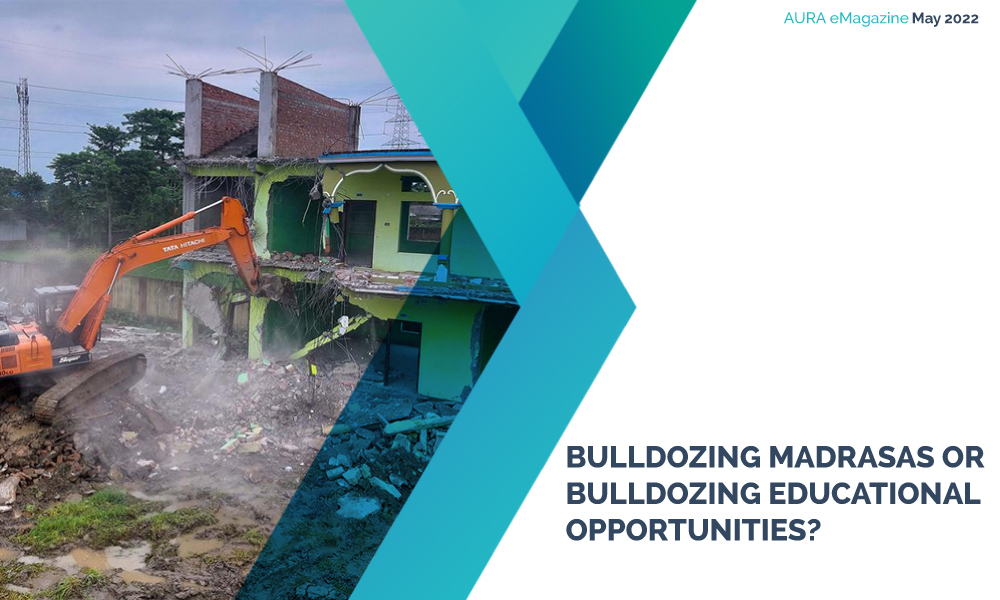 The bulldozing of a handful of madrasas in a row in Assam is linked to a larger state-run project of completely destroying the existence of religious seminaries in the state. The first blow came in 2020 when the government’s decision to close all state-run Madrasas was backed by the Assam High Court.

The bulldozing of a handful of madrasas in a row in Assam is linked to a larger state-run project of completely destroying the existence of religious seminaries in the state. The first blow came in 2020 when the government’s decision to close all state-run Madrasas was backed by the Assam High Court. This was to be followed by the conversion of all 740 government Madrasas to general schools that would provide secular education. Even the word Madrasa which in Arabic language means school was to be excluded from the name of all such institutions to get rid of their so-called Islamic identity. This move of the government could certainly have benefitted students by bringing them at par with their counterparts at regular schools though at the cost of their religious education. But what has happened now actually – does it bring anyone at par, or does it entail the curtailing of the right to education of hundreds of students who are almost unequivocally first generation literates?

Muslims are already the most marginalized social group in the realm of education in the country. Taking urgent action against places harbouring terrorism and anti-national activities is necessary and even the responsibility of a concerned government but could it have been done in a more appropriate manner? It is least expected of the government to be reminiscent of a dictatorship or a monarchy by taking extrajudicial actions against those who are innocent. If teachers or people associated are at wrong, only they should have been dealt with by the state. Madrasa graduates have often been incarcerated without any crime under various governments which is why before labelling the 37 people involved, the case needs proper investigation so as to ensure that the future of these individuals is not as bleak as of others like Mujiburrahman of Maharashtra who was arrested in 2015 by ATS and acquitted after four years when nothing could be proven.

The repercussions of this decision are going to be far-fetched for students, teachers, Madrasas and the Muslim community in general. The government’s intentions can be questioned due to no provisions being made for the hundreds of students who were studying in these Madrasas, now left in an oblivion. Their future is bizarre as they neither can afford education in private or public schools nor are they acquainted with their academic curriculum. Also, Muslim students willing to attain religious education as an informed choice are in an abyss since the security and reputation of Madrasas are at risk in the state, preventing them from enrolling in seminaries. Amidst this ruckus, remarks of Assam Chief Minister in August “Interestingly, the hub of all these activities, as of now, appears to be ‘Madrasas’. I am not generalising, but whoever has been arrested till date have had some connection with ‘madrasas’ or were acting as preachers in some mosque,” sent a message amongst masses against Madrasas which translated into demolition of a Madrasa, bearing the brunt of communal hatred and Islamophobia by a mob in the Goalpara district on 6th September. Disappointingly, the CM however comfortably forgot that the first President of India, Dr. Rajendra Prasad also hailed from a similar ‘Islamic terror hotbed’.

When questions are asked on the entire existence and need of Madrasas, it becomes elementary to reemphasize the protection guaranteed by the Indian constitution to all minority educational institutions and students under Article 30. This demolition is not merely demolition of structures but also an attempt to demolish the Muslim identity, and strip the dignity of Muslim educational institutions working in alignment with the Indian ethos since independence.

Madrasa students often hail from financially poor families who admit their children in Madrasas so that they are given education, food, clothing and accommodation. Now, when more than 200 students from a single Madrasa have been evacuated, the families who were expecting their children to return home only after completing their education with a sound job are likely to be burdened and further pushed to the periphery.

In today’s India, the attempt to invisibilise Muslims is an ongoing project. It began with their alleged dietary habits, when the supposed gaurakshaks started attacking unarmed Muslim men over unsubstantiated allegations of cow slaughter. More recently in early 2022, we had the sorry spectacle in Gurugram where right-wing mobs disrupted Friday prayers for weeks on end. The administration, instead of protecting the worshippers, asked them to reduce the number of prayer sites in the city. From over 130, the prayer sites came down to 20. Muslims were effectively invisibilised in Gurugram. The Karnataka verdict on the hijab case was similarly an attempt to invisibilise Muslim women. This verdict seems to be putting Muslim women in a lose-lose position when it could have simply upheld the idea of education. The hijab issue is important as the stakeholders here are young, female students who wish to cover their head in an educated, democratic state. These students come with the desire to learn and become independent, without it taking away from their personal religious identity. Women’s oppression is multifaceted and when the state takes away the choices of a Muslim female student at the level of the classroom, can we expect a brighter future for the girl child? Far from enabling them to enter the mythical mainstream, it will send Muslim girls back into their little islands of domestic life with no opportunity for professional attainment. The hijab ban in the classroom is not only a ban on identity but also on female expression, choice, development and the ability to break away from the shackles of chauvinists, whether judges or religious fundamentalists. So, for Indian Muslims who are already battling against bigotry and hate at personal, social, economic and political levels, growing attacks on Madrasas is not a surprise, particularly in Assam, where indigenous Muslims are often referred to as Bangladeshis or outsider, and attempts are made to align them with Bangladeshi groups by political opportunists. But it is certainly a matter of immense concern, and something that should be voiced out across the country.