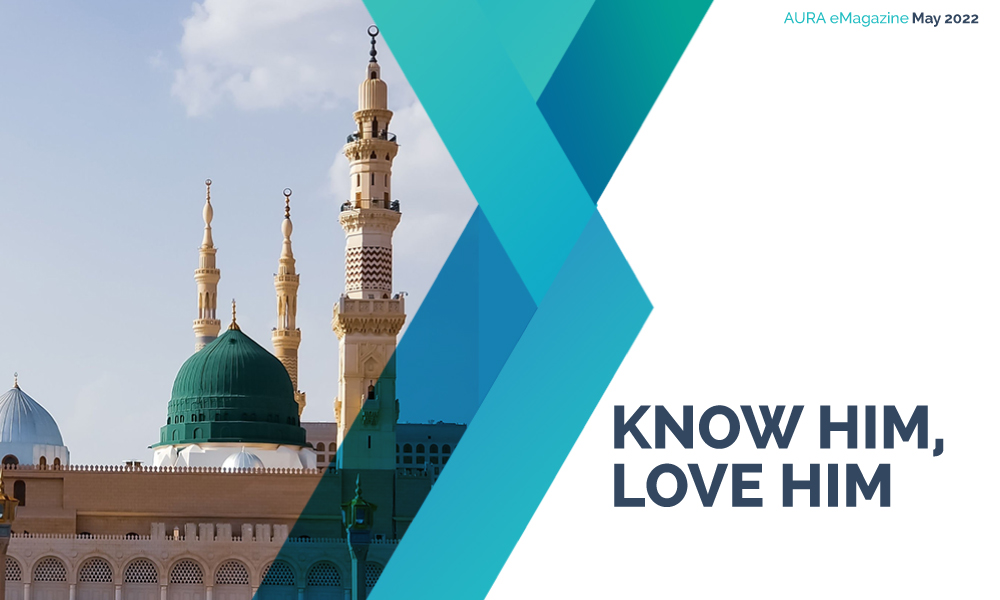 In the world of advancements and achievements, I am introducing an apostle of God, known as Muhammad (peace be upon him) to you, to think. He belongs to every human, more than what these advancements are meant for individuals and the societies. The utilitarian aspects of the Prophet’s life are quite synonymous to what human nature demands and intellect understands. The following are the reasons that help you realize why Prophet Muhammad (pbuh) is for the entire humanity and why one should love him passionately.

In the world of advancements and achievements, I am introducing an apostle of God, known as Muhammad (peace be upon him) to you, to think. He belongs to every human, more than what these advancements are meant for individuals and the societies. The utilitarian aspects of the Prophet’s life are quite synonymous to what human nature demands and intellect understands. The following are the reasons that help you realize why Prophet Muhammad (pbuh) is for the entire humanity and why one should love him passionately.

The Prophet is a Mercy for mankind

There are vital things that define the very existence of humans on earth. We know this as mercy because it defines and portrays these essentials. Mercy is not just a term for one-shot comfort; it is by all means, an all-pervasive term, just like the air we breathe and the water with which quench our thirst. The life and message of Prophet Muhammad (pbuh) is mercy in the sense it eases the difficulties, clarifies the vital concepts and makes life easy, to be precise:

He purifies your soul

One of the main purposes of Muhammad (pbuh)’s prophecy was to purify the human souls. He did it with ease and excellence. Equally focused on both this world and the Hereafter, maintained a decent balance between strengthening the strengths and annihilating weaknesses. The beauty of dealing with strengths and weaknesses is that he empowered people with an art of articulating weaknesses into strengths. The Prophetic way of purification of soul clearly demonstrates that:

Life is all about simplicity and simplification. Either humans have to be simple or let others simplify the loads that they carry. With a burden, it is hard to walk on the path of life. ‘Burden’ not only refers to agony of ill-beliefs and unhealthy practices but also to those rituals, practices and norms that are inconvenient and simply detrimental to human nature. One of the favours of the Prophet (pbuh) for humanity is that he:

The prohibitory directives form a core part of his Prophecy. It speaks of his authority and clarity of the concepts of virtues, vices and their plan of action. His acts of prevention justifiably blend with the moral, social and religious being of humans with a clear imprint of do’s and don’ts. He prohibited from:

With the prohibitions he has maximized the possibilities of doing the permissible.

Simplifies your way to Paradise

Do you know what could be the easiest way of getting into Paradise? The Prophet said the one, no matter man or woman, who:

…will get admitted to Paradise. In addition, they will be as close to Prophet Muhammad (pbuh) as the first and middle fingers are.

Prepares you for social reform

Social reforms come from within, from and by the dwellers of a society. The clarity of purpose, knowledge about the prevailing conditions, setting of a lofty vision, adherence to a decent methodology is all that is required for both individuals and groups to reform a society. The Prophet (pbuh) made the prerequisites and required activism for social reform an obstinate part of faith. A true Muslim is one who strives for reformation, if the society sports a reformed culture, he should try to develop the culture and make it reach the neighbouring societies. The main constituents of the Prophet’s methodology of social reformation are:

He stressed upon the need of doing virtuous things in the society, no matter how developed the society is or how pathetic and hopeless conditions are. The prime responsibility of the people is to perform actions. Reformed actions for the society affected with various issues or otherwise actions for advancement are highly encouraged. For any positive reformation the mindset of people matters the most. The essence of Prophetic teachings is that the society remains exemplary as long as the dwellers take appropriate actions for both favourable and unfavourable conditions. This attitude develops an ideal mindset of the people. They perceive a very realistic idea of the society, that it can’t be absolutely free of problems at any point of time. What matters is a timely action for the betterment both at individual and collective levels.

Grieves at your sufferings

The emphatic nature of Prophet Muhammad (pbuh) is quite pleasing that leads you to the details of his humane-nature. Not only the material aspects of human life such as eating, drinking and sleeping, he expressed his intense love and care for the people to have a balanced approach towards spiritual aspects too.

Makes you a human of high calibre

The beauty of the Prophet’s teachings is that they help you understand the value of self and life. The journey of one’s progress and developments begins with self-realization and a fair understanding of the strengths and weaknesses. The Prophet made it clear that the honour of being human is being a human of high moral standards. To make it reasonable and practical, he made it clear that:

Inspires you for selfless service

The Prophet Muhammad (pbuh) declared that the best of humans is one who is beneficial to one and all. In fact he vehemently proclaimed that all the creatures, not only humans, are like family of God, the best one in the sight of God is the one who is beneficial to everyone. The Prophet (pbuh) associated the idea of selfless service with belief in God. That means the faith has validity only if it is blended with actions of serving humans and other creatures. An inspiration for going ahead and excelling in the way of selfless service, he emphasized:

Makes you a true leader

First,
leadership is all about strengthening the fact that it’s an-all-time human service. Barring this reality, with little focus on service, people tend to play a gimmick to become a leader. This is what we see in today’s world.

Second,
the next best thing to assess is the overall persona of a leader. The true justification for calling a person to be a leader is to see how he dwells with his own surroundings, at home and with his neighbours.

Third and the last one,
a leader should have a very strong sense of empathy. He should literally feel the pain and sufferings of his people rather than the creatures that live in his jurisdiction. Prophet Muhammad (pbuh) exemplifies the essence and authority of leadership with these prerequisites in view as:

A leader has to be a true well-wisher not only for humans but for other creatures too.

Prepares you to protect the environment

The environment for a person holds the same significance as his home and its surroundings. Living happily at home depends on its pure and fresh ambiance. Everyone wants it to be good all the time. No one can think of causing any damage to his property, why is it so? Because everyone connects himself with his surroundings and there prevails a strong sense of belongingness with everything that exists.

The Prophet’s teachings expand the conceptual vision of a home to the vastness of the environment of which a person is a tiny part. To safeguard the environment, people should live and dwell in society as they do at their homes. The love, care and concern make a home into a sweet-home. The same should hold good for an environment to be sweet that is clean and green.

This is a just-way of protecting the environment and making people understand that it belongs to them as their homes. For a clean and beautiful environment, the Prophet’s teachings encourage:

Empowers women with the sanctity of womanhood

Though Prophet Muhammad (pbuh) explained vitals of life and all that matters for decent living for both men and women without any discrimination, there is an additional element for women. This valuable addition has elevated women’s status and position in an otherwise deteriorating society. There are innumerable things that pertain to the rights and dignity of women to mention a few:

Connects you to the Creator

With an all-pervasive influential teaching model, Prophet Muhammad (pbuh) stands significantly distinctive amidst the world of knowns. He taught the humans to worship the Creator not the created being. To understand the utilitarian relationship with the Creator we can conclude, precisely, the following from his life and teachings:

For an earnest claim “Know Him, Love Him, summarized here are reasons and substantial details of his life. Anyone who is willing to learn from his teachings will find there an immense pool of knowledge to draw upon and implement in one’s own life. There is a misconception that he is a Prophet only for Muslims or a particular community. He belongs to everyone and humanity at large, as the One Who Created all of us says in the Quran: