October 2022
Freedom of Expression and the Attack on Salman Rushdie 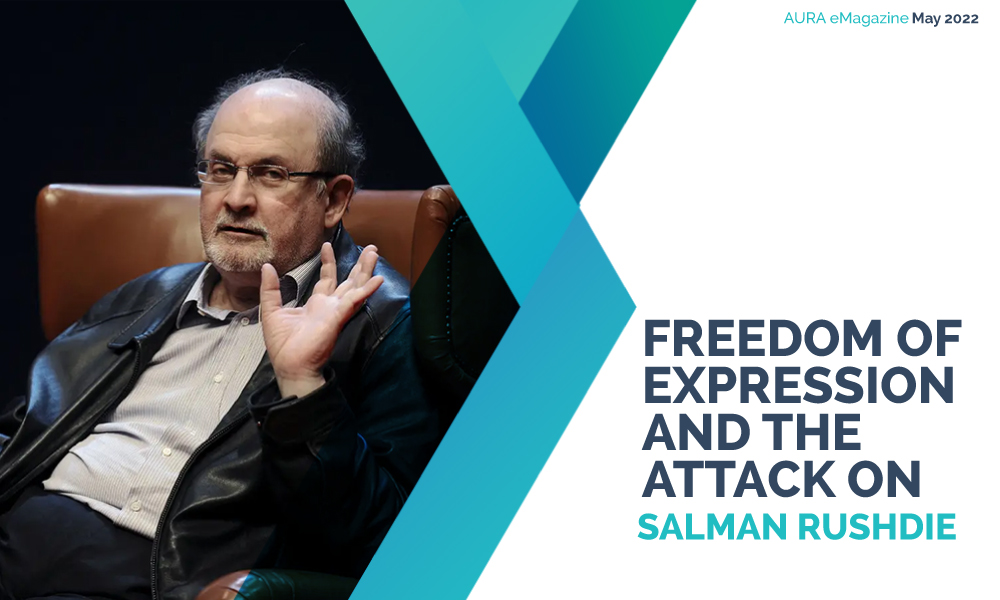 The violent attack on Salman Rushdie on 12 August 2022 when he was stabbed in the neck and abdomen while he was set to give a lecture in Chautauqua, New York, has reignited the ‘freedom of expression’ debate. In India, where the Nupur Sharma case has roiled the public sphere with a fractious intensification of discussions and opinions regarding the protocols of public expression, the attack on Rushdie refocuses our attention on the issues concerning this debate, with an added sharpness.

One response to this attack has been to see it as the most recent of a series of violent attacks on the freedom of expression, inflicted and legitimized by a religion that is regressive, amenable to dangerous forms of radicalization, and rigid in its imposition of religious practices and quotidian regimes of being on its adherents. Seen through this perceptual construct of Islam, which construct is increasingly becoming the commonsense of our times, public verbal acts of violence against Islam and its followers would be justified as much needed criticism of a religion prone to extreme measures in the implementation of its faith practices and inflicting extreme retaliatory measures if the sacrality of its religious practices or objects of reverence are decried or denigrated. Further, such a religion would be shown to be an anomaly in a modern world which enshrines the values of democracy and seeks to protect individual liberties like the right to freedom of expression.

But is heresy peculiarly religious? Do we not have profane variants of heresy like political heresy, social heresy, institutional heresy? Aren’t these heresies, which are located seemingly outside the purview of religion and faith, also meted out with equally violent but invisibilised punitive and retributive measures of control? The means by which these heresies are kept in check are so mundane and routine that we do not recognize the violence inherent to them. The modes of being that these heresies violate are so normalized that we believe that they are natural to human existence.

When a Dalit child drinks water from the pot reserved to quench the thirst of his upper caste teacher, is he committing institutional heresy? When his teacher slaps the child so lethally that the child dies, is it an acceptable punishment for the violation of institutional orthodoxy organized through the hierarchies of caste? When farmers gather together to protest against the laws passed by the authoritarian state are they committing legal heresy? Is the onslaught of the full powers of the repressive state apparatuses, on them, a justified quelling of this heresy?

Freedom of expression has been construed as the apotheosis of individual freedom, and the authentic instantiation of individual subjectivity and uniqueness. The degree to which free floating individuals are allowed to express themselves without being curtailed by authoritative regulatory protocols is the degree to which societies and nations have been gauged as modern, egalitarian and democratic. However, the authorization and normalization of some of these protocols as legal and progressive and others as illegal and retrogressive, has been the prerogative of the authoritarian state in collusion with a segment of the citizenry vested with the power of caste, class, gender or its conformity with a constructed majoritarian nationalist identity.

The question for us is whether such a freedom of expression exists at all. Expression of any kind is regulated by the grammar of communication which is always a socially constructed and shared grammar that is deployed in historically variant ways across geo/cultural spaces. Expression shapes the possibilities of being and expressing of the expressing subject. However, there will always be an incommensurate gap between the materiality of being and the consciousness of being. Expression will always be incommensurate with the material processes of being. Expression emerges at the vexed and uneasy intersection of the regulatory controls of the state, of law, of religion, of social conventions, and the dis-ease of the materiality of the body with its being in the world. Freedom of speech, whether deployed through a creative process of going astray of the prevalent historical grammars of legibility or through the radical defiance of speaking truth to power, is always generated from within the protocols of socially constituted structures of communicative grammar and the historically contingent structures of power. There is no ahistorical Archimedean space outside of all social regulations from where the free subject can utter the pristine truths of the socially uncontaminated self.

There is no unrestricted freedom of expression, because the protocols of expression have already always shaped into legibility what is to be expressed. The attack on Rushdie must startle us into a recognition that ‘freedom of expression’ is regulated by many invisible and visible protocols of power. While we should condemn those protocols of public expression which are implemented through violence and death, we should also be simultaneously familiarized to the many kinds of heresies that exist in our world and defamiliarized from the normality of violence inherent to the maintenance of these profane heresies. Such a recognition will nuance our perception of the multiple and simultaneously existing protocols of expression, organized into a many-layered, complex and delicately balanced network of coexistence at any historical point of time – a balance that sustains the equilibrium of the diversity of life forms and the range of possibilities of social living and formations of human communities in our world. The attack on Rushdie should alert us to the danger of ignoring the existence of many different languages of human existence regulated and shaped by layered and enmeshed structures of power. Freedom of Expression is an ideal that is shaped within and by the very constraints of the protocols through which expression is generated.