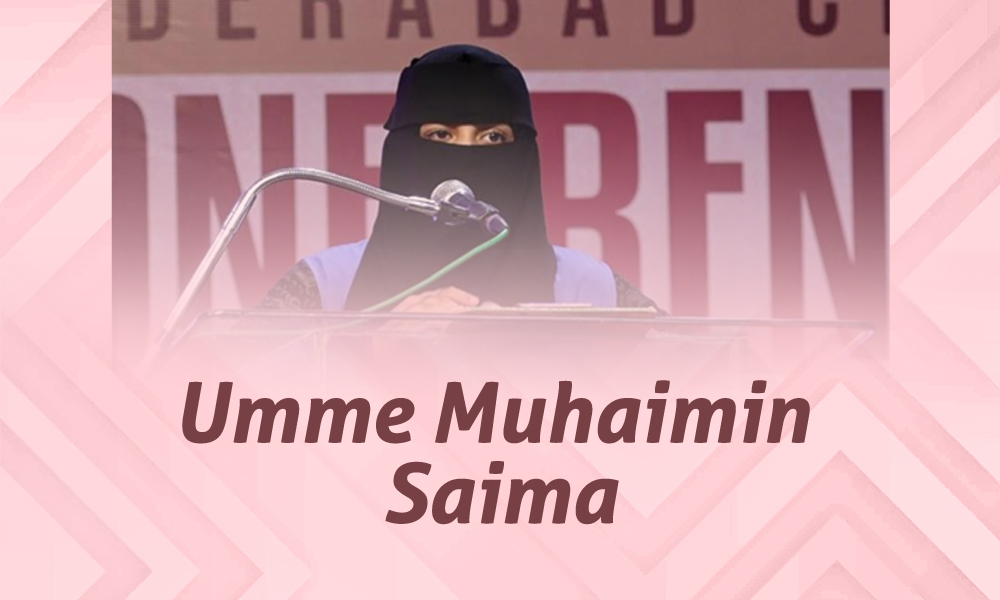 Category : Obituary
Author : Zeeshan Sarah
“No one comes to stay for a long while;No one leaves the way you left.

They were married for two months. According to media reports, an electric shock caused by a faulty geyser led to the death of Saima, and then, Nisaruddin, who had rushed to help his wife. Saima was a gifted medical student, in the final year of her MBBS; her husband, pursuing his MD. Saima was the General Secretary of GIO Telangana. Here we have reproduced one of the many loving messages by her friend in the aftermath of her untimely demise.

“No one comes to stay for a long while; No one leaves the way you left.

Saima, my sister. You left us so soon? How old were you anyway? Just 22. Were you in such a rush to reunite with your Lord, that you outpaced all of us in doing so? Despite your young age, you did a great deal – studying for your medical degree day and night, your engagements in spreading the message of Allah swt, your GIO work, and then later, for Jamaat. I got to see you on the day of your wedding – 20st August 2022 – the quintessential blossoming bride in red. We bid you with smiles that day, and today, 21st October, 2022, you have left us so suddenly. Who leaves like this without a parting word? Saima – we had bid your wedding procession adieu, now, where do we summon the strength to bid your janazah adieu? I had prayed for the happiness of you and your spouse, Dr Nisaruddin. You both fulfilled my dua to the extent that you left this world together. Now, we will only be reunited in that place, the place you reached far before any of us. You will welcome us in Paradise with your arms open, won’t you? The yearning of reuniting with you is the only thing that might put out the fire of grief in my heart. But will it actually lessen? Your always-smiling face used to act as a balm for my worries. Now, why does that always-smiling face cause so much pain? What all can we mourn – your passing, or your mother’s teary grief which is enough to overwhelm everything around it, or that father, who was your protector, who has now buried his grief in surrender to Allah’s will, and busied himself in the processes of taking your body to the hospital, going to the police station, your burial, all the while carrying his heavy heart – dying a slow death every moment. Or that sister – after whose wedding, you had taken up the household responsibilities? Or your sister’s grief-stricken children, to whom you were like a mother figure? Or your brother – for whom you were like a precious child, but also simultaneously, his great pride? Or the grief of your sisters in GIO and college, who, after your passing, are in shock, unable to stop their tears? Or the grief of Jamaat and society, whose promising and cheerful daughter has reached the other world already?

In intermediate and in the first and second year, you were ranked number 1 in all of Telangana state, and your name was all over the papers. You were the pride and envy of the state, having cracked medical without coaching so easily. Now, you were Dr Saima, about to finish your internship. At this young age, you had reached this level of responsibility within the organization, even as you were running your house as well. You were a gracious host and were devout in your prayers, (fardh) obligatory or (nafl) supererogatory, apart from all fardh and nafl fasts. You had not missed even your tahajjud in years. Perhaps, as always, you must have woken up from your sleep as always – and reunited with your Creator that day. That day marked your earnest wait to reunite with Him and Allah’s choice to call you to Him at that moment. Saima, we will live our lives trying to emulate your exemplary life.

Dr. Nisaruddin – you held our sister’s hand and did not let it go until you died. Both of your families, sisters of GIO, brothers of SIO, all dear relatives and friends – on this day of endless mourning, there is forbearance and a lack of it simultaneously. An abundance of duas from me, for the two of you. Now, everyone is engaged in bidding you farewell…

Saima, my child! Today, on Friday, I will definitely come to see you one last time to say goodbye to you…

Your grief-stricken sister, separated from you forever,