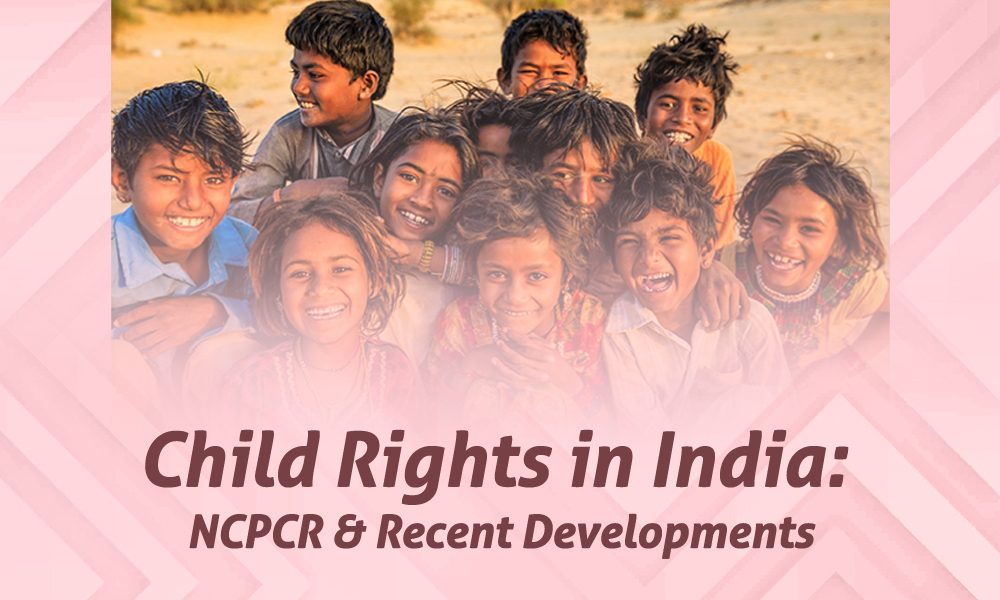 Category : COVER STORY
Author : Sadat Hussain
Things like status of child care institutions in India, children with special needs, safety and security of children of government schools and pre-matric hostels, drugs and substance abuse among children, illicit trafficking, education status of children of women prisoners in India, e-waste and involvement of children, child trafficking post lock-down due to the COVID-19 pandemic are all topics on which NCPCR has brought out extensive studies and reports.

Recently, the Uttar Pradesh government concluded its survey of madrasas. The media is now reporting (unverified and unofficial) data on the amount of unrecognized madrasas, including the famous Darul Uloom Deoband. This survey consists of twelve questions such as: name of the madrasa, name of the trust under which the madrasa is functioning, year of establishment, ownership status of building, infrastructure (safe/stable building, drinking water facility, availability of proper furniture, proper supply of electricity, toilet facility etc.), students strength, teachers strength, syllabus, sources of funding, if enrolled in other schools, if affiliated to any group or institution etc.

The first question that arises is how a state government is surveying madrasas which have the protection of Article 30 of the Constitution of India. This time the government has justified itself by stating that the survey is being conducted due to the rising concerns over protection of child rights in madrasas in the wake of the NCPCR report published in March 2021 titled, Impact Of Exemption Under Article 15(5) W.R.T. Article 21A of The Constitution Of India on Education Of Children Of Minority Communities. The twelve questions in the survey are largely covering the major parameters and guidelines set by the RTE Act 2009 and NCPCR itself.

In India, there are three important acts currently functioning with regards to the rights of children, namely:

In 2005, an Act was enacted to incorporate the National Commission for Protection of Child Rights. As per the citizen charter of NCPCR, the mission of the commission is “to ensure that all laws, policies, programmes and administrative mechanisms are in consonance with the child rights perspective as enshrined in the Constitution of India as well as in, the United Nation Convention on the Rights of the Child, which India ratified in 1992.” Under this mandate, the commission assesses and evaluates the status of protection of children’s rights enshrined under the CPCR Act 2005 and propagates those rights. This commission has formulated guidelines for children in educational institutions and hostels with an objective to protect children and ensure the rights of children in the four walls of the hostel.

NCPCR had made three claims with regards to the child rights in madrasas recently and also in their report mentioned above. These are:

Claim 1: There has been a decline of 50 per cent in the cost of feeding children in these madrassas despite the increase in the funding.

Fact-Check:This claim was made during the survey to legitimize the intrusion of state in the privately managed madrasas. This claim was also cited in the NCPCR March 2021 report. And these ideas are taken from the book of Arshad Alam, titled: Inside a Madrasa: Knowledge, Power and Islamic Identity in India (2011). The report says, “Although the collection of zakat money has increased over the years, the cost of feeding children in madrasas has rather declined and has decreased to almost 50 percent. Reducing the expenditure on food as percentage of total yearly expenditure for children not only violates the purpose for which zakat is mainly collected, but may also adversely impact the health and nutritional needs of children.”(NCPCR Report, March 2021, p 82)

The book cited by the March 2021 report is written by renowned academician Arshad Alam. The author has hardly covered more than five madrasas for his study, which was clearly outlined in his book as the basis for his field work. Nowhere did he claim to extend this data to the rest of the country. On what basis did NCPCR generalize this to the rest of the thousands of private and government madrasas functioning in the country?

Claim 2: “Our report also notes that their syllabus is from Aurangzeb’s time.” This claim was also made in the media by NCPCR.

Fact-Check: This claim was also cited in the NCPCR March 2021 report. And these ideas taken from the article of Yogender Sikand, titled “Reforming the Indian Madrassas: Contemporary Muslim Voices” from a book Politics of Minority Educational Institutions: Law and Reality in the Subcontinent (2002).

The report says, “The syllabus employed at the Indian madrasas also went through a process of gradual transformation, particularly during the reign of the Mughal Emperor Akbar, when philosophy and logic and other “rational disciplines” (ma’qulat) grew in importance. During Aurangzeb’s time, in the 17th century, a team was created to prepare a digest of Islamic Law. Mulla Nizamuddin was granted a mansion in Lucknow where a madrasa was established, to develop a syllabus and uniform curriculum of education across all madrasas. It was called Dars-e-Nizami. It primarily aimed to comprise the study of religious sciences from step one to the highest levels of intellectual spheres.”

There is no standard curriculum across madrasas of different schools of thought. The frequency and the time at which the curriculum of Madrasas changed needed to be studied. We already have examples of affiliated madrasas of Darul Uloom Nadvatul Ulama, which revisits the curriculum and syllabus regularly and makes upgrades and revisions. In fact, the whole movement of Nadvatul Ulama is about renaissance in madrasa education. We have more such examples from various schools of thought. The above claim is highly generalized and an attempt to paint the heterogeneous madrasa system as a homogeneous and monolithic system.

Claim 3: According to the report, a funding close to Rs 10,000 crore has been received by madrassas in the country every year, however 50 per cent of this amount comes from ‘secret sources’.

Fact-Check: This claim was made by NCPCR in the media, but was not made on the website of NCPCR nor on any news portals. One more report suggests that NCPCR conducted a study of madrasas for the last four years but one could not find any report on their website.

Conclusion: Whither Child Rights in India?Apart from the above three claims, the report also argued that the current condition of children in the madrasas is very dire and needs to be addressed. Living conditions, infrastructure, teacher student ratio, uniforms, quality teaching, teaching of modern subjects, cleanliness and hygiene, food and nutrition of children in the madrasas etc. have all been invoked. There is no doubt at all that all these concerns need to be addressed, nor is there any need to beat around the bush. But the way the above mentioned report has been raked up in the media and the way the state gave too much importance to the report, showering so-called concern for the children of the madrasa system raises questions about whether this is a façade or genuine care. It is an unavoidable fact that child rights all across the country are being violated in a steady fashion; but the media finds only certain arenas worthy of interest.

This question is also valid due to the lack of interest of the state and the media over addressing the concerns of NCPCR on other issues. Things like status of child care institutions in India, children with special needs, safety and security of children of government schools and pre-matric hostels, drugs and substance abuse among children, illicit trafficking, education status of children of women prisoners in India, e-waste and involvement of children, child trafficking post lock-down due to the COVID-19 pandemic are all topics on which NCPCR has brought out extensive studies and reports.

Instead, we find sensationalized headlines about ‘unrecognized madrasas’ (about madrasas like Deoband which have never claimed to be recognized, nor have they ever taken aid from the state) and the stereotyping of madrasas as a kind of repressive, even abusive hell for children. This is happening in a time when there have been rich, exploratory studies on the world of the madrasa and what it means for children and educators. Like every other institution of education in our country, they suffer from flaws, both structural and philosophical, but we do not find ‘secular’ schools being demolished swiftly when graduates of such schools allegedly commit crimes, like we find happening to the madrasas of Assam, nor do we find students of other schools being humiliated or stereotyped when they struggle to enter mainstream higher education in the way madrasa graduates are. The flagbearers of child rights, including the media which has a serious responsibility towards the children of this country, need to reflect upon the serious damage they are doing to young learners by creating an atmosphere of suspicion that is now being legalized in the forms of surveys and demolitions.