November 2022
A Month for Civil Liberties…or the Lack Thereof! 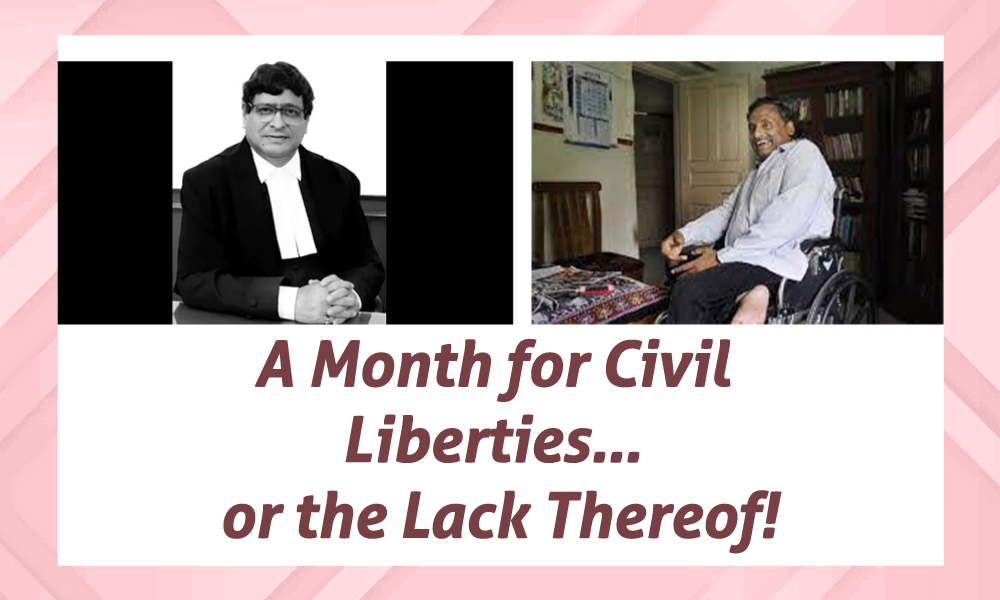 Category : LEGAL DESK
Author : Aura Staff
Split verdict on hijab brings little relief but renewed hope; Justice Dhulia’s judgement hailed for clarity and empathy
The long-awaited hijab verdict with regards to the Karnataka hijab ban arrived – but with little respite for the thousands of school and college going girls of Karnataka whose future still remains in limbo. On October 13th, 2022, a two-judge bench of Justice Hemant Gupta and Justice Sudhanshu Dhulia differed significantly on their reading of the so-called controversy. While Justice Gupta, who has now retired, reiterated the need for ‘discipline’ and uniformity in schools, Justice Dhulia asked a significant question – in a country where girls already fight against the odds to reach the gates of school, is it the job of the judiciary and state to make their lives easier, or harder, better or worse? In a lucid and empathetic judgement, Justice Dhulia differed also from his counterpart on the meaning of education, not centering it around the need for ‘discipline’, and pointed out that the Karnataka HC did not need to have entered into the debate of Essentiality of Religious Practice (ERP) in the first place. Now the matter lies with the Chief Justice of India.

Perhaps the most unnerving development in the Indian judicial arena in October 2022 was the way a flicker of justice seemed to appear for the long-suffering professor GN Saibaba (as well as former JNU student Hem Mishra, Prashant Rahi and Vijay Tirkey), and then quickly snuffed out. In a surprise judgement, the Bombay HC acquitted them on technical grounds of an invalid sanction, but upon appeal by the State, the Supreme Court held an urgent Saturday hearing, a practice not usually reserved for such cases. In a widely criticized move, they put pause on the acquittal – citing the irrelevance of his 90% disability as it was the ‘mind’ that apparently is mostly involved in cases of conspiracy. Another co-accused, Pandu Narote had earlier died of swine flu this year in jail.

More information has emerged on the release of the accused in the Bilkis Bano case, with documents revealing that not only did many of the accused spend over 1000 days on parole, their release was opposed by CBI, India’s premier investigating agency, as well as the SP. Therefore, it was the Home Ministry’s direct intervention which led to the release on grounds of ‘good behavior’, a claim which was later exposed as it emerged that one of the accused on parole even got chargesheeted for sexual harassment.

New CJI DY Chandrachud appointed, to be sworn in on 9th Nov

Justice DY Chandrachud is going to begin one of the longer tenures of CJIs in recent history, with his swearing in ceremony set to take place on November 9th, 2022. Replacing Justice UU Lalit, whose term saw a flurry of activity of long-pending cases being revived as well as establishment of many constitutional benches, Justice Chandrachud enters with a liberal legacy of landmark cases in areas such as privacy, feminist jurisprudence, free speech, personal liberty etc. However, there is also scepticism from some corners as former president of the Supreme Court Bar Association, Dushyant Dave mentioned with the future CJI’s reluctance to sometimes take a bold stand in politically sensitive matters, pointing to his disappointing stance in the Haadiya case as well as in some tax matters. It remains to be seen, in very challenging times, what the future of the judiciary holds, particularly for minorities and other marginalised sections.