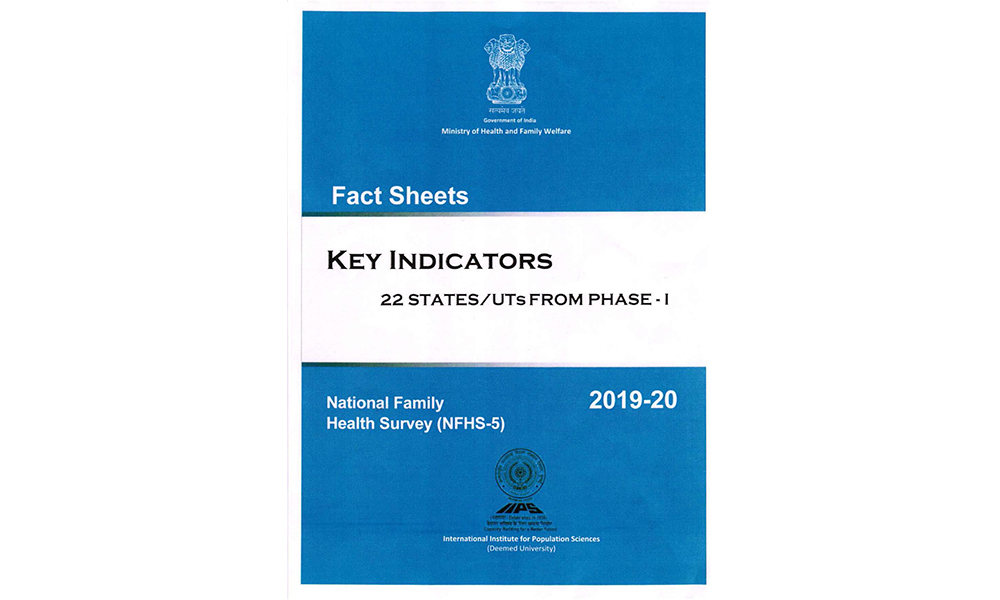 Fertility, population growth and religious groups’ indicators for this variable have been topics of furore and discussion for a while now. The latest NFHS-5 data which covers the changes in the Indian population’s health indices over the past five years paints a complex picture of this simplistic debate. As Rukmini S in her recently critically-acclaimed work, Whole Numbers and Half-Truths points out, “The average woman in 1950 had more than six children, as against the average Indian woman in 2020, who will have just 2.2 children on average.” Tracing the average Indian family’s inter-generational fertility changes even on a casual basis lends credence to this data. There are also regional variations; with all Southern states, irrespective of identity or religion, already dipping below-replacement fertility rates (this is the total fertility rate—the average number of children born per woman—at which a population exactly replaces itself from one generation to the next, without migration; amounting roughly to 2.1).

Apart from the much-discussed nuclearization of the Indian family, young couples are reproducing less, later and with a great deal of thought. The NFHS-5 data, which is also measured on religious lines, shows a dramatic fall in the much-discussed ‘Muslim fertility rate’, the myth of which has fuelled Islamophobic campaigns, crude remarks such as ‘hum paanch, hamare pachees’, ‘population explosion’, ‘baby-making factories/camps’, and even proposed population control bills. The data has scattered these myths in the wind. Muslim population growth has not only declined steeply, it has almost hit replacement levels of fertility.

As the former CEC, SY Qureshi, author of a popular book on population growth has argued, it is education, incomes, delivery of services and other such factors that primarily affect fertility and reproductive choice-making in India, not religion. For a woman to exercise her reproductive choice freely, many factors come into play. The existing homogeneous discourse that Muslim women are controlled by their religion or their spouses to produce children without any agency over their own selves or decision making holds no water in the current situation. But the situation is not as rosy as the data would have you believe. If some health experts are to be believed, a continuous push towards population control, including coercive measures or disincentivization against larger families (such as two-child laws for contesting local elections) is leading us straight into a Japan-like crisis – an ageig population and declining potential for human capital.

Fertility politics – especially around the Muslim fertility rate has dominated the discourse around population growth in India for the past several decades. But beyond that, it is now well-known that the global push to have fewer children, control population excessively, and attribute all problems ranging from climate change to poverty to the human population is erroneous, based in Malthusian economics and the darker histories of eugenics. Even in Indian schools, it has been drilled into students’ heads that it is purely due to overpopulation that India remains a poor country. While in reality, it is now known that the reasons behind many of India’s socio-economic concerns is the accumulation of wealth in few hands, which is celebrated in the name of ‘Indian billionaires’. While Indian youth is led to uncritically consume and idolize the wealthiest upper strata of Indian society as the ‘dream’ to achieve, they are also taught to elide over what such wealth means in an already unequal society. Instead, the ills of Indian society are apparently a product of illiterate, poor, over-reproducing lower-class citizens, who are also always assumed to be Muslims. The limited permission for polygyny in Islamic shariah is also seen as a method for increased child-birth, while in reality, polgyny has very different origins and reasons behind its permissibility, including the care of unmarried widows or divorcees who would otherwise never find a suitable partner, especially in societies with biases against such women.

There are also many misconceptions around Muslims and fertility – ranging from the medical, that Muslims are theologically forbidden to use or are practically unwilling to use birth control and contraceptive measures entirely (which contraceptive-use data has revealed to be untrue) to the more vile, that Muslims are deliberately producing more children to engage in jihad or to change the demographic situation altogether. But let’s leave the Muslim debate behind for a while, because the recent NFHS-5 data shows that such debates, are for all practical purposes, entirely moot. Muslims, like all other communities, when given access to education, literacy and awareness are anyway moving towards replacement fertility rates. But is this, beyond the din and celebration, unquestionably a good thing?


As journalist Rohit Saran notes, while there is much to celebrate over stabilizing population trends, including maternal health indices, there is a mixed bag when it comes to the once-celebrated demographic dividend. There will be a contraction of the labour force, and an ageing population to look after and ensure welfare for, a sphere that the current Indian government has not shown much attention towards or spent funds on.

Secondly, as many other experts have pointed out, while a push towards lower population rates has always been justified in the name of gender justice and women’s health, women’s health indices are actually not improving as quickly as they should; in many cases, due to rampant inflation, poverty, lack of public healthcare and declining investment in free and accessible education, women are actually worse off. So, how much have women actually benefited?
The third and most alarming data is that of the sex ratio. As Rukmini S also notes, declining fertility rates and ‘boy preference’ also go hand in hand. There is evidence to show that “fewer children means even fewer girls”, as she notes in her book. When fertility declines, an absolute preference for boy children also increases. Dr P Arokiasamy, a demographer points out that “this can be through sex-selective abortion, or the ‘stopping principle’, where families stop having children as soon as they’ve had a boy.” Even states like Tamil Nadu and Kerala, otherwise excellent on the development and social indices scale, have seen their sex ratios plummet. The only state in India to have clear girl preference is Meghalaya. Poonam Muttreja in Down to Earth posits the two main focus areas that will have to be addressed in light of the current fertility data: “The twin challenges of rising young population and old age dependents (by 2050, every fifth Indian will be an elderly person) will need investments in employment opportunities, education, health and geriatric care.” While the Indian government and many BJP ruled state governments seem keen on illegal, unconstitutional population control bills and measures, there is no such simultaneous interest in ensuring that the next chapter in India’s population growth actually addresses the needs of a changing population.

One thing that is clear is that India’s demographic future, if further worsened by such coercive measures and disincentives to having children, will look similar to some ageing societies like Japan where we find senior citizens working well into the periods of their lives when they should be resting, and even China, which is now facing the repercussions of its two-child formula. Instead of addressing the real reasons for poverty and poor social indices, the Indian government has, in the past many decades, harped up the discourse of ‘over-population’, which in itself is a myth of epic proportions.