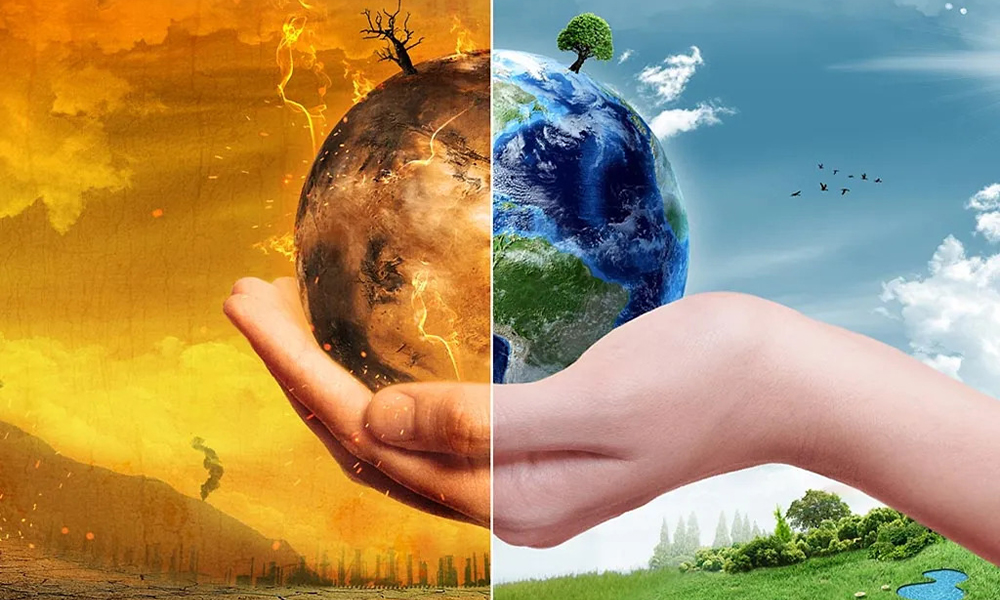 Almost daily we see in the news that somewhere there is a severe drought limiting the life of people on earth, heavy floods devastating the cities and villages, and continuously increasing heat and temperature, leaving the world in danger. A question arises: why is this happening? The answer is in two words i.e., “Climate Change.” But who is responsible for this changing climate? Is it the action of God or the human activities responsible for it? Normally people think that all the changes in climate and atmosphere are natural and humans don’t have any interference in it, but according to the United Nations, after the 18th-century, the major reasons for climate change are human activities.
IPCC Report:

Climate change is the most severe crisis of human history because it is the root cause of many other big crises. It is not only an environmental concern but has also emerged as the biggest development challenge for the planet. Its economic impacts, particularly on the poor, make it a major governance issue as well. The facts and data revealed in the report, recently released by the Intergovernmental Panel for Climate Change (IPCC) left the world in despair and perplexity about global climate change. The report “Climate Change 2022: Impacts, Adaptation, and Vulnerability” is prepared by Working Group II of the IPCC. This is the organization’s sixth report, which has some unique qualities compared to the previous reports. It talks about the regional and sectoral impacts of climate change. It has assessed the risk and vulnerabilities of, mega-cities around the world and looked at the health impacts of climate change and pointed out how climate change will create economic problems in many countries of the world. According to the report, the heat waves, drought, and other extreme weather will be the new normal in different parts, including Asia. Before understanding the impacts and effects of climate change, let’s try to understand what is climate change.

What is Climate Change?

In short, the long-term changes in temperature and atmosphere can be defined as climate change. The earth’s temperature rises over time due to global warming and it results in heavy rainfall and severe droughts, including heatwaves and cyclones. When a huge amount of carbon gasses such as Carbon Dioxide, Methane, and Chloro-Fluorocarbon are emitted into the atmosphere by burning fossil fuels like coal, oil, and gasses in factories and industries and through the vehicles, it creates the greenhouse effect in which carbon gasses made a sheet around the earth in the atmosphere which attracts excessive heat from the sun and it causes global warming.


The burning of fossil fuels at a huge level is the primary reason for global warming. The burning of coal, oil, and gas in the factories and industries and through the use of vehicles generates and emits greenhouse gasses in the atmosphere.


Deforestation has a big role in climate change. Trees help improve the climate by absorbing CO2 from the atmosphere. When they are cut down, this natural benefit is lost and the carbon stored in the trees is released into the atmosphere.


Greenhouse and toxic gases including methane are released into the atmosphere, soil, and waterways when landfills and incineration have done for waste management. It contributes to the greenhouse effect.


Modern life is highly dependent on the mining and metallurgical industry. Metals and minerals are the raw materials used in the construction, transportation, and manufacturing of goods. From extraction to delivery, this market accounts for 5% of all greenhouse gas emissions.


Overconsumption is also responsible for overexploitation of natural resources and emissions from international freight transport. It also plays a sizable role in climate change and global warming.


According to various estimates including of IPCC, these man-made disasters will displace 250 million people by 2050 and push millions of people into extreme poverty worldwide. It has already disturbed the social, economic, and geopolitical balance in many parts of the world. As mentioned in the report, there are more chances of an increase in vector-borne and waterborne diseases in Asia, and mortality and virulence will also be increased. It creates new governance challenges


The increasing temperature modifies the conditions and cycles of plant reproductions. The scarcity of resources is changing the life habits and migratory cycles of animals. The worst effect on biodiversity is the disappearance of many species including endemic species, or conversely, the intrusion of harmful species that threaten crops and other animals.


Melting of ice in Antarctica and massively at poles and rising sea level threaten the lives of millions of people worldwide. In a century, the increase reached 18 cm (including 6 cm in the last 20 years). The worst-case scenario is a rise of up to 1m by 2100. IPCC report clearly said that Mumbai has a chance to be underwater by 2050.

It was lambasted that India was the third-highest polluter in the world but its scale of emissions is low compared with the top polluters of the world. China stood first with 10.6 gigatons (Gt) followed by the US with 5 Gt and India’s emission scale at just 2.88 CO2 gigatons. But still, we need a huge growth in the economy to meet future electricity demands and to create new and renewable energy sources; as of today, millions of Indians don’t have access to electricity.

Becoming a net-zero carbon emission country by 2070 is a bigger challenge but India is ready for it In November 2021 at the 26th Conference of Parties (CoP26) in Glasgow the Prime Minister shared ‘Panchamrita’ a five-fold strategy to realize this feat. The strategy is as follows:

According to the ministry of commerce and industry, the Energy sector in India includes conventional power, renewable energy (RE), petroleum, and natural gas. The total energy capacity in India stands at 356 GW with major contributors being Thermal (66%), Renewable (22%), Hydro (13%), and Nuclear (2%). India’s power requirement in 2030 is projected to be 2,518 BU and if we target to meet 50 per cent of our requirements from renewables, then the installed capacity will have to increase from the planned 450 GW to 700 GW.
According to the Central Electricity Authority (CEA), India’s coal capacity will be 266 GW by 2030 — which is an addition of 38 GW (which is rough and is under construction currently). This means India has stated that it will not invest in new coal beyond this. India’s energy transition investment is $14B which is 1.9% of the world’s total. India’s investment is very low compared to the top investors, but the growth is good and India is on its path.
Climate Change as an opportunity:


Despite climate change being a challenge or a threat, it is an opportunity for both developed and developing countries. The struggle for becoming a net-zero carbon country will invite big investments in new and renewable energy industries like wind, solar, and hydropower industries. It will create millions of jobs across the world. The International Finance Corporation Report (IFC) says, “During the next decade, green buildings represent a significant low-carbon investment opportunity in emerging markets—$24.7 trillion by 2030.” It is an emerging market at a fast pace. More green infrastructure will be required to meet the future demands of the population. Meeting the demand for new buildings through green construction can spur low-carbon economic growth and create skilled jobs in emerging markets for decades to come. According to IFC analysis, efforts to control changing climate will promote big investments in these six key sectors: waste, renewable energy, public transportation, water, electric vehicles, and green buildings. All these sectors need greater reforms to meet future demands and reforms require innovation and creativity. This will also be the reason for massive job creation worldwide.


“Whilst we were with the Messenger of Allah ﷺ rain fell upon us. The Messenger then exposed part of his garment so that rain fell on his body. When we asked him why he did so, he replied “Because it has just come from the Exalted Lord”. Sahih Muslim


Whenever Allah’s Apostle saw the rain, he used to say, “O Allah! Let it be a strong fruitful rain.”


Whenever a strong wind blew, anxiety appeared on the face of the Prophet (fearing that wind might be a sign of Allah’s wrath).

He (peace be upon him) also used to say: “We are given rain by Allah’s mercy, Allah’s providence, and Allah’s grace.” (Bukhari)