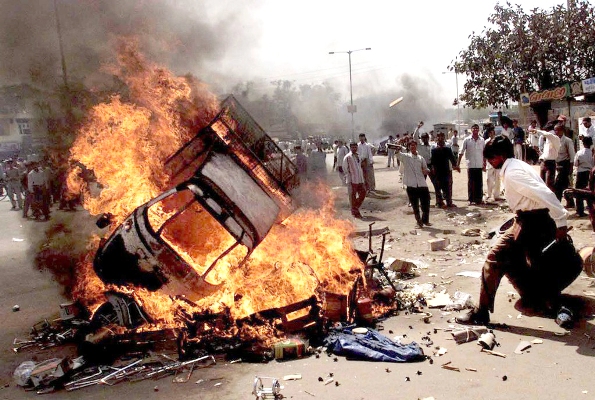 I looked into my welled-up eyes in the mirror, my mind scanning the telephonic conversation that has chilled me to my last bone. Thoroughly impressed by the amount of grit owned by an old shaky voice, I grappled with my emotions. Painkillers don’t work on all headaches. Not on one that emerged with images of horror-stricken faces that were robbed of true smiles, perhaps forever.

Not until I spoke to Jamila aapa, a survivor of the Gujarat pogrom 2002, did I realise the myriad intricacies of what we casually classify as tragedy. No amount of sympathy can comprehend, let alone compensate for such nightmares which are passed on generation after generation.

What is particularly intriguing about volatile situations is the predicament of the female gender. Even if the incident is broadly against humanity, it often zeroes down on female targets in the process of gendered violence. Women’s honour and modesty often becomes the target in order to exact revenge on the entire community. Gendered sexual violence is therefore a constant in all changing versions of hatred and violence. Wars all over the world are fought through women, with rape filling in as a powerful weapon of war, and a war tactic to create fear. Be it the partition, the Gujarat and Delhi pogroms etc. at home or the Beijing rape and Rwanda and Rohingya genocides overseas, similar patterns can be observed. An estimated 2,50,000 women were raped in Rwanda, producing up to 20,000 babies and as testified by the UN, girls as young as seven were tied by their hair and hands to the trees and gang-raped in Rakhine State.

“19 years,” pronounced Jamila aapa, when I asked her what two decades of co-existing with trauma meant. An eye-witness, she recalled the horror with precision. It left me wondering: how much time does healing take? Is the return to ‘normalcy’ just a façade? The actual excesses stop, the repercussions just don’t. Widowhood, unwanted pregnancies, infanticide, depression, stigma, ostracization etc are not bound by any timeframe, and I thought feeling miserable for a few weeks was enough to condone such incidents. Closing my eyes to any unpleasant event or pretending that things aren’t murkier does not wipe it off. Does it?

If it wasn’t for a strange stroke of fate, she along with so many women wouldn’t have survived the fear and the panic, the shrieks and the silence. The rapes of fellow women, the chopping of their breasts, the burning alive of their men and houses. The barbarism unleashed could still after all these years, not be believed.

Are the women angry, revengeful or just devastated? Any suicidal thoughts? What did it mean to shift their focus from sending children to schools to barely keeping them alive? Of cooking for their husbands and dining with them to all of a sudden grieving them. From sharing recipes and tea time gossip to becoming the sole bread earners…

Jamila spoke in a grandmotherly tone: who better than women to understand the futility of crying over spilt milk? The beauty of her gender, she reasoned, is that she simultaneously carries the burden of fear and trauma on the one hand and care on the other. When dealing with a head-on collision with uncertainty, she undergoes a metamorphosis of sorts. Even the most ordinary of women realise their own potential, the power of presence. When she becomes the main provider financially and emotionally, she cannot let grief consume her. To make her children smile through their tears, all suicidal thoughts have to be crushed. A woman lost in wilderness actually finds herself.

Such a deep perspective, I thought to myself, could only come from one who has been through the worst. Can we really pin a woman down?

Shaken, crippled, stigmatised, she collects herself, her self-esteem and with clipped wings flies to rebuild her nest straw by straw in anticipation of a spring. When they ran back naked to the relief camps, Jamila aapa recalled to prove her point, the shame the attackers intended to inflict was opposed with a resolve to never let her children go through such a nightmare. This ability of a woman to endure and not give up, sustains movements too. Chipko Movement, Independence struggle, Narmada Bachao Andolan, Shaheen Bagh are all classic examples. And each time, there is an attempt to make the world safer for the coming generations, to not make them live through a cycle of trauma.

‘Hurt’ is the word, she asserted. A whole population is deeply hurt for having their lives deemed unimportant, their hearths and homes terribly compromised. Amazed at her maturity, I reflect in hindsight on how the deliberate insensitivity displayed was not a show of power. It was cowardice, naked and cheap. The connivance of the system and half-hearted reassurance from leaders with no attempt at prosecuting the criminals further adds insult to injury. The wound will remain open till any remorse or apology finds their way to them. How devoid of love and goodness they must be to strike with such monstrosity.

Thus, in trying to scare, pogroms actually awaken people to the need for peace. Fence-sitters, whose inaction emboldens the criminals, have a lot to account for. The grief of the survivors cannot be erased but can certainly be shared. It is not a weak hand we hold when we reach out to them but instead clasp onto a survivor’s fist, committed to love more than anybody else. The relief work continuously carried out by women like Jamila aapa, a septuagenarian, going from basti to basti offering consolation and counselling, helping to rebuild lives in the smallest possible way, puts my inaction to shame. It took three phone calls to start a conversation with her. I had to track her down from one meeting to the other, where she was arranging for sewing machines, school fees, settling family disputes. The chat was worth the wait because it educated me more than my formal schooling. No excuse can acquit me for not reaching out…with just flowers or a small donation…or even old books and clothes…or a silent prayer in the middle of the night. We need a reminder – though hatred burns more than just flesh, love douses it.

Every victim and survivor is a chapter on determination and commitment, declaring that they could not be crushed. Human spirit has a strange reflex – it bounces higher at every intimidation. Neither can lathis break it nor fire burn it, because pressure creates diamonds and fire refines gold.