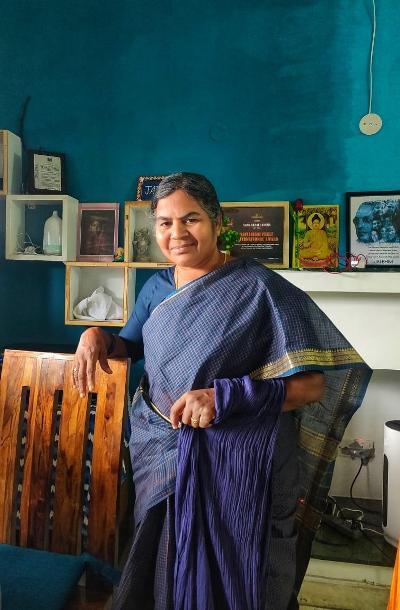 A series where we meet and speak to those mothers who have been fighting for their loved ones – sons and daughters who have experienced institutional discrimination, state repression, and injustice. Instead of romanticizing their fight, here, they speak for themselves – and their hopes and dreams, and what keeps them going.

The following interview was conducted with Radhika Vemula, activist and mother of the research scholar Rohith Vemula, who was institutionally murdered in 2016, in the University of Hyderabad. The interview was recorded by Adv Raja Vemula and facilitated by Arpita Jaya.

Q. It has been over five years since you lost Rohith in a case of institutional discrimination. How do you trace your own journey, as a woman and a mother and an activist since that time?

A. My journey will continue until I get justice. Discrimination is prevailing in several forms all over India. I feel my son, Rohith, paved a way for me to fight and overcome all such discrimination. And my journey will continue to keep that fight alive. It is immaterial whether I am a woman, a mother or an activist… the only fuel which really make me move is nothing but Dr Ambedkar’s ideology within the discipline of Buddhism.

Q. Most women in our society are denied access to education. This makes them vulnerable, adding to their existing problems of domestic violence, discrimination and societal practices which treat women as inferior. How do you think as a society, we should tackle these issues?

A. All these issues will be ended only after Ambedkarism becomes a norm and is truly infused into all aspects of this land. We should teach Ambedkarite consciousness to all these people, and bring a real democratic form of government.

Q. In recent times we have seen many mothers come to the fore to fight for rights – you, Najeeb’s mother Fatima Nafees, and many more who are not even known. Do you think mothers have a unique empathy and sensitivity to not just fight for their own but also for the issues of others?

A. Mothers have to fight back for this nation, otherwise several other mothers’ lives will turn sorrowful. There is no alternative except to fight for justice.

Q. In the course of your journey, you have met many students and children who have joined with you in your fight and call you Amma as well, look up to you and learn from you. Through our magazine, what advice would you give them for their futures and how they should progress?

A. Whatever I feel today is because of Rohith. My advice is to fight for everything whatever it may be, without any loss of life. Nowadays, the students have the facility to read rigorously. That is very essential for all our students in order to change society. That’s why, one of the important advice of Dr. Ambedkar was to get educated. I too suggest the same to all the students.

Q. We always say that children learn from their mothers. But you had a wonderful fighter of a son, and your other children too are inspirational and doing good in society. Are there things you have learnt from them?

A. I learnt so many things from Rohith when he was alive, he taught me a great deal but at that time I was not so conscious. Now, I’m not like that. I’m conscious to learn everything, not only from my children but also from society. At last, one day I would like to see that all the mothers of this nation would create a real democracy. I would stand for that till my last breath.