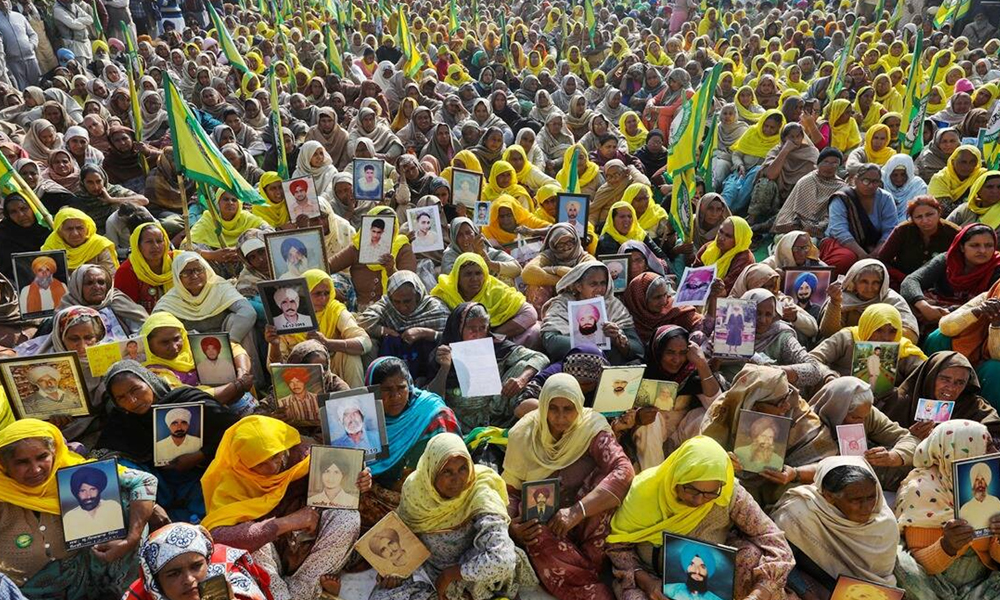 (This article was first published in Radiance Viewsweekly, Vol LIX, No 19)

Kisan Sansad, part of Farmers Movement against
3 Agri Laws, at a Glance

1. Farmers have been holding ‘Kisan Sansad’ at Jantar Mantar in New Delhi since July 22, 2021.
2. Thousands of farmers led by the Samyukt Kisan Morcha (SKM) (a collective of over 40 farmers unions) have been agitating against the three “pro-corporate” farm laws at Singhu, Tikri and Ghazipur borders since November 26 last year.
3. The laws farmers are protesting are
i.The Farmers’ Produce Trade and Commerce (Promotion and Facilitation)
Act, 2020;
ii.The Farmers (Empowerment and Protection) Agreement on Price Assurance and Farms                  Services Act 2020; and
iii.The Essential Commodities (Amendment) Act, 2020.
4. Over 10 rounds of talks with the government have not yielded any result.
5. The Kisan Sansad moved a ‘No Confidence Motion’ (NCM) against the Modi Government on August 6, 2021. The Motion was based on the fact that the farmers’ demands were not being met, despite more than eight months of peaceful protests by lakhs of farmers across the country.
6. An all-women ‘Kisan Sansad’ was also held on July 26.
7. Children ran a ‘mini-Kisan Sansad’ at the dry port of Adani, the protest site at Kila Raipur in Ludhiana district of Punjab on July 24.
8. ‘Kisan Sansad’ raised numerous issues concerning their livelihoods and violation of democratic values and basic human rights.
9. It also raised several other issues, including hike in fuel prices, unprepared healthcare system, spying on citizens, serious human rights violations in the name of sedition and other archaic, untenable charges on democracy defenders in the country.
10. Farmers have marked August 15 as Kisan Mazdoor Azaadi Sangram Diwas.

Abdul Bari Masoud delves deep into the nitty-gritty of the farmers’ movement as ‘Kisan Sansad’ is going on as well as the impact it is leaving on the nation’s conscience.

It is August 6, the 12th Day of the ‘Kisan Sansad’ (Farmers’ Parliament) running at Jantar Mantar in New Delhi in a very disciplined and organised manner. The Kisan Sansad moved a ‘No Confidence Motion’ (NCM) against the Modi Government.

As usual, 200 Kisan Parliamentarians joined today’s proceedings at Jantar Mantar, about 3 kms away from the building of the Federal Legislature, where the monsoon session is underway.
This is the world’s first ‘parliament’ that is functioning within barricades and under tight security. It was started on July 22 by farmers who have been agitating against the three “pro-corporate” farm laws since November 26 last year.

The Motion was based on the fact that the farmers’ demands were not being met, despite more than eight months of peaceful protests by lakhs of farmers across the country, in addition to several anti-farmer measures by the government.

It underscored that the Modi government had created a hoax of doubling farmers’ incomes and had done nothing concrete towards this. It also mentioned that the BJP and the Prime Minister Narendra Modi have reneged on their MSP related promises time and time again, including on making a C2+50% MSP a reality for all farmers. The government also cheated farmers on the much-hyped Pradhan Mantri Fasal Bima Yojana, where the government expenditure increased, farmers coverage decreased and corporations profiteered. On the import-export front, India’s exports have declined while imports have increased, narrowing the gap between both. When it comes to government support to farmers during natural calamities, it has been a massive failure.

During the debate, Kisan Parliamentarians raised numerous issues concerning their livelihoods and violation of democratic values and basic human rights, while participating in the debate. Several issues of serious concern of ordinary citizens were also raised, including hike in fuel prices, unprepared healthcare system, etc.

Kisan representatives also said the unconscionable spying on citizens and elected leaders by the government put Indian democracy into jeopardy. They also highlighted the serious human rights violations in the name of sedition and other archaic, untenable charges on democracy defenders in the country.

Around 200 farmers have been camping at the Jantar Mantar for the ‘Kisan Sansad’ since July 22, when the Monsoon Session of Parliament began. This is an extension of the months-long agitation that they have been holding along the borders of Delhi seeking a repeal of three contentious farm laws.

The raison d’être for organising the ‘Farmers’ parliament’ is quite obvious as stated by the Kisan leaders that farmers had written to all MPs to raise their demands, but the Parliament was not taking up their issues. It will go on till the Parliament is in session.
Explaining the need for the ‘Kisan Sansad’, farmer leader from Punjab, Dr Darshan Pal told Radiance that a section of media has been reporting that the farmers’ agitation was dying and we want to prove them wrong.

Speaking with Radiance, All India Kisan Sabha general secretary and former MP Hannan Mollah said there was uproar in Parliament over the agri laws which were passed without any discussion in Parliament.

At the ‘Kisan Sansad’, we discussed these black laws and rejected them. We are fighting against these laws since they were passed by the Modi government, he added.

It is to recall that thousands of farmers from across the country have been agitating at three Delhi border points – Singhu, Tikri and Ghazipur – against these laws which they claim will do away with the minimum support price system, leaving them at the mercy of big corporate houses. These laws are The Farmers’ Produce Trade and Commerce (Promotion and Facilitation) Act, 2020; The Farmers (Empowerment and Protection) Agreement on Price Assurance and Farms Services Act 2020 and the Essential Commodities (Amendment) Act, 2020.

The Samyukt Kisan Morcha (SKM) (a collective of over 40 farmers unions) is spreading the movement. Over 10 rounds of talks with the government have not yielded any result.
While condemning the stubborn attitude of the government, Dr Darshan Pal said that the idea behind organising the ‘Kisan Sansad’ was to demonstrate that farmers’ movement is still alive and tell the present regime that they too know how to run the Parliament.
Referring to the Republic Day incident, another leader T Shanmughan said the farmers this time decided to make the gathering small as, “Neither we nor the government were comfortable with large gathering.”

There are three sessions of the ‘Kisan Sansad’. Six members have been selected to work as speaker and deputy speaker for the three sessions. In the first session, farmer leaders Hannan Mollah and Manjeet Singh were selected for the job.

“The members who want to speak are giving their names to the speaker and the deputy speaker. There will be lunch and tea-break and we have everything with us,” Shanmughan added. We have also invited eminent economists and other experts as “Guests of the House” in the coming days, to enrich the already-rich proceedings, he further said.

Besides, an all-women ‘Kisan Sansad’ was also held on July 26.

“For the first time, women have independently run the parliament,” said one of the women protesters.

Questioning the Parliament on the recent laws, Darshan Kaur told Radiance, “Our blood and sweat is not for you to waste, but it is for the development of the nation.”

However, the government made a claim in the current session of the Parliament that it has made various efforts to end the protests. Responding to this, SKM said the BJP, both in the Union Government and in different states, has indeed made numerous efforts to end the protests, to slap false cases on leaders, to put them behind bars, to cut off supplies to the protest sites and to put barricades around the morchas and so on.

What is more shameful and regrettable is that the government is saying that it does not have any record of the number of agitating farmers who have died during the movement, it added. In this movement, more than 537 farmers have died until 10th July 2021.

Bharatiya Kisan Union leader Rakesh Tikait warned political parties, saying those sitting in Parliament – be it opposition leaders or those in the government, if they don’t raise our issues, we will raise our voice against them in their constituencies.

In a show of solidarity with the protesting farmers, opposition leaders joined ‘Kisan Sansad’. They expressed their support to their agitation and took part in the ongoing ‘Kisan Sansad’. This was the first organised visit of Opposition leaders to the farmers’ protest site who have been trying to raise the matter in Parliament. They watched and listened to the proceedings of the Kisan Sansad in a specially arranged Visitors’ Gallery in the ‘Kisan Sansad’. Among those present at the venue were Congress leaders Rahul Gandhi, Mallikarjun Kharge and Shiv Sena MP Sanjay Raut.

The Trinomial Congress, Bahujan Samaj Party and Aam Aadmi Party absence was conspicuous.
Addressing the media at the venue, Congress leader Rahul Gandhi said all opposition parties have gathered “here (Jantar Mantar) to extend their support (to) the farmers against the ‘Kala qanoon’ (black laws)”.

“We want a discussion over Pegasus, but they (government) are not letting it happen. Modi has intercepted every Indian’s phone,” he further said.

Meanwhile, ruling BJP is facing the ire of farmers in several states. Black flag protests and social boycotts of BJP leaders are now spreading to Uttar Pradesh, after Punjab, Haryana and Rajasthan. A large group of farmers gathered to resist a local event in Pilibhit in which a BJP Minister Swami Prasad Maurya was to participate. Police detained the protestors in a local gurudwara after coming to know about this. There was a protest against BJP leader Babita Phogat in Charkhi Dadri in Haryana.

An SKM leader alleged that BJP has a nefarious plan to instigate farmers under the guise of ‘Tiranga Yatra’ but it was foiled by the farmers.

An audio tape has surfaced which shows that the BJP is offering `2000 to mobilise supporters for the Yatra, which has, for all intents and purposes, failed. It is also noteworthy that mini-Kisan Sansads are being organised at other places too. At the dry port of Adani, the protest site at Kila Raipur in Ludhiana district of Punjab, children ran a Kisan Sansad on July 24.

More farmers are reaching the Morchas as preparations are underway for August 15 being marked as Kisan Mazdoor Azaadi Sangram Diwas. August 9 will be a special day in the Kisan Sansad – it will be a Mahila Kisan Sansad that day. It is also Quit India Day, and the main slogan in the farmers’ movement is “Modi Gaddi Chhodo, Corporates Bharat Chhodo”.

Farmers leaders said they would like Parliamentarians to note that millions and millions of farmers are watching the MPs in action carefully, and are taking note of whether the People’s Whip is being followed or not.

If this momentum against BJP remains intact, it may affect the electoral prospects of the BJP in the next year’s assembly elections of UP, Uttarakhand and Punjab.