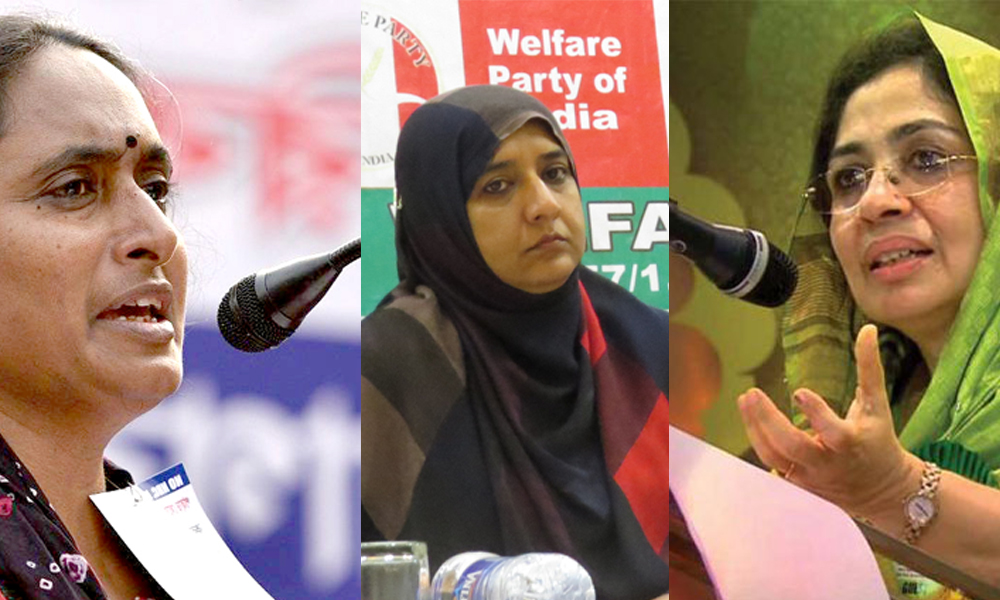 Words like equality, freedom and liberty have become incredibly clichéd and are constantly being reinforced by media and society alike. However, the great profundity of these words is a far cry from how they are being publicized. Women’s equality and freedom seem to be buzzwords. But are women really free today?

A working mother is either frowned upon by society, or in many cases where she is supported, she nevertheless feels the anxiety and pressure of not doing ‘enough’. Amidst the burden of being able to keep up with burgeoning responsibilities and the tag of ‘women’s equality’, the modern woman is suffering more than ever.

Massive words like justice, equality and democracy are too profound for the society to truly understand. In reality, the Indian woman of today is hoisting a tattered tricolour which symbolises her incomplete victory.

In this light, Aura asked some political leaders to give their responses on what it means for women to be truly free, more than 75 years after independence. Here are their responses:

The most recent National Family Health Survey shows us that even 73 years after India’s independence, most women in India do not enjoy the most basic freedoms – to take a walk, to visit a market, to spend time with friends, to love, live with, or marry someone of their choice – without the “permission” of some patriarchal authority figure. This is the case even where women enjoy some degree of social, economic, and educational development.

In the past few years, the political establishment under the BJP has dropped even the pretence of fighting this basic lack of freedom – instead they are valorising women’s lack of freedom as “Indian culture”, attacking feminists who advocate autonomy as “anti-national”, and enacting laws (such as those claiming to curb “love jihad”) which give legal teeth to patriarchal violence against women’s autonomy.

We are on the verge of celebrating another Independence Day. The Constitution of India is enormous and comprehensive. Even though India is a developing country, there has been immense progress in various fields. Significant progress has been made financially, socially and culturally, and in the fields of education and employment. While India has a lot of progress to its credit, there is something that we need to seriously ponder upon: the status of women in India at present.

Even to this day, the position of women is pathetic. We can see that the situation in some states like Kerala is a little better. But analysing India altogether, we see that women are backward educationally, health-wise, in terms of employment opportunities and every other field. Many legislations have been passed in this regard by the parliament. The Equal Wages Act was passed to protect the interest of women. The Hindu Marriage Act of 1955 gives equal rights of divorce and remarriage to women. It protects women from polygamy, polyandry and child marriage.According to the Hindu Succession Act of 1966, Hindu women have rights and claims over their parents’ property. Then came the Hindu Adoption and Maintenance Act, which provides childless women the right to adopt a child and divorced women to claim maintenance from her husband. Thus, if we analyse various laws in India, many of them are framed to avoid gender discrimination. In spite of all these laws, if women are in such a pitiable condition even now, then we need to introspect about the reasons for this condition.

If we take a glance at a woman’s life right from her birth to her death, brutality against her starts right from her mother’s womb. We live in a country where female foetuses are terminated right after the gender is revealed. This sometimes happens due to pressure from the men in the family or astonishingly even carried out by women themselves. Further, when the girl child starts her schooling, she is harassed in school for many reasons and sometimes inside the closed doors of her home too. She is sexually molested, harassed in a barbaric way and sometimes even murdered. Later, when she starts her college education, she faces harassment, physical and sexual abuse all over again. When it comes to the marriage of a girl, her choices are not considered. She is pushed into marriage by her parents and other relatives. There is often a demand for hefty dowry as a price tag attached to her. This dowry system is prevalent in all people irrespective of their social stature. Women’s self-esteem is destroyed at all levels. After marriage, she becomes a victim of the atrocities of her in-laws. Besides, in the area of employment, she is denied equal wages and is discriminated against in any position she holds.

We have not fallen short of laws and regulations. Prenatal diagnosis to determine the gender of the child is an offense in India. There is the POCSO Act to prevent child abuse. The Dowry Prohibition Act of 1961, Domestic Violence Act of 2005 and Harassment of Women at the Workplace Act form a set of laws that are meant to be in the interest of women. But the question to ponder upon is that are women really benefiting from all these laws? The accused are somehow escaping from the hands of law and that is why offenses are rampant. If the perpetrators are to be punished, thorough investigation is needed.

Today, violence against women is in its peak, discrimination at workplaces is prevalent, the mind-set of our society actually needs a change. While I see men indulging in domestic violence, I often ask this question: how could he violate another woman when he himself has a mother or sister in his life. When he cannot respect another woman, then he doesn’t respect any woman in his life. Doesn’t he need to change his attitude towards them? Mahatma Gandhi had once said that India’s soul lives in its villages. Are the women of our villages aware of their plight? Are they aware of their legitimate rights? Do they know that the law has ensured their personal, social and employment rights? Are they ever taught about it? We need to contemplate all these questions.

Do we know how many women are part of the decision making bodies of our country? On the political front, is there women representation in policy-making bodies? On this occasion, I remember our Prime Minister Rajiv Gandhi. He brought the Panchayati Raj Act and secured 1/3rd reservation to women, so that they can be brought into the mainstream. In spite of all these, women are like bonsai plants whose growth is forcefully limited.

I urge that all women of the country should pass a resolution to ensure 1/3rd reservation of women in the Indian parliament and legislative assemblies. We have so many educated women amongst us. The Almighty has bestowed them with so many abilities. Yet, society is not ready to give them the opportunities they deserve.

We have to work hard so that women in India can become independent, safe, enjoy equal opportunities and be proud of their status. On this Independence Day, let us join hands to bring this resolution.

Women empowerment is a debatable issue in India.

The principle of gender equality is enshrined in the Indian Constitution in its Preamble, Fundamental Rights, Fundamental Duties and Directive Principles where the Constitution not only grants equality to women, but also empowers the State to adopt measures of positive discrimination in favour of women.

But in reality women empowerment in India has a long way to go. We do have some classic examples of Indian women who have excelled in their respective fields, but they are few.
Women empowerment in terms of equality and freedom is possible only when women are involved in policy making and decision making. The bill which ensures 33% of reservation for women in the parliament has been pending for decades. This speaks volumes about how women’s participation is checked.

As seen in the NCRB data, the crime rate against women is increasing, despite the fact that there is no dearth of laws in the country. A misogynist attitude still prevails in the country, which cannot tolerate equal participation of women, even 75 years after independence.

There is a dire need for a private space in the public domain for women to exhibit their full potential without the fear of being suppressed and subjugated. One ray of hope is seen in the younger generation making efforts to reduce this disparity by giving equal opportunities and challenging the age-old practices of discrimination.