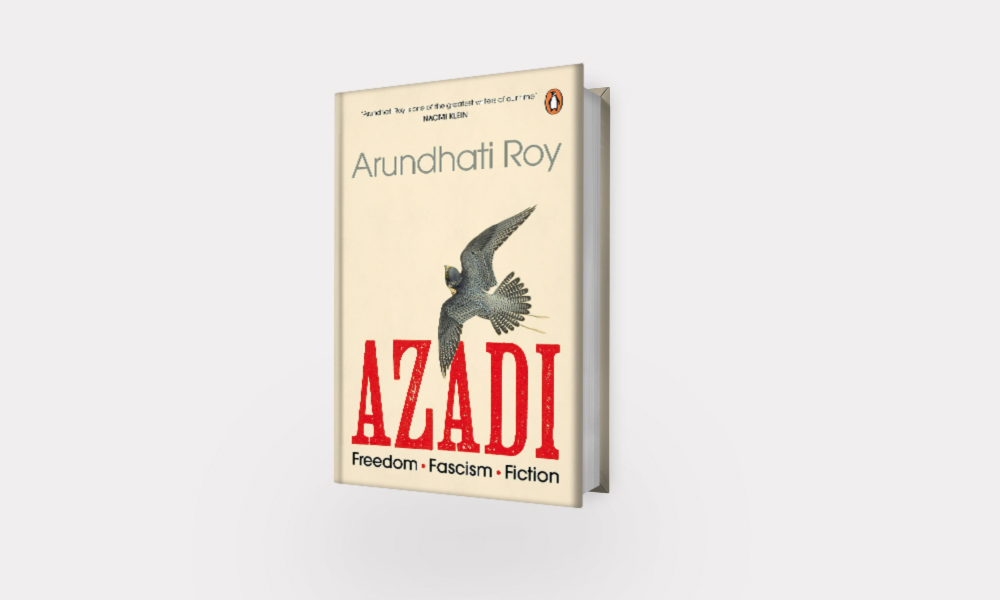 “ Does a country fall into fascism the way a person falls in love? Or, more accurately, in hate?”

Azadi-آزادی- a word, a feeling, a gesture, an intimate emotion, a soul of revolution, unbounded by language, unconfined by power, a cry of the oppressed and a nightmare for oppressor. The diverse meanings of the word – as expressed by different individuals – cannot fully be comprehended but can be encapsulated in that one cry.

What does the word ‘freedom’ represent and what it means to you? This is the question Arundhati Roy seeks to answer in her latest book ‘Azadi’, an anthology of articles written and lectures delivered by her between 2018 and 2020, a bleak period for Indian democracy in general. As she assesses the broken and damaged situation of India with a hope to mend it, the book articulates the dangerous events that have taken place in this speedy growth of majoritarianism and fanaticism.

When talking about ‘India’, it is nearly impossible to encompass the diversity of languages, ethnicities and cultures in a single nation. The question that has lately emerged in the ‘new’ India is: what makes you Indian and who gets to decide this? In an allegedly ‘secular’ country, Hindu nationalism in the form of Hindutva agenda is escalating and unfurling its true motives. This has been a work-in-progress throughout the 20th century. Minorities (especially the Muslim community) have been deeply threatened by the current government that has been in power since 2014, and the broader umbrella of the RSS, the foundations of which lie in ‘One Nation, One Language, One Religion’ (and so on). Already suffering from innumerable diseases like casteism, poverty, illiteracy, unemployment, gender discrimination etc, India has been pushed into the lap of fascism even further with the advent of the current ruling dispensation.

We have been bombarded with simultaneous changes such as demonetisation (which was called as a surgical strike on corruption and terror funding), introduction of new goods and services tax, Citizenship Amendment Act, demand for a new National Register of Citizens, North-East Delhi pogrom and Kashmir losing its special status through the Article 370 of the Indian Constitution. Meanwhile, the poor have got poorer and the rich have flourished, as always. Even if the middle-class has suffered, the promise of a Hindutva state and the rejection of ‘termites’ and ‘illegal immigrants’ is enough to keep their hungry bellies going – for now. One such promise that has kept the devotees of Hindutva going is the treatment of Kashmir. Seven million Kashmiris were barricaded in their homes, internet connections were cut, and their phones went dead. Roy believes that “Kashmir’s truth can only be told in fiction – because only fiction can tell about air that is so thick with fear and loss, with pride and mad courage, and unimaginable cruelty.”

As we witness the ‘sweeping simplification of fascism’, what role does the language and literature play? For Roy, it has let the blood in her veins flow more easily, literature became the only survivor and has provided her shelter. She has broken the fine line between fiction and non-fiction to unite them as one to dismantle the false political dynamics that have been unleashed for decades. The references to her novels ‘The God of Small Things’ and ‘The Ministry of Utmost Happiness’ were quite interesting to read as she enlightened the readers as to how the events unfolding in her fiction relate to reality.

It might be difficult for some readers unaware of South Asian history and politics to comprehend certain parts and it may need some research to understand in detail. For someone well versed in the subject and following India’s recent political developments, it will strengthen the idea of resistance as Roy is an unapologetically daring writer and activist and her literature fluently reflects the same. We are reminded throughout the book of the falsification of history and the ‘dunceification’ of the syllabus. Roy is afraid that this will lead to a kind of foolishness from which we will be unable to recover. All nine articles educate the readers of the historical, economic and political dynamics of India.

Every year, as we celebrate the independence of India from British regime on 15th August, a question lingers – are we really liberated? The skies full of the shrieks of ‘azadi’ filling the void of unspoken crimes, the deafening silence from the graveyards, the fire on ice and blood on flowers, the emotionless eyes of innocent children – will we be able to pull ourselves back together, ever? The list of anti-nationals keeps growing and hate spills before our blinking eyes.

While many might disagree here and might even call it a hyperbole but Roy clearly and boldly states the truth in one of her articles – “Indians who valorise their own struggle for independence from British rule and virtually worship those led it are for the most part strangely opaque to Kashmiris who are fighting for the same thing.”

As the articles were delivered at different times to different audiences, some of the lines are repeated. But besides the editing which could be sharper, the way Arundhati Roy expresses herself is exquisite. Her lyrical and profound narration keeps you hooked and gives you the literary joy of reading. Being an Indian, and observing all the events closely, it gives me a sense of relief to know that a writer like Roy represents us to the world. I insist everyone reading this review to not miss the opportunity of exploring the world through this brilliant writer’s perspective. The book ends with food for thought as the last article talks about how the pandemic turned the definition of freedom upside down and the world came to a halt. The writer thinks that it might be a portal to a new beginning, to imagine a different, another world and fight for it.