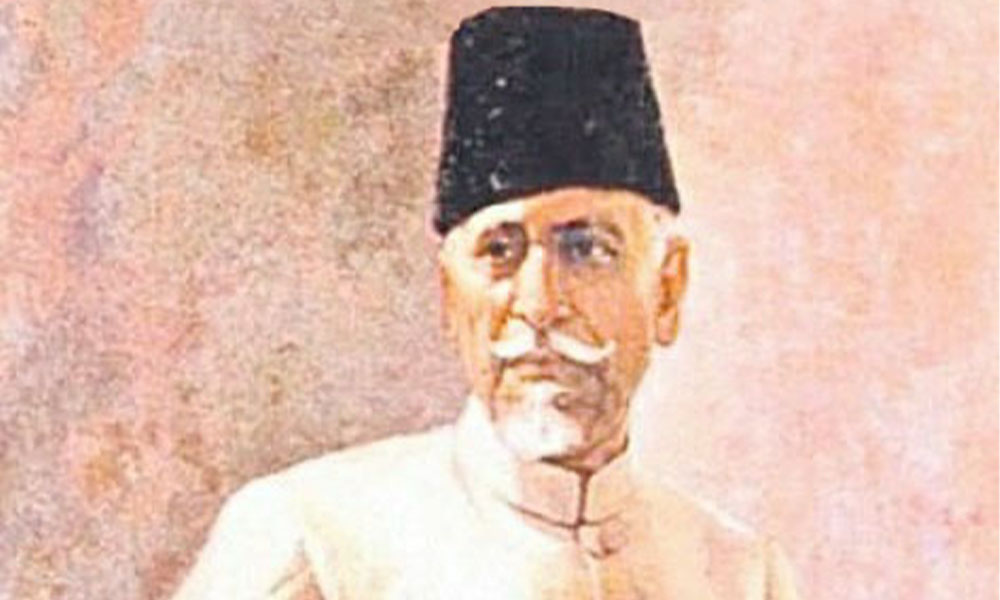 Category : Lessons from Great Personalities
Author : Maijabeen Gaihlot Chaudhary
Azad. What better pseudonym for a mind that could neither be shackled by British imperialism nor by divisive politics on his home turf. One that towered over the scepticism of his age and shone like a pole star, leading the masses from regionalism and communalism to historic freedom. Born in a century torn apart by narrow (European) nationalism, Azad advocated for a world-view that cut across physical boundaries and could not be demarcated on a map. His was the voice for universal human progress. Narrow-mindedness to him was the root evil that caused havoc like a dangerous disease in every sphere of human life, “like an actor, it masquerades in disguise.” The indomitable visionary Maulana Abul Kalam Azad envisioned India as a unified, educated and progressive entity, a dream that still begs realisation.

He was born as Abul Kalam Ghulam Muhyiddin, on Nov 11, 1888 in Mecca and moved to India when he was young. Home-schooled by reputed tutors and mostly self-taught, he went down in history as a renowned scholar and theologian, Tarjuman-ul Quran being his magnum opus. His knowledge was deep and comprehensive, encapsulating the traditional and ancient treasures of both the East and the West. His critical understanding of the modern world and movements, his mathematical approach to social issues, while being enshrined in sheer humanism, made him an institution in himself. Gandhi rated Kalam as a person of the “calibre of Plato, Aristotle and Pythagoras.”

At a young age of 14, he became well-versed in many languages and developed great literary flair, impressing contemporary scholars like Allama Shibli Nomani and Maulana Salman Nadwi. He used his pen as a weapon to attack the British and galvanise the masses. The publications he started, Al-Hilal and later Al-Balagh were instrumental in adding fervour to the ongoing freedom struggle. Through his writings, Azad instilled amongst the masses a sense of patriotism, seasoned with humanitarianism. He had the rare potential of utilising zeal ‘to make and not break’, and ‘to multiply and not divide’. At the leadership level, Azad became the connecting bridge between leaders as well a catalyst that synthesized divergent views.

Maulana Azad simultaneously championed the cause of Hindu-Muslim unity and a free India. He will always be celebrated for consolidating the increasing resistance of Muslims against the British, uniting them from the length and breadth of the country and leading them headlong into the freedom struggle, not just as a national duty but a religious one. He was instrumental in persuading Muslims to give up a demand for separate electorates and his efforts to dissuade Muslims from the formation of Pakistan were a reflection of his commitment to pan-Indian unity. Pandit Nehru aptly called him Meer-e-Karwan (The Caravan Leader). He infused both the freedom struggle and nation building effort with moral integrity and precisely for this reason, his death has left a vacuum that threatens to engulf our nation which is tragically being hijacked by polarisation and bigotry.

Visiting Azad’s legacy was, therefore, education. I was face to face with a personality that was a rare blend of deep knowledge, enviable foresight, radiant energy and passionate leadership. The beauty of Maulana’s erudition lies in him imbibing anything of value, rather than reducing it to its origins or regional affiliation. He rose above being just ‘Islamic’ or ‘Oriental’ and was deeply influenced by Ibn Khaldun, Sir Syed Ahmed Khan and Rousseau alike. He sought to imbibe from the West objectivity, scientific spirit and elevated it to the next level by drawing from India’s rich heritage of tolerance and humanism. His high intellect led Nehru to compare him with “…the great men of the Renaissance, or in a later period, of the French Revolution, men of intellect, men of action.”

Nehru nailed it. By any reckoning, Maulana Azad’s greatness lies in translating intellect into action. In the most trying of times, this erudite scholar knew no ivory tower, but led the illiterate, naïve and emotionally charged masses personally- marching through streets, delivering speeches, and going behind bars. By joining other stalwarts like Gandhi, Nehru and Patel, he was instrumental in cementing the fight for freedom to a degree from which there was no return. Dynamic and promising, he presided over the special session of the Congress in September 1923 as the youngest president, aged 35.

Education in a Fractured Post-Independence Era Political freedom not being the end of the road, he was very sensitive to the demands of a new-born nation. A strong believer in the innate goodness of man, he was deeply passionate about education as the only tool to release the dormant potential of a nation reeling under 150 years of political bondage. It isn’t surprising then, that he was chosen for the task of educating a country that was befogged with newly found freedom. The baby steps taken on this path would determine the nation’s destiny. Maulana Azad did not disappoint and proved a worthy custodian of this trust. As India’s first education minister, Maulana Azad was a beacon that could steer the nation from darkness to a bright morning. From a vast reservoir of his detailed, deep and systematic proposals, he should be specially credited for his foresight in impressing upon a young nation the power of education. He demanded that education should have the highest priority in our national budget and “should take its place immediately after food and clothing”. His commitment to empowerment of women is evident by the stress he laid on girls’ and women’s education… “No programme of national education can be appropriate if it does not give full consideration to the education and advancement of one-half of the society- that is the women. ”Maulana was for a sound system of basic education based on a universal free and compulsory basis for all school going children; ‘if the foundation has not been truly and firmly laid, no abiding superstructure can be built”. Schools to him were laboratories. Equally important to Azad was the provision of adult education in order to “wipe out the colossal illiteracy of our masses”, more so in a democracy where uneducated electorate were a bane. Maulana Azad’s fears have sadly proven right. He gave thrust to the education of rural masses. He suggested that we borrow from the Russian experience of educating the adult population through the public media like films and radio. About madrasa education, Azad was of the opinion that the antiquated curriculum should be made sensitive to the needs of the age, so as to provide right guidance. He believed that mathematics should be included in the curriculum.

He institutionalised crucial sectors in education and culture and laid the foundation of a future network of scientific and technological institutions. He worked for the improvement and expansion of technical education in order to solve the problem of manpower for industrial and technical development. IITs are his brainchild. He was quite visionary in his remark, “I have no doubt that the establishment of this institute will form a landmark in the progress of higher technological education and research in the country.” By establishing the UGC, he aimed at the reorganisation and improvement of university education from a national point of view. Within a short span of ten years, he also established most of the major cultural and literary academies we have today: Sangeet Natak Academy, Lalit Kala Academy, Sahitya Akademi etc. Art to him was “an education of emotions” and thus an essential element in any scheme of national education. Maulana Azad, who even before independence played an active role in establishing Jamia Millia Islamia at Aligarh in U.P without any assistance from the British government and later in shifting the campus to Delhi (1934), was bound to make exemplary and invaluable contributions towards education in free India. Some of the other institutes he oversaw are IISc. Bangalore, School of Planning and Architecture; Faculty of Technology of the Delhi University etc. His birth anniversary is rightly commemorated as National Education Day.

Education to Azad was a panacea for all evil. He therefore lamented the decline in the status of teachers from ‘exalted’ to hardly better than an ‘inferior servant’. His grand education plan has as one of its foundation stones, the restoration of both respect and quality to the community of teachers as the first step towards reconstruction of education. As soon as he assumed charge of the ministry of education in January,1947, he pushed for training of teachers at a time when the government had to focus itself on the disturbances in the Punjab and later the impending division of the country. Neither the volatile ambience nor lack of funds and structures could deter him. The latter to him was an instance of ‘confusing ends with means.’ Schools could very well function in open spaces or under a tree. Nation building activities, he argued, can be deferred on account of difficulties, not education.

An Action Plan in a Difficult Era

Maulana Abul Kalam spearheaded this mission with an ambitious yet pragmatic approach. What surprised me is that instead of getting outdated in a fast-changing world, his action plan is more than relevant today. If implemented, the gap between the literates and illiterates can miraculously narrow down. For instance, in a population of roughly 24 crores, the school going population (6-11), was calculated as 2,93,72,000. Even if 3 teachers were appointed for every 100 pupils, it would require 9 lakh trained teachers which was an impossible task and beyond the government’s capacity. Azad made a fervent appeal to educated Indians to come forward as a national duty for at least 2 years. He even suggested some conscription to ensure a large supply of teachers-matriculate 1 year of service and 2 years for graduate before he or she obtains his certificate. If 2 lakh educated men and women come forward every year, in 5 years, we could have the minimum number of teachers. This being an emergency measure, Azad sought to work towards the training of teachers so that gradually volunteers are replaced by teachers who have taken up teaching as their vocation.

Language through which education is imparted was also a sensitive issue for Azad. His upbringing had not the slightest trace of English education and therefore in his own words his was “a detached view.” He agreed with Rousseau that a child can and should grasp the truth with his own insight. Though anxious to revive and uplift Indian languages, Azad was conscious of the perils of any hasty and immature deliberations. He suggested that for the first five years, there would be two official languages, one Indian and the other English, so that the Indian language could catch up.Azad was deeply concerned about the depiction of history and employment of it for dividing people and inciting hatred. History ought to be freed from “distortions and lacunae.”

Conclusion We can derive colossal lessons from the life and monumental contribution of Maulana Abul Kalam Azad. His insight into the purpose, spirit and methodology of education are very valuable and deserve both reflection and implementation even today. Our indifference to his gleaming legacy is both shameful and appalling. Maulana Azad in all earnestness provided dual leadership to the community and the country; instilling pride of both religion and nation. How beautifully he projected his own faith and did not lose his foothold against the onslaught of struggles, controversies, power and success!