November 2021
The State of the Economy: Contribution of Women To the Indian Economy 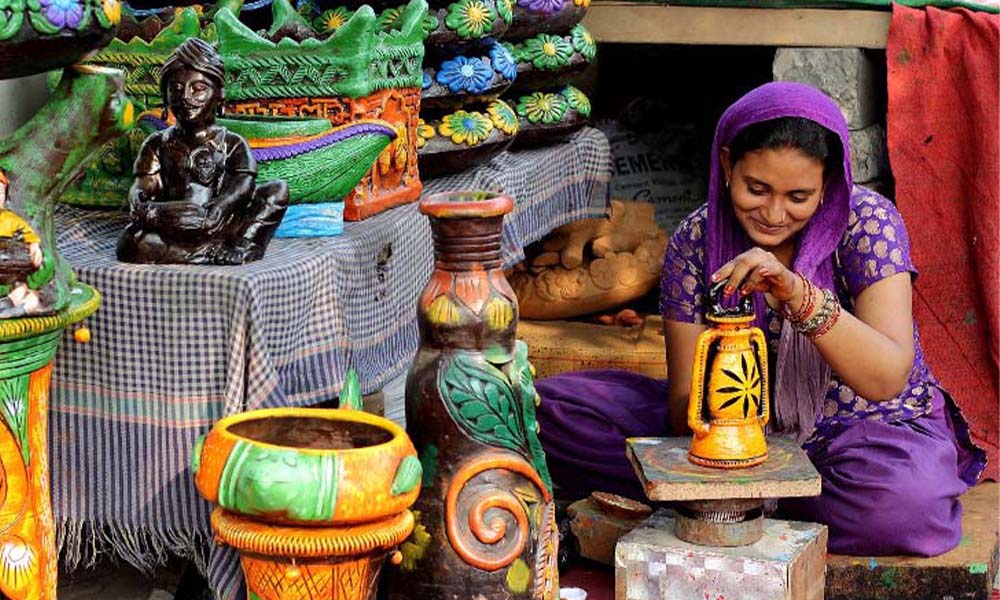 Category : Finance Special
Author : Sumna Sadaqat
The Indian constitution gives equal personal, political, social, educational and economic rights to both men and women, but being a developing nation, the empowerment of women still has a long way to go in the real sense. Women constitute 48% of the Indian population, but the labour force participation rate is merely 21%1, far lower than the world average. Although their representation is limited, but they still manage to contribute 18% to the Indian GDP2 . Inclusion of women in the economy is a requisite for the further development of the Indian economy. As official figures suggest, if women are represented at the same rate as men in the formal sector, by 2025 the economy would swell by a bountiful 27%3 . We are also aware that it is not that women do not ‘work’ but that a great deal of their work within the domestic sphere is not counted or given due credit. Women across the country shed their sweat and blood mostly without any pay but it is high time that the worth of women as effective contributors to the society is realized. Understanding the value of their economic contribution to the society is the first step towards acknowledging their hard work, sincere efforts and capability.

Since India is a predominantly agrarian country; one of the most important sectors which absorbs Indian women is agriculture. From the tea plantations in Assam to the cotton industry in Maharashtra, from cultivating wheat in Punjab to rice plantations in the South, Indian women actively engage in sowing, winnowing and harvesting crops. Majority of their work remains unrecognized by their families, society and the government as they do not generally own land and continue to work as mere labourers because of lack of share in inheritance, but women manage to not only look after their complex households, but also take ample care of their family’s land throughout the day, devoting more hours on the field as compared to men and undertake an array of livelihood activities to sustain themselves and the family. Thus, gendered division of labour is relatively liquid when it comes to agriculture, as rural women use their physical strength, mental energy and farming skills under the scorching heat, humidity and rugged mountain terrains to prepare the crop. 60-80% food is produced by women in India4 , which signifies their fundamental role not only in attending to the dietary requirements of the nation but also manifests their pivotal function in the Indian economy, heavily dependent on the agricultural sector.

Rural women are also involved in activities like dairy farming, animal husbandry, livestock breeding, enabling poverty stricken women to save money as less capital and hard work is required initially. Just like in farming, women endeavor in milking and feeding the cows and men on the other hand provide milk to the customers or retail owners. The higher female participation in the sector is also reflected by the fact that 75 million women in India are engaged in daily farming as opposed to 15 million men5 . States like Gujarat provide striking examples of women daily farmers, whose small steps have now turned into big ventures, like Mittal Patel and Gayatri Patel, who have not only benefitted themselves but also employed many other women and became role models for others.6

Most of the rural women are engaged in other pursuits like handicrafts, pottery and weaving which are some of the most beneficial income producing ventures for women. Although, most of the work done by women in this sector seldom remains unrecorded or unvalued as most of their products are sold on highways, pedestrian walkaways and in the local village markets at low prices without any official accounting. But the country wide famous fairs such as the Dilli Haat and Surajkund Mela exhibit the craft of many such skilled women workers across the country for the development of indigenous art and traditional skills. Unfortunately only a minority of such talent gets an opportunity to gain economic benefits from the same. Even educated, urban women are now using social media for promoting their handicraft business which is generating abundant monetary advantages for them. Some individuals like Aaliya Sareshwala of Hyderabad, a macramé artist with a thriving business and thousands of followers is a role model for all those women who have exceptional talent and optimally utilize it for becoming economically independent.

It is hard to forget that many women across metropolitans like Mumbai and Bengaluru are carrying out the much popular and needed Dabba Service to a plethora of individuals and family, leading to financial independence for women. This service is the mainstay of such busy cities where people do not have enough time to cook and thus, rely absolutely on the delicious tiffin provided by home chefs and dedicated women who provide home like flavor and authenticity. Unlike other domains where women’s work remains underrated, this service is appreciated and acknowledged by the family and society. In most cases family members cooperate and even help with delivering orders timely and the tasty meals are ordered by neighbours, relatives, friends and colleagues to boost confidence of the amateur chefs. Kirti Jurmani, Anuradha MS7,Chirs Kane8 amongst many others are known examples of leading Dabba Service providers. Many elderly women also actively participate in this service and for most of them it is their first job or work experience in life which teaches them proper management, skill maximization and accounting for running smoothly. These women chefs turned entrepreneurs earn money and have built their own distinct identity along with providing employment to needy women and successfully manage their set ups.

Indian educated women can be seen in various sectors such teaching, medicine, engineering, research, architecture, entrepreneurship amongst an array of other professions, but their representation is minimal and has a room for improvement. Many female graduates work in government or private sector jobs in order to be self-reliant and support their families, which is possible only with the supportive attitude of the family and friends. Especially in the more developed cities, women participation in MNC’s, smaller offices, self-run businesses, shopping stores, malls etc. is increasing by the day, but it certainly is not sufficient. Apart from these professions, it has become common to see women as police officers, administrators, metro-operators, make-up artists, tailors, shopkeepers, domestic helpers, ASHA workers amongst other fields, which leads to the development of an optimistic mindset in the society regarding working women. But the void has to be filled, as according to the United Nations women form merely 14% of the total 280,000 scientists, engineers and technologists in research development institutions in India which is a pitiable scenario, owing to the total population of women9 . Even in medicine, the ratio of those practicing against those enrolled in the course is less, which indicates to the high rate of unemployment despite of the incessant need for female doctors in India10 .

Causes of Minimal Presence in the Economy

A plethora of problems in the individual, family, social and political life of women act as barriers in the economic empowerment of women. The hindrances in the way of women while developing their financial career are varied, and each needs to be studied separately so that effective solutions for this problem can be found. Foremost being the discriminatory and patriarchal thinking which treats women as inferior beings and perceives them as merely being reproduction machines is one of the rudimentary problems which plagues the Indian society, resulting in the marginalized representation of women in the Indian economy. The lack of financial independence is directly linked with the lack of education which deprives even many enthusiastic women from taking up suitable jobs and is a key obstruction on the path of economic and individual development. The age old prejudices which regard women as impure, filthy, physically weak, emotionally vulnerable and diseased still continue to demotivate women from becoming independent working individuals. Apart from this, lack of security restricts women from working outside home or city as they are envisaged to be more susceptible to sexual abuse without any guardian. The abysmal presence of women in the Indian economy is also because of high fertility rate, high maternal mortality rate and marriage at young age. These factors contribute to the limited representation of Indian women in all spheres of life.

Way to Go Ahead

Women are working in most sectors and contributing to the growth of the country but their dormant talent is not fully utilized, which needs to be pondered upon. It is a harsh reality that many people are not supportive when it comes to career building by women, as they regard it as unnecessary, worthless and as a threat to smooth family life, and are not sensitive enough to collaborate with women in maintaining a balance between domestic and professional life. The society also demotivates females from working and sets illusory standards for them, which need to be broken for the healthy development of women. This is because the government might formulate elaborate laws or launch revolutionary schemes but their functionality and effective implementation is always subject to acceptability and heart welcome by the society. The government is one of the most fundamental players in this regard, and it owes its female citizens to undertake such activities which cater to the economic growth of women. It is obligated to commence some positive initiatives for the same which it has been doing like the promotion of entrepreneurs through organizing e-Haat program, allowance of females in NDA, increasing quota for women in government jobs in states like Tamil Nadu, support to training and employment program for women by the ministry of women and child development and other such women empowerment schemes, which would act as a catalyst for attracting women towards jobs and independent employment. But certainly these steps are only a beginning, and there is a long journey awaiting Indian women to achieve their dreams of self- reliance and economic self-sustainability.