November 2021
A Conversation with Aishath Muneeza 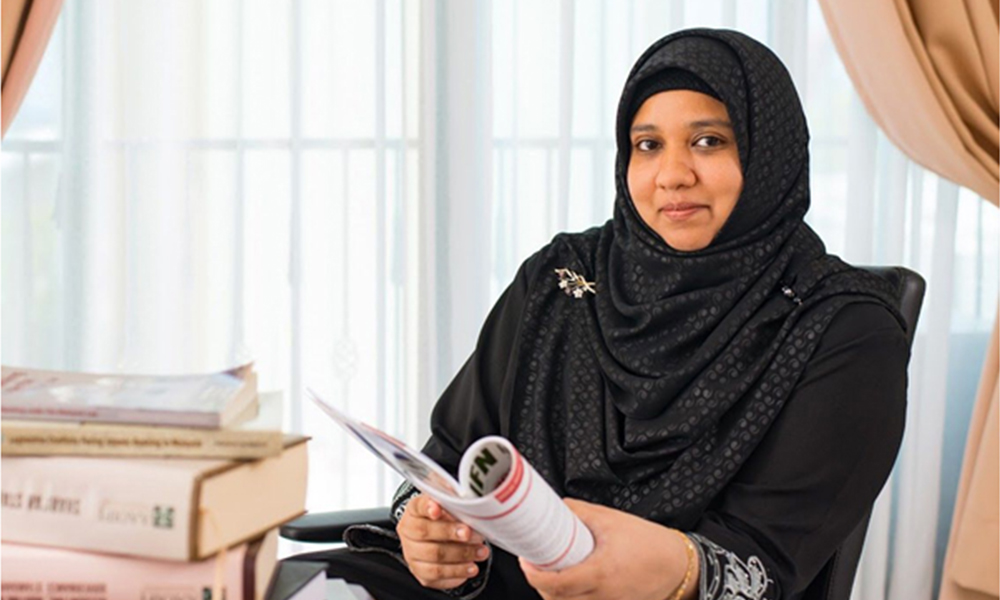 Q. You have held many positions in the finance world, as well as worked in governmental positions at the international level in South and South East Asia. Tell us a little bit about your journey and what it took to reach here.

A. While doing postgraduate studies, I was introduced to Islamic finance for the very first time in my life. At first, I found it a concept that was hard to understand, especially how Shariah compliance is achieved in the implementation of it in different parts of the world. I became curious to find out more about Islamic finance and began my journey to find answers to the questions I had via research. While doing my PhD, I applied to become a member of the Shariah Advisory Committee of Capital Market Development Authority of Maldives and I was appointed as the first chairman of the Committee in 2011. Later on, I was offered the position of a consultant to head Islamic finance developments in the Authority and I was able to successfully create the legal framework for Islamic capital market in the country. I also practically pioneered a sukuk market in the country by structuring the first sukuk of the country.

I also got the opportunity to advise Maldives Monetary Authority, the Central Bank of the country on how to structure Islamic treasury instruments and in 2013, I was able to facilitate the issuance of the first Shariah compliant private sukuk of the government followed by the issuance of the first Shariah compliant treasury bill-which was the first to be issued in the South Asian region. Later on, even the conventional hire-purchase companies operating in the country also approached to find Islamic solutions to their operations and I was able to successfully find ways for them to Islamize their operations. After creating a sukuk market in the country, I had a personal goal to create an Islamic mutual fund in the country. With this objective, I began my research to find out the most feasible way to do that to understand that there is a need to create a “Tabung Haji” or hajj pilgrimage fund in the country as there was a need to protect the money of those who intend to go to Hajj from being misappropriated by the private hajj providers.

In 2013, I was appointed as the first female Deputy Minister of the Ministry of Islamic Affairs and later, I was appointed as the Deputy Minister of the Ministry of Finance & Treasury. Currently, I serve as an Associate Professor at INCEIF, Malaysia where my ambition is to build the future leaders of Islamic finance industry by sharing my experience with them to motivate and inspire them. Today, I am also a registered Shariah Adviser with the Capital Market Development Authority of Maldives to structure Islamic capital market products and a registered Shariah Adviser at Securities Commission Malaysia. Since 2011, I have been the chairman of the apex Shariah Advisory Council of the Capital Market Development Authority of Maldives and I am the chairperson of different in-house shariah advisory committees. I am also a member of the Board Shariah Committee of CIMB Islamic, Malaysia and Munich Re. I am also a member of the Public Interest Monitoring Consultative Committee (PIMCC) of the Accounting and Auditing Organization for Islamic Financial Institutions (AAOIFI) in Bahrain. I have also served as: a member of Islamic Fiqh Academy (National Fatawa Council of Maldives); first chairman of Hajj pilgrimage fund, Maldives Hajj Corporation Limited; chairman of Maldives Center for Islamic Finance Limited; and Islamic Finance consultant who developed the first shariah compliant Islamic microfinance scheme offered in Maldives.

Q.As the first female deputy Minister of the Islamic Affairs in Maldives, did you face any unique challenges and what was one major learning or takeaway for you?

A. Due to gender, I did not face any challenge. But to modernize Islamic funds like zakat, waqf and hajj funds and to introduce halal certification including cross-border acknowledgement to our local newly introduced halal logo were tasks that required patience and efforts to educate the policymakers and public. The major takeaway from the experience I had is with passion, commitment and perseverance there is nothing one cannot achieve. Gender is not an inhibition to achieve our targets and what is really important is to have the capacity, knowledge and experience required to drive them. Of course, to gain trust, you have to prove yourself and once you prove, then you will be acknowledged for who you are. Facing challenges is part of life and being positive throughout the journey in our lives is what is required to be successful. If you are told the reasons why you cannot do something, then your task should be to prove them wrong through your action by showing them the way it could be done. This is especially the case when you embark on a journey to bring a new change or an innovation.

Q. Islamic finance and Islamic banking are not necessarily well understood terms, especially in the Indian context. In a heavily interest driven, even corrupt financial system such as India, what solutions can Islamic finance offer?

A.Islamic finance has the potential to offer ethical, social and equitable financing to all without over-exploiting each other by charging interest which is prohibited in Islam. There are two branches of Islamic finance: Islamic commercial finance and Islamic social finance and if properly implemented can achieve financial inclusion and real economic activities will be promoted. The evidence of this is seen during this pandemic where it is visibly seen that Islamic finance is different from conventional finance where after an asset is sold to the customer using debt based Islamic finance contracts, the price of the asset cannot be varied to make more profit despite the implementation of debt moratoriums. The Muslim population in India is huge and introducing Islamic finance in the country will provide them with the opportunity to access financing.

Q. Speaking on a more local level, it has been observed that many Muslim women, particularly in areas with Muslim organisations and banks, become very aware of their financial rights in terms of shariah, and try to save, budget and implement such norms in their own houses and families. Simultaneously the cultural pressures of society often push families into great debt. What advice do you have for women in such situations?

A. From an Islamic perspective, one should not only earn halal income; but also, should save it in a halal way while increasing it by doing investments to ensure there is a sustainable income received to live in this world and doing investments by spending them on those who are in need to ensure that there are enough rewards received for hereafter. Islam discourages taking debts except in case of necessity. In circumstances where one has no say in the way in which she could manage the household finances, it is important to take care of one’s own self’s financial sustainability by instilling the culture of saving and managing the wealth in a sustainable way. Financial independence is important. Therefore, my advice would be to turn the little they have into an income generating activity that could be managed within the household and to lead the life in such a way that progressively, they could attain financial independence. It is important to start from somewhere as we have the power to change our situation provided that we work towards that. Islam has given the liberty to women to have their own financial independence and therefore, within the parameters of Shariah we ought to work towards that. It is important to teach women in those circumstances and in general, the basic skills of financial and wealth management.

Q. Many financial issues crop up within marriages with little transparency or clarity, with women being deprived of their rights of inheritance, mahr etc. Is the situation similar in the society you work in, and what have been possible solutions for women to be aware of, and avail their God given rights?

A.Education and awareness are important to ensure that we know our rights. There is no other alternative to this. Fortunately, in Maldives where I was born and in Malaysia where I am currently residing in, women are very progressive. It would not be wrong to say that men and women have equal opportunities and they have the right to choose a spouse as well as work for livelihood with no cultural and legal restrictions. To attain that level of independence for women in societies, what is required is not only to teach and educate women about their rights; but even men need to be given such knowledge to ensure that they themselves do not infringe them. Respect towards each other living in the society, irrespective of the gender, needs to be created and since, men are guardians of women, men need to be taught how to become responsible towards women. If men are taught this and if they become responsible, then no woman in the society will be infringed of her rights. We need to bring up our children by teaching them through our words and actions that men and women are equal and it is piety that makes one superior over the other. Often, in some countries, within families, male children are treated as “kings’’ while female children are treated as their slaves and this kind of treatment leads to bigger issues when they grow up as wherever they go, they tend to practice this same “culture” making society an uncomfortable place for females in all places including in their own house. The perception that men are superior to women or women being inferior to men needs to be eliminated by showing positive examples in societies. Therefore, in societies like that, to start with, exemplary women role models can be shown to young girls to inspire them from the history of Islam and contemporary times and this approach over time will make them understand that they themselves have to voice out for their rights and there is nothing wrong with that. I understand that it is easy to say all these, but for implementation there are many challenges.

Q. Finally, it has been observed that most of the pioneers in the field of Islamic finance have been men. Is this true in your experience as well, and if not, tell us about some women scholars and experts you may have learnt from and we can learn from as well.

A. In most of the countries except few like in Malaysia, it is true. However, that does not mean that there are any restrictions for women to excel in the field. I was fortunate to study from respectable female scholars in the field. One of them is Professor Dr Rusni Hassan, Dean at IIUM Institute of Islamic Banking and Finance, International Islamic University Malaysia. We have published a number of research papers and books together and today, we sit in some of the Shariah Advisory Committees together as well. Associate Professor Dr Magda Mohsin is another female figure with whom I am fortunate to work with at INCEIF, who is a subject matter expert in Islamic social finance especially in waqf. She practices what she preaches and I am fortunate to participate in impactful projects to assist the poor and needy and provide good to the society. Ms Fathimath Shafeega, the former CEO of Capital Market Development Authority is a female leader who motivated me to remain in the field.

Gender is not an inhibition to achieve our targets and what is really important is to have the capacity, knowledge and experience required to drive them. Of course, to gain trust, you have to prove yourself and once you prove, then you will be acknowledged for who you are.