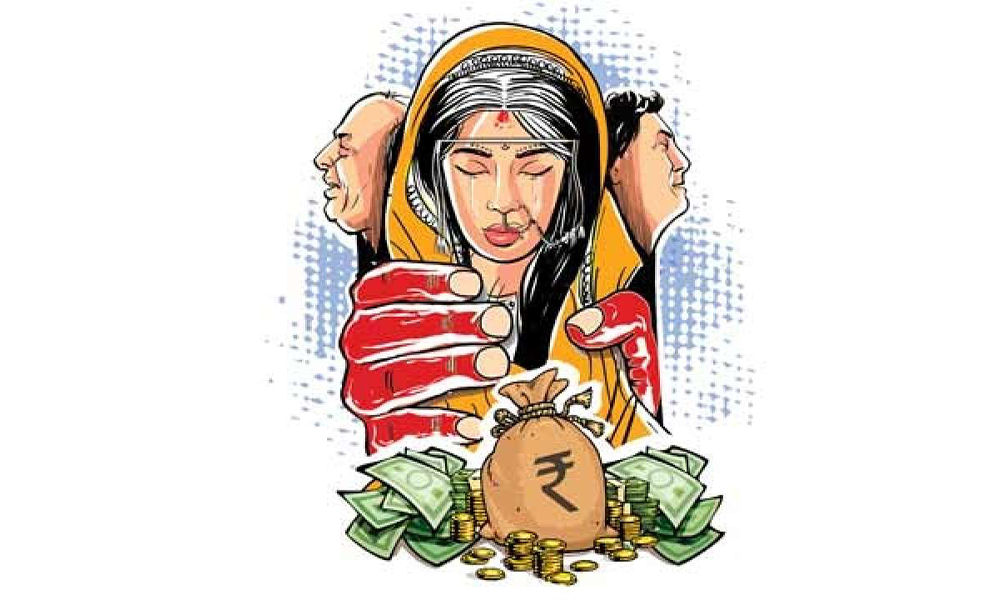 Category : LEGAL DESK
Author : Mehboobi Patel
What would people say? This is the biggest and most persistent query which arises in the minds of people, not only in the matter of dowry but in every sphere of life. The question of what people would say has been a force powerful enough to even outdo the fear of the law. In a nutshell, many people are not really in favour of giving dowry but just to satisfy people’s desires and to shut their mouths about the ‘honour’ of the family and the girl, they follow the practice.

Social evils like dowry are rapidly undermining the precious meaning of marriage. The primary aim of marriage in every religion of the world is to establish the togetherness and mutual support of two people. “Dowry”, means valuable assets, given by the bride’s family to her in-laws or husband before/at the time of/after marriage; this can be a one-time affair or never-ending unwanted rituals. The assets consist of money, gold, furniture, property, and all the valuable things which sometimes have to be supplied continuously. According to Nelson Mandela, “Education is the most powerful weapon which you can use to change the world.” However, on further perusal, I believe that even education is not sufficient to eradicate dowry from the roots of our culture, because it is strongly deep-rooted in the minds of people. Although people are aware that giving or receiving dowry is illegal, they still hesitate to take a step against wrongdoers despite the effective enactments/provisions that exist in the country in the form of law.
Factors behind the consistent practice of dowry in society There is a multitude of factors behind the practice of dowry: to be seen as equivalent to each other, to maintain pride, honour and dignity, to get the respect of the groom’s family, to ensure the happiness of a daughter, “we have to give because they have given…” etc. Other reasons can include poverty. Sometimes, not only middle-class families or rich families are involved in the practice of dowry, but poverty also is the reason to encourage dowry. There are families who have not even fulfilled their basic desires for a long time because they spend their basic pay in the education of a male child of their home so that he would earn a good amount of money. If he is educated and married to someone, then that bride would bring dowry in the form of furniture, electronics, vehicles, jewellery and money. As if that was not enough, some families expect dowry from their daughter-in-law to give to their daughters because they cannot afford the daughter’s marriage. Secondly, greed has always been proven to be a deadly sin. It never ends until the greedy person’s life ends. Some people are already living their life satisfactorily but in the greed of getting more and more, they end up committing a grave sin and encourage others also to do the same. In this way, society is getting jinxed by the curse of women and their families. What would people say? This is the biggest and most persistent query which arises in the minds of people, not only in the matter of dowry but in every sphere of life. The question of what people would say has been a force powerful enough to even outdo the fear of the law. In a nutshell, many people are not really in favour of giving dowry but just to satisfy people’s desires and to shut their mouths about the ‘honour’ of the family and the girl, they follow the practice. In addition, sometimes it is done to carry on the orthodox culture; people say that we usually feel honoured to carry on our orthodox mindset, we want to do something because our ancestors have been consistently doing it. All this is despite the knowledge that it is against the law.

There is an Indian anti-dowry law that prohibits giving or receiving dowry which is titled as Dowry Prohibition Act, 1961 which got recently amended in 2008 to bring the changes as per the current circumstances. Our country also has penal provisions under Indian Penal Code. Through this, we can see that the lawmakers have taken all the possible steps to prohibit such an evil, so where are we lacking in the removal of dowry from our culture?

Let’s have a glance at the definition of “Dowry” as per the Dowry Prohibition Act:

[in connection with the marriage of the said parties, but does not include] dower or mahr in the case of persons to whom the Muslim Personal Law (Shariat) applies. 3 [***] Explanation II. — The expression

The anti-dowry Act has provisions that help a victim to take action against dowry. Additionally, the Indian Penal Code has the provisions for the punishment of offenders who abet dowry death. Many cases are ending unreported due to our cowardness towards taking action against the wrong culture and the wrongdoers.

Do victims avail legal remedy? In my opinion, dowry victims do not avail the remedies on a large scale due to various factors such as the lack of awareness of the availability of legal remedies under the law. Though the executive of our country has notified it in every possible way, still some people have zero knowledge of their rights. There is also a lack of audacity to step out against the wrongdoers in the fear of the bride ending up spouseless or facing delay in marriage and to maintain the relationship of marriage since marriage is said to be sacred relation which people endeavour to save. People hesitate to take action since they want to carry on the tradition left behind by their ancestors. There are a huge number of dowry cases filed in the Indian courts. Now, it might occur to you that in the above paragraph I have mentioned a large number of people avoid taking action against wrongdoers. I visit court frequently and even my working experience shows that generally, domestic violence cases and matrimonial disputes are accompanied by dowry allegations. In a nutshell, rarely do dowry victims take action before or at the time of marriage but if the situation becomes worse after marriage with the consequences of abuse and cruelty, only then do people realise to seek legal remedy. We live in a country where “Prevention is better than cure” is rarely followed and compiled with, instead, we believe and chant “fortune favours the strong”, which means if fortune does not favour us despite being strong and bold, only then we turn to seek assistance from the law.
A soul-shaking incident A girl, the only daughter of her parents, has been brought up like a princess and has had every dream of hers fulfilled. She fell in love with a boy on a social network app which resulted in a love/arranged marriage after a lot of efforts and appeasement by both of them. Both the families are wealthy, the girl’s father was willing to give his daughter every amenity which suited their honour. The father gave around 200 tolas of gold, clothing, personal accessories including makeup products, artificial jewellery along with furniture and other valuable assets, and hosted a wedding in a huge banquet hall with around 1000-2000 wedding guests. This meant that overall, he spent more than a crore on his daughter’s wedding for the sake of her “happiness”, since the wedding was fixed on the behest of the girl and boy and for their happiness, both the families agreed to tie their knot. After marriage, the girl started to realise that the groom’s family seemed to hate her and they showed rudeness to her, and it was a completely new life for her which was unpleasant since she had been treated very respectfully and brought up with utmost discipline in her parental home. Gradually, she came to know that it was all about the vehicle worth Rs 20L which she didn’t get from her family despite the demand made by the groom’s family before the solemnization of marriage. The groom claimed that the bride’s family failed to give him respect when he visits their home. Within five months of marriage, the girl found out that she is pregnant and went to get some rest at her parental home after facing some health issues. After that, the groom’s family and husband never tried to take her back to their home. When she required the personal presence of her husband at the time of pregnancy, he never turned up due to his cowardly behaviour, despite the knowledge that there was no wrong on her part. This incident makes me wonder to what extent people may go to fulfill their worthless demands by making someone’s life hell. Like this girl, many other precious lives are turning to torment.
My suggestions If my words ever reach the legislative authority, the following would be the recommended provisions to be included in the Act: 1) Any couples intending to agree to marriage regardless of religion, shall before the solemnization of marriage, execute a memorandum of understanding stating that the marriage is free from dowry and if any valuable assets which the bride’s family is willing to provide out of their free consent, shall be mentioned in that memorandum of understanding and file the same with the registrar of marriage to get the approval. (This provision would help in avoiding unnecessary allegations which are worthless and usually accompanied in women related cases and raised only to trouble the groom’s family) 2) Invitation cards of every marriage along with the copy of approval received from the registrar of marriage shall be submitted to the nearest executive department (Police station or any authority which legislature may appoint for the purpose) to maintain the record of marriages and to ensure that the marriage is free from dowry and demands. 3) The marriage halls shall allow booking only if the parties to the marriage submit the above-stated documents. 4) A person authorised to solemnise marriage shall ensure that all the procedure has been complied with and proceed for solemnization. (Person herein such as pandits, Qazi and others) 5) And any provisions which the authority deems fit to curb and evade the dowry system from our country. The above recommendations might seem funny and time-consuming but to curb the evil like dowry and to reduce the burden of our legal system, it is very essential to consider amending the dowry law to make it more stringent.

Here I would say, for the upliftment and change in the nation the government alone is not is not responsible to prevent social evils but the citizens equally play a major role. We just cannot blame the government for losing our close ones, when we are the reason for spreading such an evil. The truth is, no evil can be stopped easily at once but we can take small initiatives. Being parents, we should all teach the importance of marriage and the worth of a partner in their life so that gradually we would be able to weaken the existence of dowry in our society.
Lastly, I would conclude that unfortunately, dowry is a product of both the willingness of people and social influence over them. Other than raising our voices against the dowry system in unison, no other options are left. Dowry can not bring happiness to a daughter. Instead of spending on dowry, spend your money, time and efforts on providing education to your daughter, fulfilling her dreams, letting her learn all the ups and downs of life and teaching her the best way to tackle the problems. Always stand by her when she needs your help. Put an end to the idea that is summarized in the popular quote that parents sometimes say: “ye to paraye ghar ki amanat hai” (she belongs to someone else’s home). In turn, the in-laws say, “paraye ghar se aayi hai” (she has come from an alien home). Let’s put an end to this sentiment and the violence that follows.