December 2021
The Rise of Islamophobia in Assam 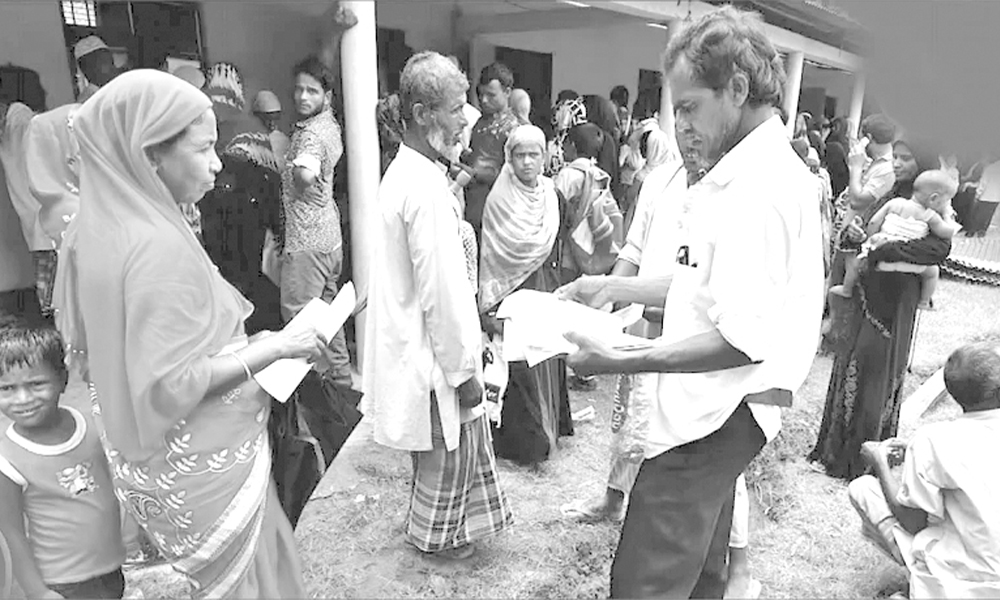 The plight of most persecuted and inhumanely harassed
Bengali Muslims of Assam who faced state structured disenfranchisement exercise NRC is highly miserable.
Each day, Assamese nationalists build new conspiracies to delegitimize their existence. Stateless, homeless, fighting for survival and one square meal, they are projected as illegal Bangladeshi settlers, encroachers of land, and termites who might overcome the existing political supremacy in the state.

Assam, is understood in popular imagination as the land of Shankar-Ajan (Hindu and Sufi religious saints of Assam respectively), which describes this state as a place of unity and tolerance with no room for divisive politics. But many do not know the deep rooted decades old Islamophobia prevalent here, which has very often resulted into numerous Anti-Muslim genocides and massacres. Islamophobia in Assam is multidimensional, and while accompanied with Xenophobia and Assamese ethnonationalism, it gets a new caricature. The national Hindutva groups are wrapped up in a veil of Assamese ethnonationalism in order to get legitimacy from the regional intelligentsia so that they can fulfil their agenda of hate politics against Muslims in Assam, more particularly Miya Muslims.

Soon after the BJP government came to power in Assam consecutively for the second time in 2021 under Himanta Biswa Sarma, the government of Assam filed a petition in Supreme Court of India for the re-verification of Final NRC published in 2019. To deteriorate further the lives of Muslims, the Government of Assam is using targeted forced eviction of Muslims as a state policy. The Assam Repealing Act (ARA) 2020, putting the career of Lakhs of students in a dark uncertainty, closed Madrassa Education without any planning and discussion with different stakeholders. Cow protection law also banned the consumption of beef and its transportation for business purposes. All these series of deliberate Islamophobic state policies need proper analysis.

The plight of most persecuted and inhumanely harassed Bengali Muslims of Assam who faced state structured disenfranchisement exercise NRC is highly miserable. Each day, Assamese nationalists build new conspiracies to delegitimize their existence. Stateless, homeless, fighting for survival and one square meal, they are projected as illegal Bangladeshi settlers, encroachers of land, and termites who might overcome the existing political supremacy in the state.

After running a decade-long propaganda that Lower Assam is occupied by Illegal Bangladeshi immigrants, Assamese ethnonationalists, supported by regional chauvinist intelligentsia, made a state run disenfranchisement exercise like NRC possible in Assam to make stateless citizens. The arbitrary nature of the Foreigners Tribunal is known to all, which is responsible for declaring someone’s citizenship. The members of Foreigners Tribunals lose their jobs if they don’t declare a large number of Citizens as Foreigners. A report submitted to the President of India by SK Sinha, a former Governor of Assam influenced much of the work of these tribunals, which falsely claimed that 6000 Bangladeshi immigrants migrate to Assam every day. Assuming his report to be true, the Supreme Court of India scrapped the IMDT (Illegal Migrants Determination by Tribunal) Act in 2005, which was allegedly said to be the protector of Muslims against the biased decisions of the Tribunal and was a hurdle in the detection process of Foreigners.

Forced eviction in Assam is not new. It is not something which is introduced by the BJP Govt. against Muslims. But forced eviction as a state policy against Bengali Muslims has been introduced and executed aggressively by the BJP government. Eviction regime was brought into execution in full force when BJP Government failed to disenfranchise their assumed imaginary number of 40-80 lakhs Illegal Bangladeshi migrants with the help of NRC, which excluded only 19 lakhs people from the final list. So, the BJP government is using forced eviction as a state policy against Bengali Muslims to make them landless initially, and eventually to render them homeless, by denying all the basic human rights enjoyed by the citizens.

These people, mainly temporary residents of one Char (Riverine Island) to another, often get washed by the Flood of Brahmaputra and its tributaries every year. The Government never provides them with permanent reserved land and leaves them as landless for generations.

It is necessary to understand the nature of flood and soil erosion in char (riverine island) areas. During flood season, many times a complete char (riverine island) disappears, displacing a large population. The settlements in char areas are set up on a temporary basis, as dwellers wait to see whether their island would survive from flood and erosion. These people often migrate to areas where chances of erosion is less, and there they are seen as doubtful citizens or foreigners. Assamese newspapers publish headlines with large letters proclaiming how a Bangladeshi village came into existence in a certain area overnight.

Decades-long development and contribution of regional intellectuals towards Xenophobia leads chauvinist Asomiya Jatiyatabad (Assamese nationalism) and deep rooted Islamophobia which resulted in NRC in Assam and later to be initiated in the whole of India, which is going to be a Genocidal Rohingya II version if it comes true.

Whatever happened with Shaukat Ali, a 68 year old Muslim man on April 8, 2019 is not an isolated incident. On that day, Shaukat Ali was forced by a group to consume pork at Biswanath District of Assam. They did this to Shaukat Ali as he was a ‘Doubtful’ Citizen, a Muslim, and an ‘illegal’ Bangladeshi immigrant, a ‘termite’, an ‘illegal encroacher of land’ – land can allegedly only by Bhumiputra (son of soil/Indigenous people).

The word ‘Madrasa’ is an Arabic term. Its meaning is educational institution or school, one that imparts to students. The Madrassa system of education is not an isolated one, but it is supplementing the mainstream educational pattern. They are providing access to elementary education for the most deprived people, most of whom live in rural areas, where avenues and opportunities are limited. Many of these Madrassas are in such areas where there were few or no schools. This is when the community came forward recognizing the importance of education and created access for students, the majority of whom are first generation learners. These Madrassas had successfully synthesized the religio-cultural needs of the Muslim community along with modern concepts in education.

Sanskrit education is not being affected in a similar fashion, and by wilful misuse of Article 30, Sanskrit Tols will now be regulated by the newly established “Kumar Bhaskar Verma Sanskrit University”, even as Madrasas are closed. In fact, there is a full-fledged Department of Vedic Studies, which teaches Geeta, Vedas, Upanishadas, Puranas, Ramayana, Mahabharata etc. But Qur’an and Islamic Theology, which is protected under Article 30 and cannot be arbitrarily closed by the Government, is being attacked.

Cow Protection Law Barely three months after the Bharatiya Janata Party was re-elected in Assam, the state government moved the Assam Cattle Preservation Bill 2021 to protect cows. Whatever happened with Shaukat Ali, a 68 year old Muslim man on April 8, 2019 is not an isolated incident. On that day, Shaukat Ali was forced by a group to consume pork at Biswanath District of Assam. They did this to Shaukat Ali as he was a ‘Doubtful’ Citizen, a Muslim, and an ‘illegal’ Bangladeshi immigrant, a ‘termite’, an ‘illegal encroacher of land’ – land can allegedly only by Bhumiputra (son of soil/Indigenous people). Chief Minister Himanta Biswa Sarma introduced this Bill on July 12 and replaced The Assam Cattle Preservation Act 1950, with the allegation that previous Law doesn’t have adequate protections to regulate the slaughter, consumption and transportation of cows. The new Law restricts the sale and purchase of beef in regions occupied by non-beef eating population and inside a 5-km radius of a Temple or a satra (Vaishnavite religious place). The enactment further determines a restriction on highway transport to and from Assam, without legitimate records. Also, more than 60% students’ intake in the Arabic Department of Guwahati University and Cotton University come from Madrassa backgrounds. Now with the closing of Madrassas, the number of students in the Arabic Department of Guwahati University, Cotton University and in general in all the Colleges and Universities with Arabic Departments will be very less. As a result, the Government will get a new excuse to close down Arabic Departments of various Colleges and Universities citing less number of students.
The overall dire situation of Muslims in Assam points to a long history and legacy of institutionalized violence and exclusion; the NRC and other legal steps are only a culmination of this history and have to be recognized as such.