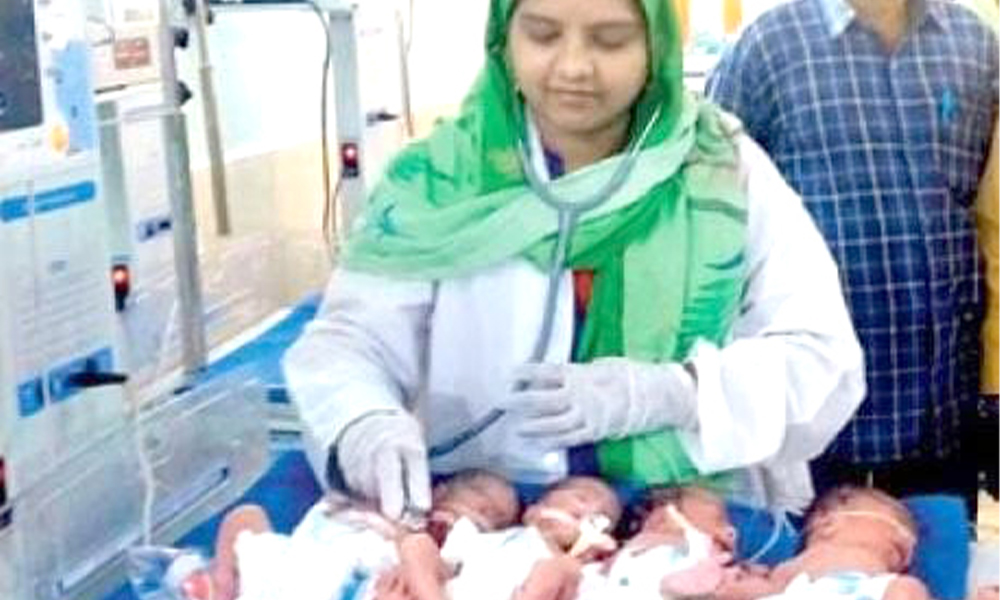 The most feared disease on the planet is cancer. If a person is diagnosed with it, the word strikes a terror in them. The reality is that, great strides in the treatment of various types of cancers have been made by medical sciences and while it is undoubtedly a very serious and possibly life-threatening condition, it is no longer a death sentence to a patient.

There is no part of the world that is immune to cancer. India ranks at number 3, while China and the U.S.A. are the leading countries for cases of cancer. Approximately 1 million new cases of cancer are reported in this country every year. Of this number, about 70% of the patients are women. Overall, approximately half a million deaths occur from cancer every year in India. There are a vast number of possible causes for the various types of cancer.

Cancer has become one of the most frequently diagnosed illnesses across the globe in the past decade. This fatal disease is spreading at an extremely fast pace. As per World Health Organisation (WHO) data, cancer is the second leading cause of death, which is responsible for an estimated 9.6 million deaths in 2018. About 1 in 6 deaths across the globe happen due to cancer. In India alone, more than 11 Lakh people are diagnosed with this deadly disease every year and around 25 Lakh people are currently living with it.

There are more than 100 different types of cancer, but the most common of all among women is breast cancer, while men are mostly diagnosed with oral cancer. Smoking and tobacco intake alone causes approximately 22 percent of cancer deaths. At a time when the world is under the grip of this fatal disease, it becomes even more important to spread awareness about cancer. The most common forms of cancer found in India are breast cancer, cervical cancer and oral cancer.

Let us hear what Dr Parveen Mustafa, MCh (Surgical Oncology) has to say on the subject of Breast Cancer: What is breast cancer and what are the main symptoms? This is the most common form of cancer in India. While it is typically found among women aged 40 and above, it can strike any female, at any age and at any time. The symptoms of the condition vary, but the most common are changes in the size and/or shape of the breast, the development of a lump that is painless, retraction of the nipple or bloody discharge from the nipple. The main diagnostic tool for breast cancer is a mammogram which involves an x-ray image of the breast that shows and defines normal and abnormal tissue. If abnormal tissue is present, further screening and testing for cancer is advised. Modern medicine calls for mammography screening to be done on a regular basis once a woman has crossed the age of 40. All girls/women should definitely do self-breast examinations regularly after the age of 20.

What is the prevalence of breast cancer in India?

With being the most common type of cancer in women, breast cancer accounts for 14% of cancers in Indian women. It is reported that every four minutes, an Indian woman is diagnosed with breast cancer. Breast cancer is on the rise, both in rural and urban India. A 2018 report of Breast Cancer statistics recorded 1,62,468 new registered cases and 87,090 reported deaths.

What is the survival rate? Cancer survival becomes more difficult in higher stages of its growth, and more than 50% of Indian women suffer from stage 3 and 4 of breast cancer. Post cancer survival for women with breast cancer was reported 60% for Indian women, as compared to 80% in the U.S.
How is it diagnosed? Women can self-diagnose their condition and know of the presence of lumps or masses that suggest cancerous outgrowths. The very reason for a low breast cancer survival rate of women in India accounts from its lack of awareness and poor early screening and diagnosis rates.
What state in India has the highest cancer growth rate? With the latest study reports, India’s highest cancer rate is listed in the state of Kerala. Other states with high cancer rates in India include Mizoram, Haryana, Delhi and Karnataka. Mizoram accounted for the highest cancer death rates in the country, followed by Kerala and Haryana.
At what age is this generally diagnosed? As the most common cancer type in Indian women, women in their early thirties till fifties are at considerable risk to develop breast cancer, and the incidence risk increases till its peak by the time they reach 50-64 years of age.
What are the average number of cases that occur? One in twenty-eight Indian women is likely to develop breast cancer during her lifetime. It is more (1 in 22) for urban women than the rural group (1 in 60). A report stated that cancer caused 5% of the total disability-adjusted life years (DALYs) in the Indian population in 2016.

What about the young women?

It’s also more common in the younger age group. Almost 50% of all cases are in the age group of 25-50. And more than 70% of the cases present in the advanced stage had poor survival and high mortality. The numbers are staggering and constantly rising. The Indian Council for Medical Research recently published a report which stated that in 2016 the total number of new cancer cases is expected to be about 14.5 lakhs. This figure will likely increase in the coming years.

TIPS: Survival Rate The survival rates of breast cancer in India are low because the detection takes place late. The only way to change these numbers is by increasing awareness. Breast cancer is a treatable disease and chances of survival are higher if it’s detected in time. The only way to do so is by being aware of how it can be detected and early diagnosis can be done.
TIPS: Prevention: This includes leading a healthy lifestyle, being aware of family medical histories – so that if you know you’re genetically inclined towards it, you can take preventive drugs or undergo preventive surgery. The simplest way to breast cancer prevention is by being able to do a self-breast examination. Prevention is a step away from cure. Be aware, be prepared.
Cervical Cancer This is the second most common type of cancer in India and like other forms of the disease, is caused by the growth of abnormal cells in the cervix which is the lower part of the uterus that opens into the vagina. In many cases a complete cure is possible, but this possibility is present only if the disease is diagnosed at an early stage.
Let us see what Dr Nyma Sultana, Ms (Gynaecologist and Obstetrician) has to say: What is Cervical Cancer? Cancer is the uncontrolled growth of body cells and can start almost anywhere in the human body. When cancer develops in the cervix of a female, it is termed as cervical cancer or cancer cervix. Cervix is the lower part of the uterus and connects the body of the uterus to the vagina (birth canal).The lower part of the cervix (ectocervix) lies within the vagina and the upper two thirds of the cervix (endocervix) lies above the vagina. Most cervical cancers originate in the area where the endocervix and ectocervix join.
Is this common in women? Cervical cancer is the fourth most common cancer in women worldwide and second most common cancer in women living in less developed regions. World Health Organization (WHO) estimated 530 000 new cases of cervical cancer globally (estimations for 2012), with approximately 270 000 deaths (representing 7.5% of all female cancer deaths). More than 85% of these deaths occurred in low- and middle-income countries.
Where is this most common? The highest estimated incidence rates for cervical cancer are in sub-Saharan Africa, Melanesia, Latin America and the Caribbean, south-central Asia and south-east Asia.
What about India? India has a population of 436.76 million women aged 15 years and older who are at risk of developing cervical cancer. Every year, 122844 women are diagnosed with cervical cancer and 67477 die from the disease (estimations for 2012). In India, cervical cancer is the second most common cancer among women and also the second most common cancer among women between 15 and 44 years of age. Nearly all cases of cervical cancer can be attributable to Human Papillomavirus (HPV) infection. HPV is a group of viruses and one of the causative agents in the sexually transmitted infections (STIs) in men and women with and without clinical lesions. HPV types (16 and 18) cause 70% of cervical cancers and precancerous cervical lesions worldwide. Based on Indian studies about 82.7% of invasive cervical cancers showed the presence of HPVs 16 or 18 (Systematic reviews and meta-analyses of the literatures by ICO HPV Information Centre)*.
What are risk factors? Other epidemiological risk factors for cervical cancer are early age at marriage, multiple sexual partners, multiple pregnancies, poor genital hygiene, malnutrition, use of oral contraceptives, and lack of awareness. India also has the highest (age standardized) incidence rate as 22 (per 100,000 women per year) of cervical cancer in South Asia (estimations for 2012), compared to 19.2 in Bangladesh, 13 in Sri Lanka, and 2.8 in Iran.
What are the symptoms? The main symptom is any form of abnormal vaginal bleeding such as bleeding after sex, after menopause or after the menstrual cycle is over. Pain in the lower abdomen and pain during sex are other common symptoms.
How can it be diagnosed? Diagnosis is done by taking a pap smear which is a small sample of cells from the cervix to see if there are any abnormal cell growths. A tissue biopsy is also usually done. Depending on the results, other tests may be advised to reach a firm diagnosis.
How can it be prevented? Cervical cancer can be prevented by vaccinating all young females against the HPVs and by screening and treating precancerous lesions in women. In addition if cervical cancer is detected early and treated in earlier stages it can be cured.
Oral Cancer This is the third most common form of cancer in India. The country accounts for over 85% of the cases reported worldwide. Tobacco and alcohol consumption are the main causes of the development of this form of cancer. Let us see what Dr Madhavi Padma, BDS, MDS (Professor, Mamata Dental College) has to say on this subject:
What is the mean age of occurrence? 58+/- 15 years
What is the sex ratio of occurrence? 68.9 in males, 31.07 in females.
Where does it occur? The tongue, labial/buccal mucosa, gingiva, palate, and alveolar mucosa in sequence.
What are the risk factors? Principal ethological factors are consumption of tobacco and alcohol. Other factors include chronic irritation, viral infection, poor oral hygiene, occupation exposure, malnutrition and genetic factors.
What are the common symptoms? The common symptoms are chronic ulcers in the mouth, difficulty in chewing and swallowing, loosening and loss of teeth, pain in the throat and changes in the patient’s voice.
What are the chances for recovery? If the condition is detected at an early stage, the chances of recovery are higher than when the diagnosis is made at a later stage. Cancer is serious but no longer an automatic death sentence. If a positive diagnosis is made, regular cancer checkups and treatment should be done in a hospital with a specialist medical staff and state–of–the-art treatment facilities.

Be Smart, Be Safe

The top three cancers in India – breast cancer, cervical cancer, and oral cancer are all preventable and treatable. Being aware of the causes and early symptoms can go a long way in controlling the disease. Remember to see a doctor at the earliest if you notice any cancer-related symptoms.