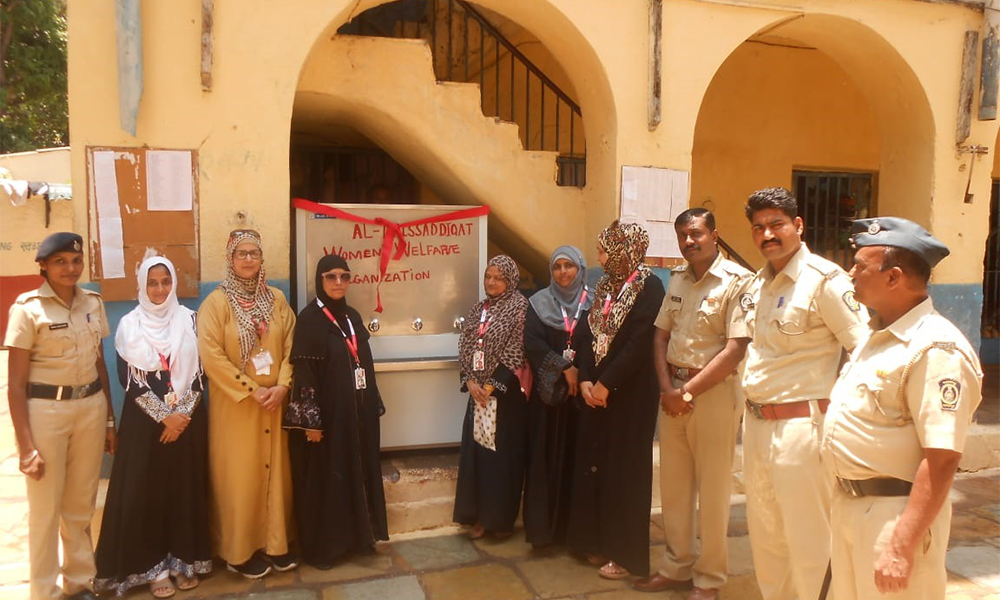 These lines are pertinent for a social organisation of Muslim women of Mumbai – Al-Mussaddiqati (The women who give charity). The all-women organisation was founded in the year 2014 by Naseema Abdul Aziz Khan to help the deprived sections of the society.

Talking about the organisation, Naseema, president of the organisation says, “During my visits to hospitals for regular check-ups, I was saddened to see the plight of the outstation patients coming to Mumbai to treat their family members. They were unable to even spend on food due to their poor financial conditions. They had to survive in extreme circumstances with no proper living space, sanitary or food facilities. So, this made me think about them and my conscience compelled me to help these people in some way.”

Naseema’s concern for these people was shared and understood by her friends who agreed to pool in money to help these people. Initially, help was extended to poor people attending to their relatives at the hospitals. Naseema explained, “The name of the organisation is itself taken from one of the verses of the Qur’an, so the main inspiration to help these people came from the Qur’an itself, where it says to feed people. Feeding people is one of the acts that is cherished by the Creator. The verses are still the motivating force to keep us moving forward.’’

Jabin, one of the founder members, informed, “The work was started by distributing rations to seven people and food to fifteen people for one month.’’

The task which was initiated by few women has now taken the shape of a bigger organisation with numerous women joining hands together to fulfil their duties towards humanity and for the sake of the Creator. “It is a non-profit independent organization. After discharging all the daily household duties, we devote spare time to serve the needy and poor brothers and sisters,’’ said Salma Rizvi, one of the founding members of the organisation.

Elaborating further on their activities, Secretary, Rubina Siddiqui, informed, “Our focus of activities revolve around the poor suburbs of Mumbai. With the sole intention of pleasing the Creator, we feed food to the needy, the orphans and prisoners.’’
The organization focusses mainly on women and children. The present activities undertaken by the organisation are arranging breakfast for cancer patients and their relatives. Explained Jabin, “It arranges monthly ration for deserving families. The arrangement of ration is done on adoption basis. An individual woman can shoulder responsibility for providing ration to a single family or more.’’

Al-Mussaddiqati plays the role of bridge between the helpers (donors) and the needy ones. It has set up a dress bank which distributes the old, neat and clean clothes among needy ones in various areas of Mumbai. It supplies cold and clean water in Hospitals and Jails. The organisation has donated watercoolers to G.T Hospital, J.J. Hospital and Byculla and Arthur Road Jails, for both the male and female sections.

The selfless work of the members of the organisation towards humanity further motivated Naseema’s daughter, Nikhat, a lawyer by profession, to contribute towards the welfare of needy people. Naseema revealed, “My daughter Nikhat counsels the juvenile prisoners and we plan to open a counselling centre where we will train girls to counsel others.”

In the month of January 2022, the organisation is also planning to begin pre-marriage counselling where the organisation would suggest marriage hall owners to recommend the newly married couples to attend pre-marriage counselling sessions. “These sessions would be free of charge from our side. The hall owners may charge nominal fees for it, if they wish.’’ Said Naseema, “We also counsel underaged girls who become prey to different social illness, commit crimes and are brought to the Children’s Home, and those who become victims of human trafficking and are put in the same Home. Through counselling, we make sure that they become responsible citizens to serve society fruitfully and take part in nation building.’’
Dwelling on the sources of financial aid, Dr. Seema Siddiqui, In-charge of Baitul Maal, said, “Al-Mussaddiqati takes help individually and collectively from women only.’’Naseema concluded by urging other women folk to come forward and join hands for this noble cause by paying Zakat and Sadaqah (charity)